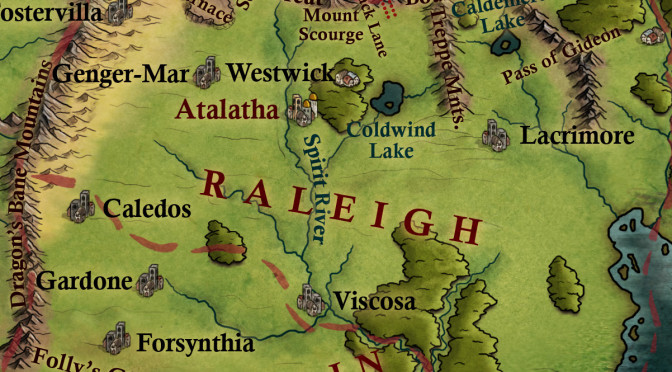 Raleigh is named after a human leader, Quintus Raleigh.  Every one of Raleigh’s human leaders since then, except for one, has been of the Raleigh bloodline.

Due to its geographical variety, Raleigh is exposed to most climate types.  The mountains at its north border, called the Great Boundary, often see their fair share of snow, while the same range has a volcano upon it called MountScourge.  A desert exists near its western border of mountains.  A large amount of rivers and forests also speckle the countryside.

The ecology is also very diverse.  Although not much of the animal or plant life found in Raleigh is unique, it is plentiful.

Raleigh is home to several races.  Draconis in general is the habitat for nearly every humanoid race on Tellest, and Raleigh has the most diverse groups of people.

Raleigh’s most populated race is humans.  After the sundering, humans began emerging from the mountainous regions around Raleigh’s border.  As time moved on, and race relations extended to the dwarves, most humans moved away from the mountains, preferring to settle near the ocean, around rivers, or in the valleys of Raleigh.

Most human settlements remain solely for humans.  There is no integration, yet there is no segregation.  Occasionally, individuals or families of another race can be found among the bigger cities, but this is no different for human establishments as it is for the other races.

Dwarves and elves are equivalent to the next most populous race within Raleigh.  Dwarves are known to inhabit many of the mountainous areas, while Elves can be found in some of the heavily wooded regions.

Orcs, gnomes and minotaurs are also known to inhabit various places in Raleigh, but on a much lesser scale than the three prime races.  There are also small tribes of other races that can be found as well.

Raleigh is often considered the center of humanity.  After the sundering of Tellest, where great storms shattered land masses and drenched the planet in water, humans exited the mountains around the country.  These humans were known as the most hospitable, and quickly made friendly advances towards the neighboring races.

Draconis itself is a continent that is very populous with human kind, especially in the countries of Gandarst, Blacklehn, and Raleigh.  But while humans within Gandarst and Blacklehn originated with nomadic cultures, Raleigh quickly developed into a hub of consistent community, and was able to develop technologically, politically and agriculturally at a much quicker pace than the other two countries.

Much of Raleigh’s camaraderie can be attributed to the leadership of Quintus Raleigh, the human leader who originally banded the country together.  He ruled the country from a small city called Viscosa, which went on to grow and become Raleigh’s capitol.  He also was responsible for the commissioning of roads (however primitive they were at the time), and lines of communication between the far reaches of the distant cities.

Nasir Raleigh, the eighth ruler of Raleigh, was the first of the human leaders of Raleigh to deal with a major war on the soil of his country.  Trollkind invaded Raleigh, with the intent on slaughtering all humans and taking their cities as their own.  Nasir managed to not only successfully defend many of his country’s establishments, but also pressed the majority of the trolls into the ocean along its south border, though some did escape into the swamp bordering the country’s southeast.

Ramelan Raleigh, the country’s eleventh ruler, was not attributed any grand changes for his nation, though while in service, the land was run with clever leadership, leaving most of the populous content.  Ramelan is most well remembered by his strange shift of personality towards the end of his years of service.  He began witnessing strange occurrences in dreams, and was not hesitant to speak of them.  Foremost, he predicted the appearance of the fallen angel, Semia’Laz, at that point still many years from manifestation.  His political support wavered, no one willing to believe the king, who was assumed to have gone mad.  With many of his people, council, and even close family no longer trusting in his opinions, he took a handful of believers, and disappeared one day, never to be seen again.

Laertes Raleigh, Ramelan’s direct descendant, and twelfth ruler of Raleigh, eventually had to deal with his father’s premonitions.  Sure enough, Semia’Laz appeared on Tellest during Laertes’ years of service.  Laertes led several terribly outmatched battles against the immortal fallen angel, and the demon armies Semia’Laz commanded.  Eventually, it was Laertes decision to abandon Raleigh, and he, together with the other races represented by the Golden Council (which included dwarves, elves, orcs, gnomes, kobolds and minotaurs), began an exodus to the mountains to flee underground.  After Semia’Laz was slain, Laertes brought his people out of hiding, and worked to rebuild Raleigh.

The fifteenth ruler of Raleigh was also the only ruler not of Raleigh’s bloodline.  Magnus Lorethal was the counselor of the fourteenth ruler, Bidouin Raleigh.  When Bidouin was murdered, he had no male heir.  The rest of the council thought that Magnus was as good a choice as any to lead the nation.

Zenda Raleigh was the sixteenth ruler of Raleigh, and was Bidouin’s daughter.  She suspected that Magnus had murdered her father, and, six years after her father’s death, proved that Magnus was responsible.  Her courage, determination and intelligence proved her worth to Raleigh’s council, and they appointed her the first female ruler of the country.

Samson Raleigh, the eighteenth ruler of Raleigh, was King during the Plague of Fire, when demons once again terrified the planet.  Supposedly, the demons believed that Samson had the gauntlets Azaros and Vialoth, and attacked Viscosa to acquire them.  He stayed within his city, defending it with his life, while he sent his wife, and his daughter, Carensa, his eventual successor, away from the ensuing battle.

The current ruler of Raleigh is Victor Raleigh, son of Gregory.  He has been in service to the nation for nineteen years, and political opinion of him is beginning to falter.