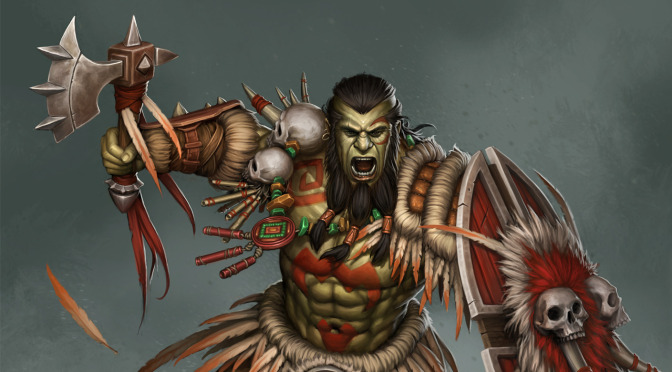 Orcs had been known for centuries as a brooding, warring race.  The rumors had begun swelling as a result of human dispassion, especially noting that orcs had only been found throughout several regions of the planet.  In reality, orcs meager beginnings mirrored the humans very closely.

Orcs appear as humans, except for their broader, larger build, and different spectrum of skin tones.

While humans’ skin generally ranges from pale white to an ebon black, orcs possess a lighter skin tone.  Common skin colors for orcs are grey, green, and brown, though some pigmentation mutations have left some orcs tinted red, blue or yellow.

Orc hair color is also different from most races.  The race’s hair tincture is only black, though as it ages, as with a human or a dwarf, the hair loses its pigmentation and begins to go gray.  Besides this, due to the condition of the areas that orcs traversed, the hair can be somewhat mangled and dry.  Orc males will often cut their hair off, or keep them short, but as they age, the hair is grown out, as a sign of seniority amongst their people.

Some groups of orcs grow their beards out similar to the way that dwarves do.  However, it is not meant to be a symbol of honor, but rather a sign of seniority and experience.  During infighting, the orcs will attempt to remove the beard of their opponent, by whatever means necessary.  Once the facial hair is removed, it is thought that perhaps the loser was not so wise after all.

The mouth and jaw structure of orcs are what most other races find most displeasing about the race’s physical appearance.  Because of two large canine teeth that curve like tusks, they seem rather piggish.  This awkward appearance can be treated by a dentist, but the more savage tribes of orcs actually prefer the look as it adds to the fierceness of their people.  This notable trait is only prevalent in male orcs.

An interesting feature of the orcs is that only the males are superior in size to their human counterparts.  Were it not for an unusual skin tone, orc females could pass fairly easily as a human.

Orcs wear fairly neutral colors, as the skin tone of the race differs so drastically.  When it comes to battle, however, it becomes a matter of substance over style.  Orcs, being naturally hardy, usually opt to wear the most protective, and imposing gear available to them.  Plate is a fine choice, usually coupled with large crescent head shields.

There are also groups or orcs who shun the idea of armor as protection, relying on skill alone to carry them to glory.  These brutes run headlong into battle, savagely obtaining victory however they can.

Orcs are thought to tattoo their bodies more than any other race on Tellest.  The colors of their skin are already shameful for the race, so tattoos are actually meant to take away from that displeasure.

Orcs also pierce their bodies, though not as much as humans do.  There are no taboos or mystical reasons for doing so.  It is purely an aesthetic choice.

Orcs share many qualities with humans.  Some scholars, however, much to the orcs’ (and humans’) dismay, have lead to the idea of the orcs of being the result of a union between human and lagano, as lagano are known for their drastic range of color as well. 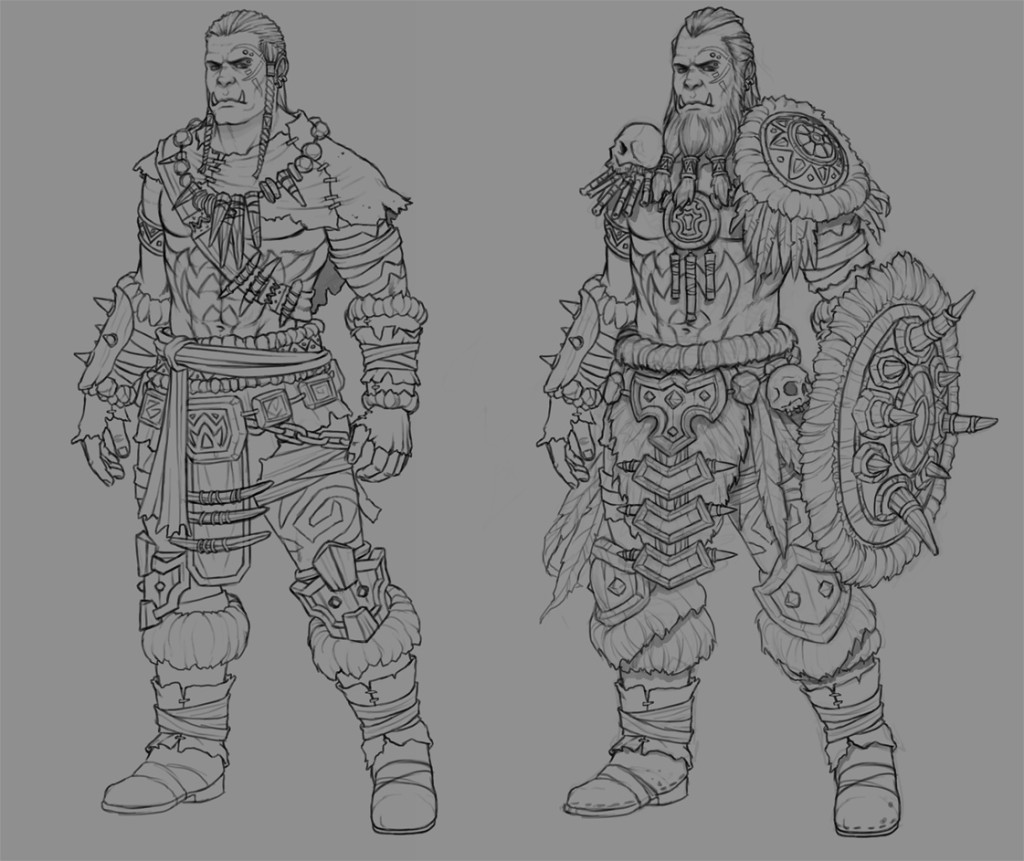 The orcs are a stoic, honorable race.  They rarely make presumptuous decisions, realizing that the tribe comes before the individual, and that shame hurts a family as much as one member of it.

Though they will fight to the death to further a cause that they believe in, they are thought to be one of the kindest races of Tellest, perhaps coming second to only the gnomes.

Orcs are loyal to a fault.  Because of the misconceptions of orc inhospitality (as well as bloodlust), many people are distrusting of the race.  However, when someone is able to overlook what they’ve heard in songs and stories, they will find someone who is willing to trade their last breath to defend their friends.

To other, unlearned races, the concept of orc romance is laughable at best.  To orcs, however, it is an important facet of existence.  Within orc culture, it is known that true love can break one’s heart just as surely as any axe or arrow could.  Orcs are apparently so in tune with their emotions that it is not unheard of for a partner to quickly pass after their mate has.

While uncommon, unions have been known to occur between human males and orc females.  The opposite, regarding a female human and a male orc is beyond rare.

In keeping with the nomadic history of their race, some orcs are not known to stay with their families for long periods of time after their birth.  However, when an orc becomes old or infirm, they will travel to be beside their offspring.  It is believed that by their passing, all of the good qualities that have been instilled in them throughout their life will pass on to their youths.

As to orc family units, they function similarly to a traditional human family.  Males perform an abundance of paying work, while females keep to housekeeping and child rearing.

Orcs live in tribes or clans.  Clans can usually be differentiated from tribes by the size of the cities they create.  The appearance of walls also helps to establish clanship to other races.

Orcs count humans and gnomes as allies among the goodly races of Tellest, but it is the dwarves and the minotaur that are most favored.

Minotaurs and orcs share many of the same spiritual beliefs.  Both are very shamanistic, and both had, at one point in their history, been nomadic.  That, coupled with the stark contrast in appearance between these two races and the remaining goodly races, has formed a bond between orcs and minotaur.

The dwarves have also become a strong ally to the orcs, mostly accomplished because of the similarities between the two races.  They are both honorable in their personal goals, both have a healthy respect for the earth, and both love the sharp blade of a fine axe.  Besides that, the dwarves are happy to have companions with strong enough constitutions to see them together with a great many pints of ale.

Orcs befriended gnomes through their interaction with the dwarves.  While the diminutive race can be seen as childish and dangerously wily, the orcs have been drawn to them, finding humor in much of what they do.

Orc relations with humans have always been tenuous, but in recent years, the humans have become much more tolerant of the more tribal race.  While formal integration in cities is a long way off, orcs are not openly shunned as they once would have been, and in some cases are even openly welcomed.

Orcs have not had many chances to interact with kaja and kobolds, but they have a regretfully strained relationship with the elves due to the elves reclusive nature. 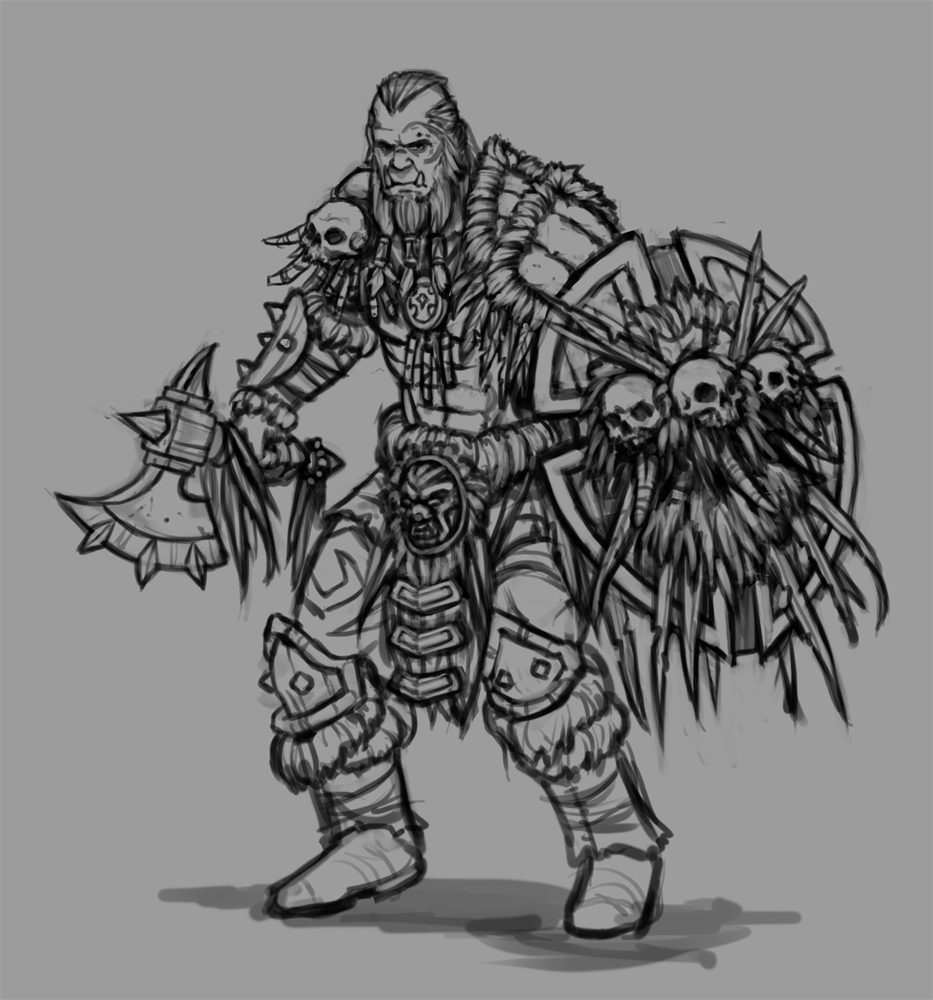 Orcs speak their native orcish, but they are also fluent in common.

Those orcs who do know how to read and write are able to do so fairly well.  However, it is a rarity in their culture.  It is usually only their priests or magic users who understand the idea of inscription.

Orcs are a rare race upon Tellest in that they believe in the common gods, but also in others besides them.  While other races would look at that as sacrilegious, orcs see no problem in it.  Most of their gods are characterized through an animal avatar.

Just as humans, orcs began their lives as nomads, living off the land and moving on, waiting for the time to come when the land would flourish again.  Over time, they developed just as their human counterparts, building elaborate cities with contemporary technology and establishing diplomatic relations with any welcoming allies they share the land with.

There is a prophecy among the orcs that one among them will lead a council of the goodly races of Tellest to a hidden land of richness and majesty, where everyone can live together in peace and harmony.

There is also a prophecy of death and subjugation to an unknown force, though none can say what causes the orcs to fall so far, or even if they can rise once again. 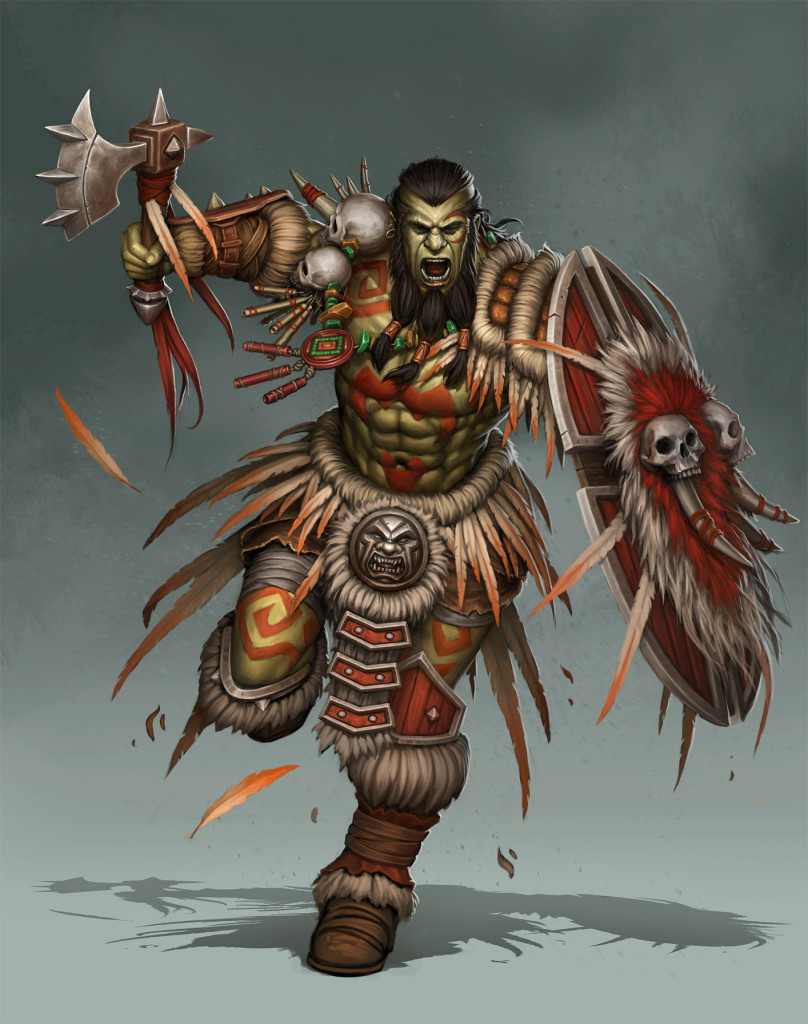 Orcs are very tribal, and thus, they do not experiment very much with technology.  They are lucky and intelligent enough to have running water, but most everything else falls by the wayside.

Medically, the orcs are advanced.  In their hatred of themselves, they have done wonders with biology and anatomy.  Those who are well educated know the finest places to stick a blade for the best amount of damage.

What the orcs lack in the extent of technology, they make up for in abundance of available branches of magic.  While orcs do not have the same relationship with gods as the human or dwarven paladins, they employ priests in great quantities.  Shamanistic and druidic magics are also a forefront of their culture.

Orc military units are known as hordes.  They attack in great number, though neither grand tactics nor formations are decided upon.  The idea of orc military leaders is to let their numbers swell over that of the enemies they would face.

Orcs are a powerful race that is able to specialize in nearly any type of weapon.  They seem to favor axes most of all, though spears and slings are also favored among the race.

As it pertains to siege weaponry, orcs like to keep things simple.  With that in mind, one of the oldest war machines they utilize is the tried and true catapult.  The orcs believe that it is easy to build and, coupled with a bright engineer, a reliable weapon.

Despite rumors to the contrary, orcs are one of the most peaceful races upon the planet.  They hunt for food, not for sport, and as long as they have a place to shelter them, conquest is rarely anything more than a fleeting thought.  With that in mind, however, they are willing to keep what is theirs at all costs.  This puts them at a terrible stand with the goblins, which have often tried to integrate with the orcs only to try and absorb orc cities as their own.

One thought on “Orcs”