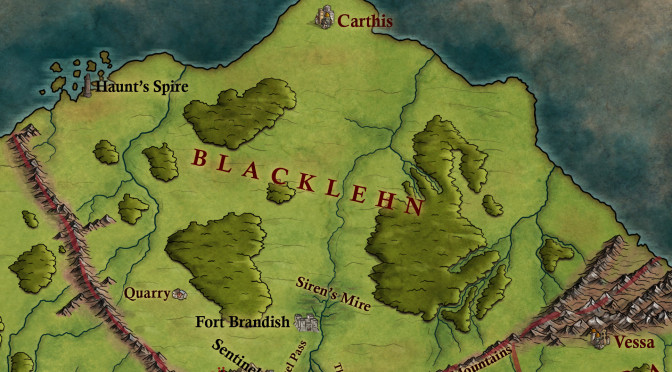 Blacklehn is called as such due to a long, narrow stretch of volcanic land that had been at the country’s northern border.  Since the naming of the country, however, that piece of land has become submerged in the ocean.

Blacklehn is bordered by mountains from its west, all the way to its southeast side.  Everywhere else, it is bordered by the ocean.  Blacklehn is one of two countries on Draconis that do not share borders with any other country, due to mountain ranges separating them.

Blacklehn is exposed to several climate types.  The mountains at its south border, called the Great Boundary, often see their fair share of snow.  Volcanic ash still litters the beaches and plains in the north.  A small desert region hugs the mountains at its southeast.  A large amount of rivers and forests also speckle the countryside.

Blacklehn’s ecology is more mild than temperate.  Though many kinds of creatures do exist within Blacklehn, during the winter months, some are known to migrate.

Blacklehn is known for being cold to races that are not human.  The sheer numbers of humans who live in Blacklehn, however, make it easier to cast out any of the outsiders who try to settle within the country.

While the other races find it hard to colonize within Blacklehn, smaller groups of people have been known to find isolated happiness within the wilderness of the country.

Minotaurs are the most plentiful of the outer races of Blacklehn.  They had originally shared the country with the humans, but most have been driven out.  Any who remain do not have traditional cities, but live underground. 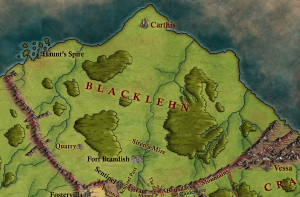 Blacklehn started as a nomadic country for humans.  The humans originally shared the country with minotaurs, along with small amounts of dwarves and elves.  The four races got along fairly well, the minotaurs, dwarves and elves being the only ones with established cities.

It took the humans of Blacklehn several hundred years to finally bring their people together, under the guidance of a tyrannical warlord named Roark.

Banishment of the Outer Races

Roark knew that humans were the most plentiful race of Blacklehn.  With that in mind, he organized a military to intimidate the other races, with the aim of appropriating financial support from them.  Roark was met with heavy resistance.  He sent his armies to begin genocide of the other races, most of who escaped over the mountains to the south into Raleigh and Cracius.

Any stragglers who were left behind were taken up and sold into slavery, most performing manual labor for the Blacklehnian dictatorship.

The Heart of Stone

Roark never knew the true love of a woman, his desires strictly carnal.  He did take a queen, once, however.  She was believed to be the most beautiful woman of all of Draconis, if not Tellest itself.  But she did not care for him at all, and he was well aware of it.

Roark used her for more than just primal needs.  He used her as a figurehead, sending her on diplomatic missions to coerce aid where none could be found.  Most of her diplomatic endeavors carried her oversea.

It was during one of her missions that she met a philosopher who convinced her to escape the terrible king’s grasp.  The two jumped ship during one of their long journey’s, and found passage on another.

When Roark was told the tale of treachery, he vowed vengeance upon his lost love.  He had two generals, a ranger named Edaria, and a knight named Ailistar track down the traitor queen, and the man who courted her.  They discovered them still sailing about the ocean, never intent on returning to any shore.

Roark was livid.  He decided on a course of action that would be fitting punishment.  The great warlord had access to terrible resources.  One such resource was a grand wizard named Senan, revered as the most prolific sorcerer in the world.  He called on Senan’s powers, the wizard turning a great portion of the ocean to sand, capsizing the vessel that the queen and her lover were on.

Roark had become bitter, and horrible to his people.  Ever since the loss of his queen, he had not been the same.  He sought to develop his empire further, the idea being to push past the Great BoundaryMountainsto the south, in an effort to begin capturing Raleigh.

The people of Blacklehn would not be commanded so easily.  Despite the eager military forces that Roark commanded, political favor swayed against his desires.  Blacklehnian citizens bound together, and created militias to fight back against the superbly trained armies of Roark.

While the people were revolting, Senan delivered terrible news to his king.  A prophecy had come to the wizard, one which foretold a great power coming from the desert that he himself had created.  Nearly three years had passed, and the desert had once again been swallowed up by water.  Hesitantly, he told his king, who only grew more anxious upon hearing the news.

Roark began sending his military forces to gather up the militias that defied him.  Those who were not slain were delivered into slavery.  One of Roark’s greatest generals, his knight, Ailistar, mutinied upon seeing the treatment of the other Blacklehnians.

Senan’s prophecy took shape as the man who had stolen away Roark’s queen lead an army to destroy Roark.

Together, the militias of Blacklehn and the man from the desert managed to crush Roark, together with his four generals.

Before Roark died, he had Senan cast a spell over him and his four generals, that they might be raised again when greed drove men hungry for power and treasure.

Hundreds of years later, Roark and his men were awakened, once again driving Blacklehn into darkness.  It took several of Draconis’ greatest heroes to send Roark back to the underworld once more, and the sting of that battle is still felt.

After the Fallen King’s second demise, Blacklehn was in a weakened state.  A huge chunk of the northern part of the country had been submerged by Senan’s magic.  The populous was separated, no longer united.

Galen Fowler, a barbarian from Gandarst, had been defending the western border of Blacklehn, but once Roark fell, he bound his men together, and took Blacklehn as his own country.