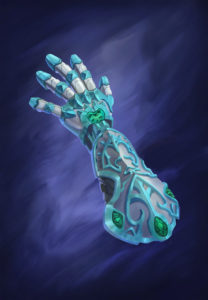 Azaros was created by Galvan, the blacksmith of the gods, along with its counterpart Vialoth.  Galvan supposedly used the lava from Mount Rockbane to forge the metal used in the gauntlets’ creations.  He then used the water from Glenborough Falls to cool the metal.

The metal itself has never been identified.  Because it has not been found by traditional craftsmen, historians have begun to refer to the god-forged metal as infindium.

According to popular scholar opinions, after Galvan crafted the two gauntlets, he moved them to a location on Draconis, where he would then guard over the two magical relics.

During the demon wars, Semia’Laz, the fallen angel, attacked Galvan in the hidden location where Azaros and Vialoth were kept.  Semia’Laz and Galvan did battle for a long time, before Galvan was finally bested, and forced to flee to survive.

Coincidentally, while the angel and the god were fighting, a goblin named Rellix happened upon the hidden cavern.  He entered the tunnels, and found his way to Azaros, unaware that a tremendous battle was unfolding just beyond the reach of his senses.  As he worked to free Azaros, Semia’Laz made his way to Vialoth.

The two wielders, Semia’Laz and Rellix, met in the middle of the cavern.  Upon seeing Rellix with the remaining gauntlet, Semia’Laz tried to slay him.  Rellix was able to use Azaros to protect himself, however.  Galvan reappeared as well, with his brother Obsam in tow, and tried to fight off Semia’Laz.  The fallen angel was forced to focus on the two brother gods, and lost sight of Rellix, who escaped into the night.

Rellix did not retain the gauntlet Azaros.  After much thought, the goblin decided to brave the racial gaps between his people, and the goodly races that had formed the Golden Council, a group comprised of humans, dwarves, elves, kobolds, gnomes, orcs, and minotaurs.

When asked why he was brave, or foolish, enough to approach the Golden Council, Rellix said that he believed the gauntlet belonged there, and warned of the encounter he had with Semia’Laz.

An elven sorceress named Myrandia Windwhisper asked Rellix who he thought Azaros would be safest with.  Rellix did not hesitate to nominate Romus for the job.  Myrandia acknowledged Rellix’ choice, and she, along with the rest of the council, appointed Romus as the protector and wielder of Azaros.

Later on, after the Golden Council had been besieged by Semia’Laz’ demons, Romus finally met the fallen angel on the field of battle.  It was with Azaros’ aid that Romus was able to get close enough to Semia’Laz to stab him with the magic sword, Archeangel, which killed him, and concluded the demon wars.

After the death of Semia’Laz, it was determined that both Azaros and Vialoth should be hidden from the reach of mortals and demons alike.  Both gauntlets were lost to the winds, and neither has been seen since.