Greetings fantasy lovers!  We’ve been checking out a few shorter books and stories over the past few weeks and months, but our next trip to the Otherworld is a doozy of an epic.  It’s a debut for its two authors, but it reads like the work of a pair of storied professionals.  The book even comes with a pretty lengthy glossary, which I’m always fond of in my epics.  Let’s get right to it and check out The Arbalest of Gamaliel.

Sibling authors J.R. and J.R. Thorpe love their fantasy, and it’s clear as anything to see in their first book, The Arbalest of Gamaliel: The Rystarr Saga The Weapons of Power Book One.  Rystarr is an intriguing world, filled with a breadth of lore and mythology that could take the writers Thorpe well beyond their planned three book series.  As much as depth as the world has, the authors have also ensured that their characters receive their due, with each of them fully realized and dynamic.  And the rest of the story blends so well together with prophecies, strange magic and growing tension. 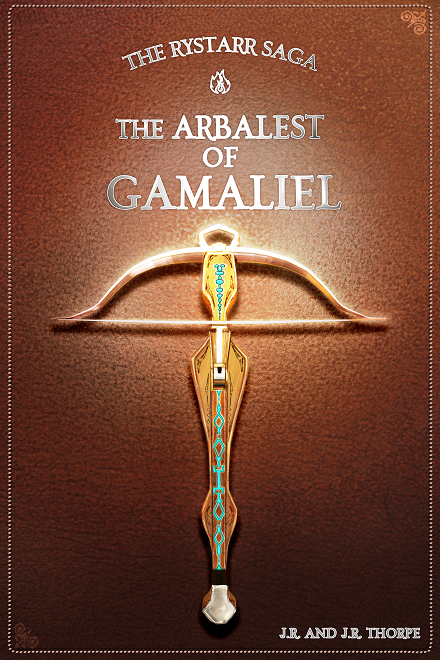 In the hollow world of Rystarr, a new millennia draws near as The Bursting soon approaches. The weapons of power have been kept hidden, their locations unknown. Together, and only together, the three weapons are the only implements powerful enough to stop the cataclysmic event from occurring yet again.

Brought together by their Godly lineage, ten unlikely heroes are thrusted into a multi-millennia long family skirmish. United, they embark on a grand quest in search of the weapons of power, facing many challenges brought forth from their enemy, Arrôz, The God of Evil.

Will the heroes locate all three of the weapons before disaster strikes Rystarr, leaving it and the surrounding planes in ruins once more? The world has ten powerful demigods on its side, providing they can learn to work together, setting aside personal ambitions and animosity. Will they succeed? The whole of the multiverse waits to see.

If you like your epic fantasies to have scheming deities, empowered demigods, deep and rich mythology and a storyline that wraps everything up with a nice bow, you’ll love the world that the Thorpe siblings craft here.  Rystarr has amazing potential, and it’s the kind of place that you’ll love to spend time in.  With two other books on the way, this series is bound to soar to even greater heights, but it all starts here.  Check out The Arbalest of Gamaliel: The Rystarr Saga The Weapons of Power Book One on Amazon today!