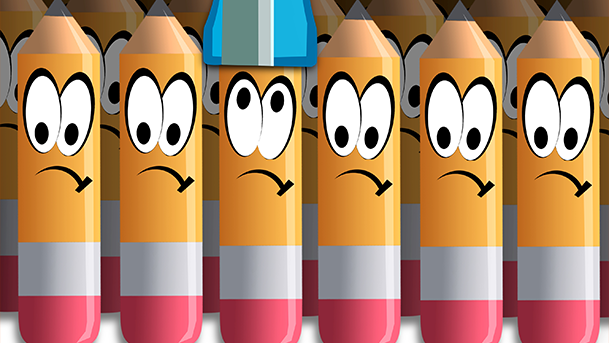 Howdy folks.  It’s a new week, and we’re starting things off in a light and breezy way with a short story that brings ordinary objects to life in extraordinary ways.  If you were hoping to start your first Otherworld trip off this week to the inside of the pencil box, today’s tale, The Uprising of the Pencils, is right up your alley.

The product of its author’s vivid imagination, The Uprising of the Pencils explores what it is like to see things come alive when we’re not looking.  It’s a touch of Toy Story, but with office supplies instead of action figures and dolls, and Nico Pengin observes the hierarchy of pencils and markers and erasers in interesting ways.

Heavily inspired by the Brain Jacques “Redwall” series, J. R. R. Tolkien’s The Hobbit and *THAT* famous grasshopper scene in “A Bug’s Life”.

It’s time for an abused population to fight for their freedom.

For humans, it’s just an old cardboard box with school utensils. For the pencils inside the box, it is San Ford, a city where they were forced to live under the ruling thumb of the Erasers. This dominant minority, headed by Ink Earl, have held their power for too long.

The self-named monarch commands brutal repressive actions against anyone who is caught conspiring or breaking the law. Dixon, Faber, and Prisma are just three of the many Pencils tired of the reigning tyranny in San Ford. But one day, the fear widespread by the cruel guards, the Markers, was no longer bigger than their wishes for rising.

Dixon’s prophetic dream reveals the existence of a powerful but dangerous weapon that could end pencils’ suffering. Is a sure victory that could lead Dixon to an early end the one alternative for pencils?

The Uprising of the Pencils is a short read, but it’s packed with plot and character development in its few pages.  Pengin also has a few clever name gags and playful scenes that would really appeal to its younger audience.  Older readers can enjoy it as well, as it is multifaceted, and has a few layers of classic writings and deeper messages sitting atop the playful story.  Check out The Uprising of the Pencils on Amazon today!

You can also find Nico Pengin’s latest on Smashwords.