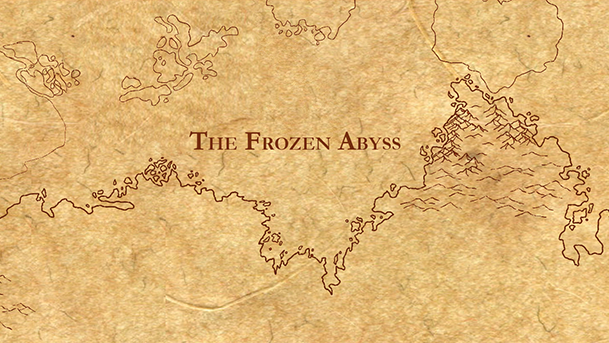 Hi there!  Alright, so I have an interesting map for you today.  It’s not the most interesting one (or our last one), but it is worthy of note because of how much is unknown about it.  And I don’t mean that just from the perspective of me, the person who worked on the map.  No, it’s interesting because of what the folks of Tellest don’t know about it.  Today, we’re looking at the southernmost and largest continent of the world.  The Frozen Abyss is an undiscovered landmass—not in its entirety, mind you, but the majority of it.  There are only a few places where the majority of races will brave a journey, and the rest is frightening indeed.

You’ll see in the map that there are a few places close to Aeratul and Algea that have a bit more of a presence to them.  This shows as hills and cliffs, and while that may seem a little uninhabitable, it’s actually the part of the Frozen Abyss that is most hospitable to the known races.  That’s because beyond these regions, the Frozen Abyss descends hundreds of feet into the bitter cold unknown.  Amidst blustery weather, it’s hard for anyone to see beyond the cliffs, and very few people on record have ever ventured below and returned.

Of course, because the Frozen Abyss is so inhospitable, there’s not a lot of people who are there, and those who are aren’t the most scrupulous people.  South of Aeratul, the area serves as a sanctuary for the exiled—note quite a prison, but certainly no country club either.  It’s the one place where it is considered in poor taste to collect a bounty on someone’s head.  And that’s besides the fact that it is difficult to get there, and filled with all sorts of dangers.

As always, we wrap up with the parchment version of the land.  In this case, the map is spread out fairly wide, because the Frozen Abyss covers so much of the lower part of the planet.  They’re not hurting from global warming on Tellest, so this combination of land and ice is expansive indeed.  This is the penultimate map that we’re showing off, which of course means in just a few short weeks, you’ll see the final map that we commissioned through Kay Fulmer.  That’s not to say we aren’t planning on collaborating with him again, but we’ve got to build up our budget again first.  In any case, we’ve still got lots of other maps to show off over the next few months… They’ll just be in a different style.  See you soon!