Howdy folks!  I hope everyone had a great Thursday in general, and for all those of us that are stateside, a good day with delicious food, and hopefully a break enough to be able to enjoy some of the other things that make you happy.  If you’re here, one of those things is probably reading great books, and I’ve got one for you today, especially if you’re into dystopian science fiction.  If you are, read on to learn more about the new book in the Era of Darkness series.

Naif Makmi has a five-book plan.  In a world where giant robots and killer AI threaten to destroy the world as we know it, it’s hard to believe humanity would be able to survive long enough to see five stories, but the human spirit is indomitable.  Revolt (Era of Darkness Book 3) is the middle point of the story, and it shows just how longstanding and vast the scope that Makmi has planned can be.  The author writes engaging characters who are always at risk of being on the chopping block, proving that the stakes are high.  And what better way is there to build a new world as an author than to burn the old one down? 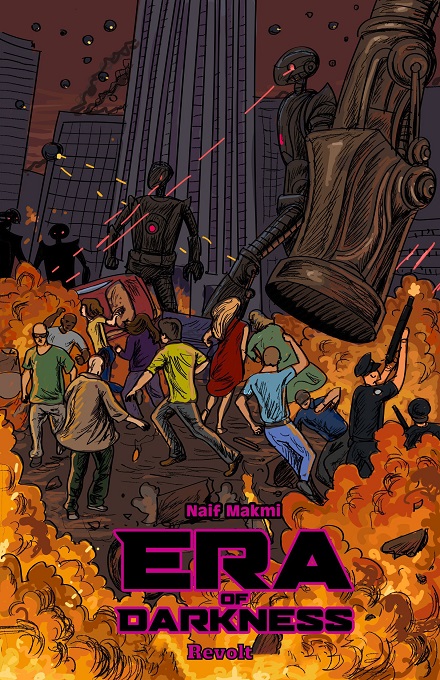 Following the death and destruction caused by the activation of the 8G network server, Damien and Estrella had to escape to Canada with the help of Eva. They met a man who had been contacted by Eva prior to their arrival and he taught them warfare. The robot population increased and the havoc and destruction which they caused were new every day. However, Phineas made it his life purpose to find and kill Damien. Damien on the other hand swore to never give up till Phineas was destroyed.

Amidst their battles and fights against each other, division was created among Phineas’ robot army and they broke out from each other without his knowledge. Their break out led to them trying to take him out and take over the whole world completely. The destruction kept increasing while Damien continued making plans to take Phineas out. With the destruction and chaos caused by delusional people who only want power, will the world get back to what it was in the past or will it be destroyed forever?

Makmi has unleashed a world in which humans have created their own worst enemies, but so too do they clamor for hope, and dream of a way to stop the unfolding apocalypse.  Though they can be frightening worlds, Makmi does allow his readers to escape with a glimmer of optimism, that the worst of what we do can be remedied, and a better life can be found.  And it doesn’t hurt that his set pieces are entertaining despite the horrors they inflict on his characters.  With two books already out in the series, and the fourth coming just around the corner (and a fifth on the way), there’s never been a better time to dive into this series.  Check out Revolt (Era of Darkness Book 3) on Amazon today!