Hey there!  I think that this may very well be the last one of our heroes that we’re showing off from the would-be Relic game.  The last time I spoke to Serathus was back in July, and I’m writing this in November.  He’s got one other piece that he did for us, but by the nature of the way that I’ve scheduled out all the other things I’m working on, I don’t even think we’ll see that until next year.  In keeping with the trend, we’re showing off characters that have just barely been touched on so far.  This character wasn’t one that I created.  It came from the mind of my wife, Rhianna.  Keep on scrolling to see more about the eccentric and adorable Cassandra. 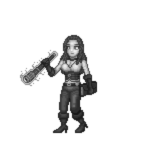 Cassandra and Edmond come from the same original property, Rhianna’s short story Spectral Tides.  If I had to classify Cassandra as something particular, it would fall somewhere between a scholar, a tinkerer, and a scientist.  She’s definitely one of those people who loves to know how the world works, even at great hazard to herself.  Luckily, she’s got Edmond to keep her head on straight and help her keep out of danger.  Right now, one of the characters that Cassandra interacted with is a supporting character in Adelia Kreegan’s Wild Magic, so there’s almost a cyclical interaction within those two groups, as Adelia’s brother Luca is the leading character in Relic. 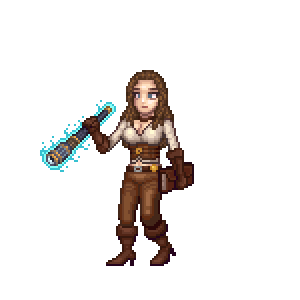 If we were going to make a game out of this content, I’m sure that Cassandra would be the most eclectic one of the bunch.  She’s not really combinative, but if we were building a brawler, there would likely have to be some things we would have to be open to.  I could see her being a very slapstick character, thunking people with the spyglass, or some other objects she might have on her person. 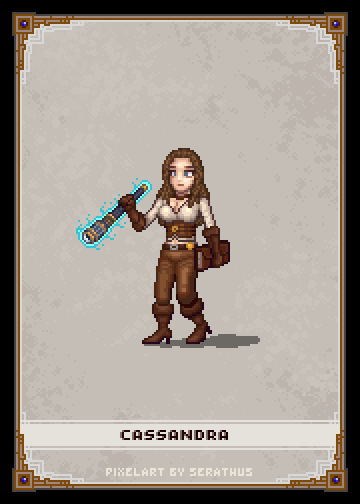 Once again, we’re closing with a card version of our hero.  As I mentioned before, this is the last hero character that we’ve teamed up with to do with Serathus.  We do have one last sprite that he made for us for one of the “enemy” characters you would run into in a would-be game, but I get a sense that it might be our last collaboration with him because of how busy he’s become over these last few months.

In any case, we get to cheer for the fact that all eight heroes were finished in this style.  I can’t wait to bring them even further to life in the book that inspired them, and if I’m lucky enough later, a game that ties everything together.