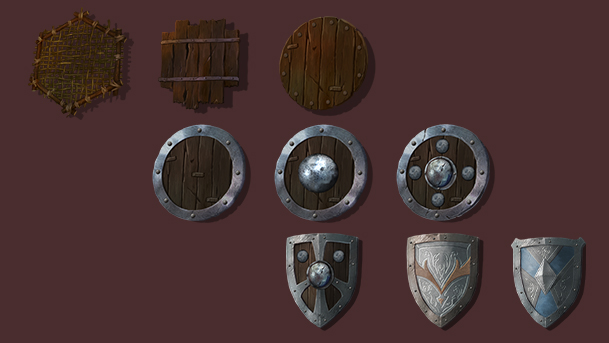 Hello there!  A few weeks back we looked at a new short series of art pieces here on Tellest, specific to Merge Dungeon.  Back then, we were looking at some of the early weapons that you could get in the late game which would enhance some abilities.  Now it’s time for us to look at the first set of defensive equipment you could find for yourself.

Just as with the weapons, we start with some pretty rudimentary items.  I think even farmhands and peasants would look at the first shield you see here and just kind of scoff.  But if you’re a lowly imp in a dungeon, you’ll use whatever you can get.  And maybe you’d just hope that the weapon your foes are using are crude too.  By the time you get to the round wooden shield, maybe you’re deflecting a few more blows before your poor shield falls apart.

Once we get into some embossing, your little foot soldiers are doing all they can to hold the line.  You’d still feel like you were getting your bell rung if you were going to take a hit from behind one of these shields, but if you handled yourself well, you’d still have your limb, and that’s pretty important.  The bosses also help to deflect and offset the blows, so that’s always a nice little thing to give to your minions.

Now we’re getting into some cool designs!  These kite shields are a little more medieval fantasy, and the look of them just pops.  I wouldn’t be totally off-base in saying that I’m likely going to steal one of these for a future character concept.  We didn’t need Sergei to go this hard with the shields, but he did, and they look great.  And if you thought these looked good, just wait till you see the more exotic sort of equipment we’re moving toward.

We’ll be back shortly after the New Year with a zigzag back to weapons.  Things are going to get a little crazy, and then the new shields really, really pop.

And keep in mind, they’ll only be the first half you actually see!