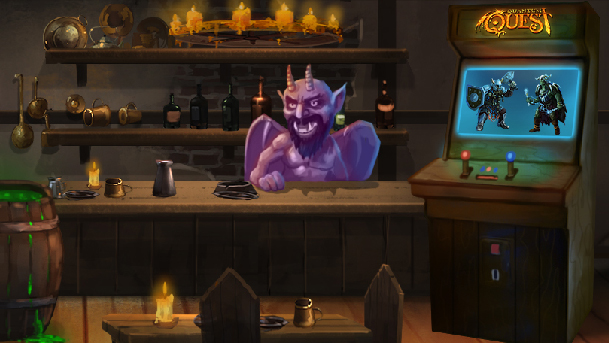 Alright, it’s time to start talking about something I think is really cool, pertaining to Merge Dungeon.  While we’re done making updates to the game for now, there’s still plenty of room for the game to grow.  I just need to build up a little more capital to make that happen.  But, our final updates (of which this is the penultimate) were pretty cool, in my opinion.

We made it so that there was another place that players could go to make permanent upgrades to their gameplay experience.  After they defeat the Arborescent boss, they are able to use the wood they gain from it to create a tavern for the monsters to go to blow off some steam.  There were all sorts of upgrades there.  Some of it allowed for better boxes and gifts that the game would send your way, others added completely new types of experiences.  As you can see here, in the first image, one of the things that definitely jumps out at you is the wheel.  Every eight hours, players are able to “wish” for something, and a random prize is given.

It’s not until our first update to the image came through that you get a bit more context about just what gives players the wish.  Once you defeat the Aetherite Lord, you unlock the ability to use his genie-like powers to make your wish.  You can also see in this update that we added a couple of other things too, including an arcade cabinet, and a change to the crates on the side.  An arcade cabinet doesn’t quite make sense in the grand scheme of things, but every now and then you just want to make a fun reference instead of staying beholden to the source material.

Our next update gave us a delivery imp with a special crate, as well as a table for arm wrestling.

It was the update after that which was one of our biggest ones.  We added a fiery bat, which you could see flying across your screen for an extra chance to get Merge Dungeon’s premium currency, changed the shape of the Aetherite’s cage to better reflect that it was supposed to be the one that you received once you beat the jailer and freed the spectral hand, added the imp arm wrestlers we talked about, showed some images on the arcade cabinet, and of course, added a barkeeper to serve demonic root beer.

Finally, we had just a few small coloring and effects changes to add to the mix for the final piece, including turning our demon bartender purple.

We still had one or two other final changes that we made to Merge Dungeon, but you’ll have to wait a couple of weeks for those.  See you soon though!