I had the opportunity to interview the author of the Fragment of Stoná series, T. Cannon.  While we learned he has a tremendous amount of work in store for himself, he gave us some of his time, and pulled back the curtain to give us more info on Artésque and what comes next.  Read on!

Tellest: Hello there.  I appreciate you taking the time to join me on this interview.  With as busy as the Artésque world seems to be, in terms of lore and backstory, this is certainly cutting into your time!

T. Cannon: It does, but luckily enough I have summers off being a full-time teacher, so I manage to find the time.

T: That’s one thing I didn’t yet know about you, and that’s pretty interesting to think about.  Do any of your students know about this hobby?

TC: They do I know I wrote one as I have a poster of it in my classroom, though due to being a teacher, I do not have copies of them in class. I normally only talk about it in passing, some have decided to read it though I typically only talk with students that graduate about it to avoid being seen as anything other than a teacher to them.

T: How did you come up with the concept of Artésque?  There is a good deal of new races that you explore and it’s tricky enough that you have your own little world bible in the form of your fandom wiki.

TC: The concept itself came out of a collection of short stories a group of friends and I made in high school. I continued with the ideas and eventually published my first book a few months after graduation. 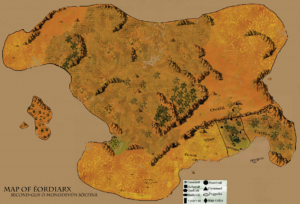 T: Do any of the other friends you wrote the short stories collection with help you with your stories or contribute in some way?

TC: We still talk and bounce ideas off one another but none care to write anything down.

T: Your first book in the Fragment of Stoná series introduces the reader to the world through the eyes of three boys from our world.  What made you want to show the world as experienced by them?

TC: The idea was to have this fantasy world through the perspective of a modern-day person. It’s nothing inherently new, but it lends a sense of grounding for reads I think; one moment there can be this big fantasy battle, the next there can be a slice of life with the characters in the book attempting to explain what a cheeseburger is. I always liked the idea of personal struggle and the concepts of guilt and regret as the main evils within a story, rather just a dragon or some physical monster. The series itself is fairly long, with ten planned books, three already published. The brothers serve as a viewpoint rather than the main characters or even the heroes/driving forces of this world.

T: Ten books!  That’s massive.  What do people say when you tell them you’re going to be working on such a large saga?

TC: The most common thing reacted when you say you wrote a book is “whoa, that’s awesome” follow thereby with silence or a joke about “but who still reads?” Being that I see how young adults react to books in a classroom setting it does not surprise me to hear it, even from adults. Knowing the size seems only to further the pointlessness of reading. The books are to me a trophy, an example of overcoming something that has been with me. I love to write, my handwriting is terrible, and my grammar might not always be on point, but I feel, and those who read my stuff, tend to say, they enjoy what I do.

T: I’m usually pretty good about tracking other books down, but I didn’t see any links for the follow-ups to this tale.  Can you let people know where to find the sequels?

TC: Same places as book one, though my publisher thought having my name as T. D. Cannon had a better ring to it, I agreed so the listing changed. Amazon and barns & nobles do not have the follow(s) listed with the same one. Last I checked, typing in “Artesque book two” still brings it up. The first books can absolutely be seen as a standalone, as such it was published first, and I gave more liberties to the publisher. For the rest of the series I will be pushing forward with more control.

T: You’ve had challenges with your writing, as you have severe dyslexia.  How has this changed the way you approach your storytelling?

TC: Contending with dyslexia is something I have always dealt with. While it helps me connect with students in my profession, it yields me no benefit when I sit down and actually plan to write. I can get several pages into a plot point only to go back and reread what I wrote, often finding the silliest of mistakes. Though sometimes it helps, as some of the languages within the series are just common words with a bit of dyslexia flair and phonetic spelling

T: It helped you write your own language!  Do you typically write the traditional way, or have you experimented with things like Dragon: Naturally Speaking, or other dictation softwares?

TC: I write the traditional way, just keyboard. I have used a few other softwares, but I prefer just the keyboard. 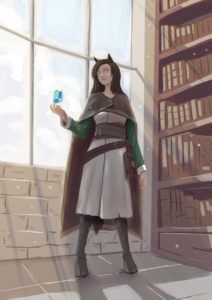 T: Obviously, this is not the last we’ve seen of your stories.  What do you have in store for readers who enjoyed the first book?

TC: For people who enjoyed the first book the second and third were published together, so anyone can continue through them. At the moment, I am attempting to find a high traffic website for my stories to be published on. I still like having the hardcopies, plus the copyright that comes with it, but I hope to have my series for free online in the future.

T: I know that at least for a while, Wattpad was big, and it allowed people to put their stories up on a chapter by chapter basis.  People would turn up for what happened next, and it let them feel more invested.

TC: I actually posted my first story to Wattpad about two weeks ago, so far, no traction. Larger online formats like that take time or you have to get in when the website first starts. I have begun looking at others.

T: Besides the challenges of writing and crafting a story, what has been the most difficult experience you’ve felt in the publishing process?

TC: I always knew I would be a teacher, even in grade school, so I opted out of social media to avoid problems. Therein lies the issue: you can’t market without a social media, at least not efficiently. I don’t regret that decision, but it makes getting the book out so much harder. 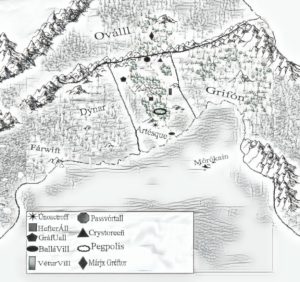 T: Have you considered putting together an author website or a newsletter to go along with your other material?

TC: I have, biggest hang up for me is being a teacher, social media can cause problems, even an author website with comments can cause issues. Newsletters are one thing, but I am still unsure how I would get the information out without some social media.

T: A lot of authors have done something like Booksweeps, where you give away your first book in the series in the hopes that they could get reviews.  You could include a link to your newsletter in the front and back matter of the books.

TC: Not a bad idea, I had done a few sweepstakes raffles with my book on Goodreads and a few other review type websites. Unfortunately, the only review I ever got from the program was comical to say the least. It was from a 60-year-old woman who said she liked the story, but that the font size was too small.

T: When did you get your start with writing?  What inspires you to craft stories like these?

TC: I have always enjoyed telling stories but did not start writing anything down until high school. As for inspiration, I generally do not like reading, but when I do, I enjoy old stuff, plays, Greek stories of heroes, old mythology, or folklore, that kind of stuff. It seems funny, but along with my spelling issues as a kid, I had issues reading. I never enjoyed third person narrative heavy books I read a lot of in school, and I do not particularly enjoy past tense or passive voice in writing. I enjoy a certain type of flow and spacing within books, which is why within my own stories I purposely chose a font size and spacing style that makes for a quick read. No one wants to read a wall of text, just the sentences above this as an example.

T: Would you consider your elaborate Artésque Wiki as more a tool for yourself, or a place for readers to explore the world you’ve created?

TC: The easiest to enjoy medium is visual, so the goal of the wiki is to house more in-depth explanations and visual representations for those who struggle with the reading. That is why I promptly feature a forward within the book discussing the language, the world, and how readers can visit the wiki to help dig deeper. The wiki though is officially a side piece for more information, as all foreign concepts/words/things are received through the eyes & ears of a “common” person within the world, which hopefully mitigates confusion. The lore is deep and expansive, the world more so, but it is presented to the reader by someone who knows the same amount as them.

T: Speaking of the Wiki, you have a lot of great art on there.  Are those works you’ve commissioned?

TC: Some of the work I had commissioned, other pieces I have done myself.

T: Thank you for taking the time out to participate in this interview.  Best of luck with your upcoming Artésque books!

TC: Absolutely, thank you for your time.

Now is a great time to check out Artésque: The Fragment of Stoná Book 1 on Amazon!  Get to it, and before you know it, Cannon will be well on his way toward delivering the entirety of this massive series!