The country of Gandarst was one of the origin countries of the humans of Tellest.  Many of the humans there were forced to become nomadic barbarians.  The strongest clan of those barbarians was called the Gan.

Gandarst is bordered on its east by a long, nearly unbroken mountain range.  There is a passage from Gandarst to Blacklehn, but travel to Raleigh and Daltain are substantially more difficult because of the mountains.  On all of other compass directions, Gandarst is surrounded by ocean.  Gandarst is one of two countries on Draconis that do not share borders with any other country, due to mountain ranges separating them.

Gandarst is generally a cold to mild climate country.  On its east side, a desert shifts abruptly into tundra.  As the tundra reaches into the center of the country, it turns into a barren wasteland.  Gandarst’s west side is dense forest.  The northern parts of the country are cooler than the south.  Rivers run through all of the terrain except for the desert and the tundra.  Within the wasteland, the rivers run underground, or at the bottom of a huge expanse of canyon, leaving the area above dry and infertile.

Gandarst’s ecology is sparse, and fighting between animals for food is common.

Humans, dwarves, orcs, minotaurs, rhinotaurs make up the most populous races of Gandarst.  The humans can be found within any terrain, while the other races are generally broken up by individual topography.

The dwarves can be found wherever there are mountains to be mined.  As such, it is thought that the dwarves outnumber any race within the country, though no action has been made to confirm that thought.

The orcs settled in the desert, and even have some tundra outposts.  Because of the desert’s proximity to many of the mountains of Gandarst, the orcs have found themselves in close diplomatic ties with the dwarves. 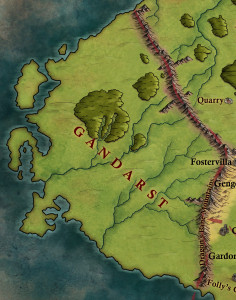 Gandarst’s humble beginnings featured a larger assortment of populous races than any other country on Raleigh.  Among the races it still shelters, Gandarst was also home to both werewolves and werebears.  All the countries lived in accord, but food was quickly becoming scarce.

War of the Mythic Beasts

The werewolves and werebears, in close proximity of each other in the northwestern region of the country, were the first to show aggression toward each other.  They were both hunting in the same places, and eventually, competition for food lead to hostility.  As more and more individuals on both sides died, the tactics of the races became violent.  War broke out between them, and their blood washed red the forests of northern Gandarst.

The nomadic humans eventually set their sights on the werewolves and werebears, whose wars were spreading them thin.  The barbarians thought that if they could eliminate the lycanthropes, they would be rewarded twofold.  First, they would open their range of hunting to more land.  In addition, any slain werewolves or werebears would provide ample amount of fur, which would protect the humans during the harsh winters.

When the humans attacked, the races were both driven out, though in different directions.  The werewolves were chased south, through the forests, and eventually east, across the mountains, into Daltain.  The werebears were immediately chased east, and some have said that they escaped into Blacklehn, though those accounts are unfounded.

With the lycanthropes pushed out of Gandarst, the barbarians ate well and found new land with which to stretch their legs.  But their zeal caused them to look outward, toward new victims.

The minotaurs and rhinotaurs were the prime opponents to next force from the country, as they were constantly vying for control in much the same way as the werewolves and werebears.  However, the humans also set their sights on the orcs, who were strong and unabated.  To counter their numbers, the humans looked to the dwarves, whom they greatly respected, due to their similar warrior nature.

The fervor of the humans was chaotic, leading them to engage with their new enemies before diplomatic ties had ever been made with their potential allies.  The dwarves never aided the human cause, and the barbarians had already spread themselves very thin.  The minotaurs and rhinotaurs fought to persevere, while the orcs decimated the humans, ruining all hopes of a human empire within Gandarst.

After many years of sharing the lands with the other races, the humans began striving for more once again.  Neighboring Blacklehn had been through much turmoil after the curse of their fallen leader, Roark, had swept the land.  In its weakened state, it became a prime location for expansion.

One of the human leaders, a might barbarian named Galen Fowler, lead an expedition to the country to the east, where he took it by force.  However, while Fowler made a home out of Blacklehn, Gandarst’s human involvement became weak.

Because the humans are outnumbered in Gandarst, they are actually the most endangered.  Gandarst is still regarded as a hostile human country, but many of the humans have had to change their way of thinking.  Even the nomadic history of Gandarst is steadily changing, the humans inhabiting much of the forest regions of the north.