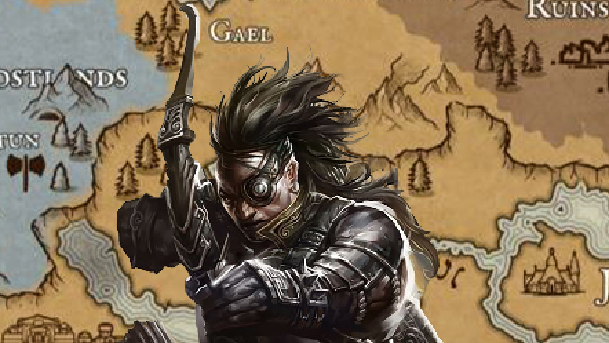 Greetings travelers, and welcome to one of our return trips into the Otherworld.  During the warmer months of this year, we ventured to Sarai, a world conceived by author Chad Westbrook.  Today, we venture there yet again, as we dive deeper into the Brightflame Saga.  Read on to learn more about The Frostlands.

In Chad Westbrook’s sophomore journey into his world of Sarai, he expands on the lore, the richness of the world, and of course, the story.  Indeed, in The Frostlands: Saga of the Brightflame: Book Two, we continue along with the orc, Aragrim, as he finds himself and his purpose, and his place not just among his people, but within the world.  Westbrook presents a story that introduces great new characters, along with greater stakes that truly help to bring a focus to Sarai, and to show you just what sort of dangers are present there.  Whereas the first book helped to weave the tapestry of the world, this sequel is like extra embroidery upon it, bringing an attractive set of details to an already exciting and attractive world. 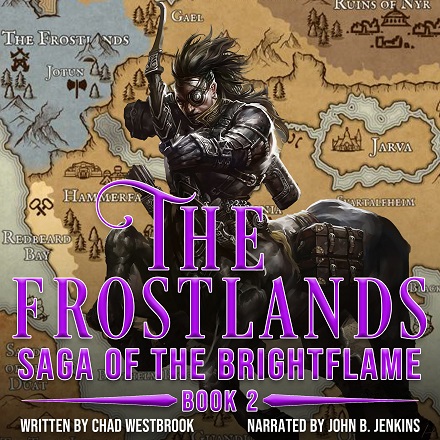 The battle with the dark elf Mak’ra is over. The world of Sarai is safe for now.

Aragrim sets off towards unknown lands with the other orcs to reclaim a home he knows nothing about.

Shortly after they arrive, the Stone Wolves clan is attacked by goat faced trolls. They meet a huntress who claims that the lands the orcs lost so long ago now belong to a witch named Cailleach.

Aragrim, Durgan, and the Stone Wolves clan join other clans of orcs in order to protect the frostlands but not everything is as it seems.

It’s up to Aragrim and a band of unlikely allies to face the witch, Cailleach, and save not just the frostlands, but the rest of the world from potential doom.

Written by Chad Westbrook, and brilliantly brought to life by the narrative talents of John B. Jenkins.

This second book also gives an opportunity for those who enjoy audiobooks.  Frostlands demonstrates an incredibly dynamic range for narrator John B. Jenkins, who flexes his own storytelling muscles even further in this follow-up.  It is beyond evident that Jenkins has passion for the world that Westbrook created, and he helps to bring out the rich details and character moments.  With the new characters on display, he has a varied palette of artistry to show off, and he captures the author’s voice to great effect.  These two talespinners synergize incredibly well, and bring a world to life that is worthy of a fantasy fan’s attention, especially if they want something that simultaneously feels like it leans on the traditions of fantasy while offering something fresh and exciting.  Check out The Frostlands: Saga of the Brightflame: Book 2 on Amazon today, and don’t forget to also pick up the incredible narrated version as well!