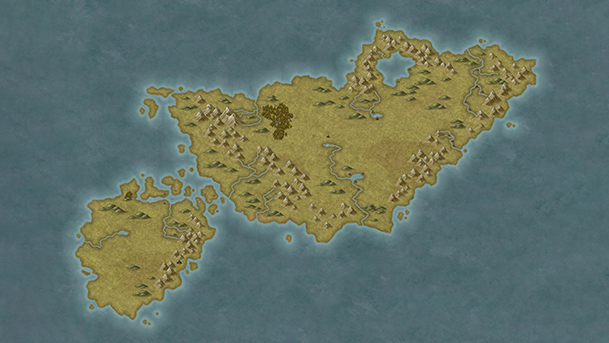 Greetings, travelers!  We’re back once again to take a peek at another of Tellest’s continents.  It’s been a while since I worked on one of these scheduled posts, so I apologize if I’m at all rusty!  But in any case, we’re going to be looking at Erenea, an interesting place that we haven’t spent too much time in yet, but that we’ll start to accustom ourselves to soon.

First off, let’s take a look at the kingdoms from the continent.  We begin on the left, with the darker orange color, which represents Runassa.  This small island is home to a variety of races, including dwarves, orcs, and trolls.  One of our characters from Quantum Quest is the lone resident that we know of from Erenea, and she hails from a city on Runassa, but we’ll show more about that in a minute.  Then, moving over to the right, we have Ganore, which has a mixture of a few of the fairer races, like elves and humans, and some orcs as well.  In yellow, we have Libra, which boasts the second largest freshwater lake in the world.  All sorts of races inhabit this kingdom, especially around that lake.  And finally, in the lighter orange zone, we have Auralia.  Again, it’s known mostly for the fairer races.

If you’d like to see the continent without the color overlay, you can see that here.

And then farther below, you can see two very brief sneak peeks at the behind the scenes content that you can only see embiggened when you’re a Tellest patron.  The first image is a version of Erenea that shows the one lone writer-ready character, Quirl Rockfist.  She’s one of the characters we introduced in Quantum Quest, though we’ve yet to see her used out side of it.  Then on the right, we have our city, which she belongs to.  Grim’s Hold is a troll city with an awesome sigil that we have a long way to wait for, as we’ve got so many other things lined up between now and then.  But suffice it to say, it’s a pretty cool sigil.

Erenea has yet to be truly graced by a Tellest writer’s presence, as we’re spending time in many other places at the moment.  But this continent will get its chance to shine, like so many others.  It’s just a matter of time!

We’ll be back with a look at another map soon after the New Year.  Stay tuned!