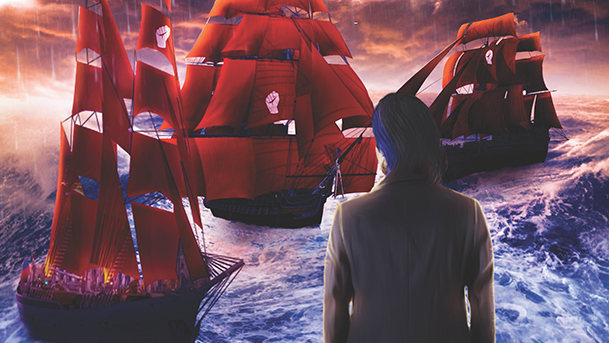 Howdy folks, and welcome to another Otherworld adventure!  Today we’re looking at a world that’s been conceptualized for a long while, and is now being given the chance to breathe on the page, and expand far and beyond.  Read on to learn more about Tempest: Epic of Faölan.

Author Nicholas Redmon has been dreaming of unleashing his fantasy on the world for years.  Thus, when Tempest: Epic of Faölan Book 1 released today, readers are set to witness the breadth of his craftsmanship.  Redmon writes with colorful, flowing prose that is rich and immersive.  Faölan is marked with excellent worldbuilding that comes from over a decade of preparation.  In Redmon’s world even the weather is fantastic and incredible.  And the characters are wonderful too.  It’s a tremendous coming-of-age fantasy that readers will love to sink their teeth into.  Along the way there are mysteries to be unveiled and unraveled, and majestic spectacle to enjoy. 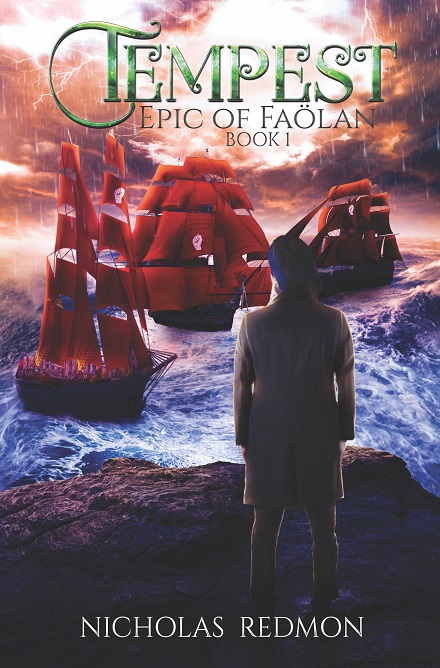 Enter Jarlith. Overlooking the sea, Jarlith spots an armada of foreign ships approaching the coast of his village. As soon as Jarlith sees the red sails on the ships, he knows who they are—the enemy. At that exact moment, the tempest begins. Lightning crackles, splitting the stormy skies overhead, as a deadly mix of rain and fire begin falling. Out on the rough seas, waves beat against the approaching enemy ships, but Jarlith understands that no natural force will stop the invading armada. It will be up to Jarlith to save his people. Realizing this compels Jarlith to enlist with the Jakurian guard and unite with an estranged kingdom across the lands of Faölan. Together, they will have a fighting chance of liberating the capital city of Jakuri from this invasion.

Hallis is a forest dweller, and feels a connection to all life around him. But when his best friend, Sapphire, is kidnapped by the invaders, he is forced to leave the solitary life he knew amongst his elfish folk, and venture forth to rescue her. The journey is rife with battles, tricksters, centaurs, giants, and other monsters that Hallis has never before encountered. Soon he is swept up with a roving band of centaurs who are relentless in their aim to re-establish solidarity between tribes and unify all of the species throughout Faölan.

The two stories intertwine and conclude in an epic tale of friendship, betrayal, and romance as Jarlith and Hallis come together to liberate the capital. This stand-alone novel is an action-packed fantasy, full of new creatures, magical abilities, warfare, and intrigue that will leave you wanting more and eager to dive into Book Two of the Epic of Faölan series.

As darkness descends across the coast, bringing a fleet of enemy ships, the fate of Faölan changes in a blink. One shy elf named Jarlith possesses the power to withstand the invading armada and save his people…he just doesn’t know it yet…

From the first page to the last, fans of the genre will be rapt by new revelations and well-written content.  Redmon is working on a great number of stories, explaining his craftsmanship in worldbuilding.  The first book in his coming-of-age fantasy series is just the beginning.  With promises to come, readers are in luck and set for more incredible happenings in a mystical land worth exploring to its fullest.  But while you wait for the inevitable sequels, it’s a great time to pick up the first in the series.  Check out Tempest: Epic of Faölan Book 1 on Amazon today!

One thought on “Fantasy Promo – Tempest: Epic of Faölan Book 1”