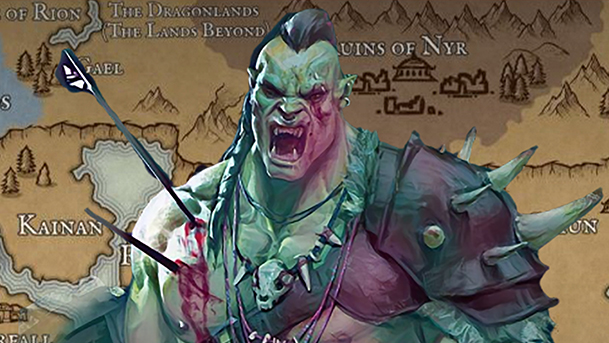 Greetings travelers, and welcome to our next foray into the Otherworld.  We’re doing a bit of a double-feature today, as our featured story comes to you in two parts, first as a book, and then again as an audiobook.  If you’re interested in learning more about a great traditional fantasy with some interesting twists, dive into Orc: Saga of the Brightflame.

While showing shades of gray around a character who would ordinarily be painted in less abstract colors is not new to fantasy, when it’s done right, it can be quite catching.  So it is in Chad Westbrook’s Orc: Saga of the Brightflame.  The book observes the treatment of one through the lens of his race and the color of his skin, though he’s found a different culture within the humans who have taken him in, even while some of them show reluctance in having done so.  Westbrook’s focus on Abrium–nee Aragrim–does not deter from other strengths found in the tale either, as a good deal of characters have backstories that weave an interesting tapestry about the world. 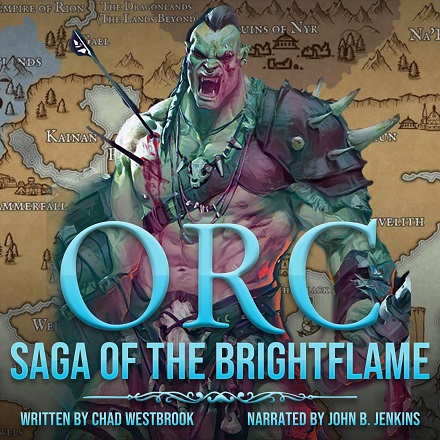 William Pyke, knight of Weithumbria, and his clan of warriors enter temple ruins to save a group of kidnapped humans from a band of orcs. What he did not expect to find were a female human slave and her half-orc child. Her dying wish was for the knight to protect her child, forcing Sir William to make the choice of taking the half-orc, half-human child back to Weithumbrian’s capital of Brythelm.

The orcling, now named Abrium, begins his years living in a town of people that abhor his kind. Trouble soon follows young Abrium and his father, William, is forced to send him away from the city to be fostered by the reluctant dwarves of Redbeard Bay.

And through it all, a dark elf witch seeks the souls of humans to free her evil dragonlord from his immortal prison and commands a disgruntled clan of orcs to get what she wants.

As talented a talespinner as Westbrook is, he’s found a partner in John B. Jenkins, who narrates the the story with a sense of grandeur, bravado and majesty.  He captures each character dynamically, so that the cast feels as though they’re represented by an entire ensemble.  Indeed, Jenkins brings a certain gravitas to the voice work that elevates the events and the dialog, making it sound as though Abrium’s adventures are told through a larger, more cinematic scope.  Together, these two storytellers have done a wonderful job of telling an orc’s very interesting story, and it’s one that you should certainly look into.  Check out Orc: Saga of the Brightflame: The Complete Saga on Amazon today, and don’t forget to also pick up the incredible narrated version as well!

One thought on “Fantasy Promo – Orc: Saga of the Brightflame: The Complete Saga”