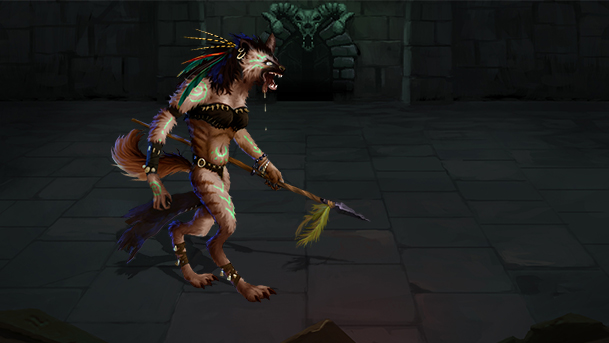 Hey there!  I’m back with a new look at some old characters, who have had a bit of a glow up.  These are the last five adventurers who join us in the dungeon for now, but we’ll see what happens going forward.

So, it’s just by happenstance, but our next two characters have both featured in a short story for the Tellest universe, written by Aaron Canton.  Noth Vox, the Rhinotaur crusader below, is on the lookout for unholy things wherever he can find it.  While in his story he’s hunting the undead, the living dungeon need a good cleansing too.  Now that we’ve been introduced to Noth, there’s a good chance we’ll see him again at some point.

The other role in the story went to Rayas Vhirr, a crazed gnoll who is just having a bad run of luck no matter what version of her we’re looking at.  In Blood in the Desert, she’s overcome by the fear of the undead that surround her.  But in Quantum Quest, she’s locked away in another world, just about, with no easy way home.  I can just imagine what that would do to someone’s mind!  She’s an interesting enough character that we’ll likely see her again in the future as well.

Merris Daith has no story to have claimed her yet, but she’s got some connective tissue with two of our other gremlins, including one who showed up in a feature-length Tellest novel.  Merron, her cousin, ended up helping out our heroes in Heart of the Forest, even though he started out as a bit of an adversary.  Merris also has a friendly rivalry with Cravat Keeno, one of our sort of flagship characters from the Quantum Quest Kickstarter video, and upcoming novelization.  It won’t be long before she gets her own chance to shine, especially as we explore more of Draconis, and see places like The Undermire.

Our next gremlin is a hideous fellow, even by his race’s standard.  Perhaps that’s why he hasn’t met any of the other gremlins we know yet.  Kor Laros makes up for his unseemly visage with his willingness to make everything else ugly as well.  He usually does this by setting it all on fire.  He wouldn’t have necessarily been off looking for the living dungeon, but now that he’s happened upon it, he’s certainly not going to try to leave it the same way as he found it.

Rounding out our group today, we have our kaja sorcerer, Jagsis Hauth.  Jagsis is a spellcaster who was given his power by the orb that he keeps in his possession.  He’s from the same part of the world as our Dragonspeaker, Kaiyonani, although they are on opposite sides of the Kehara Desert.  Still, that’s close enough where we might see them interact in the future.  Jagsis unfortunately, despite all his newfound powers, isn’t liked by his peers, in part because of the fact that he has those powers, and didn’t before.  That kind of wears on someone, so we’ll see what becomes of him, if he can ever return from the living dungeon!

Well, that about wraps us up for our adventurers in Merge Dungeon for quite a while.  That’s not to say we’re done yet.  There’s still more Merge Dungeon goodness to share, but it’ll be a short while, and we’re going to be pivoting to something a bit different.  Keep your eyes open though.  It won’t be long!