Greetings fantasy fans, and welcome to a spectacular new visit to the Otherworld, which you aren’t soon to forget.  Today, we might just be introducing you to your new favorite author, and one with an impressive back catalog that you’ll love to dive into.  But for now, let’s start at square one of one of their sagas.  Read on to learn more about Knightmare Arcanist.

If you don’t yet know author Shami Stovall, you were likely to do so even before reading this promo.  She’s got a tremendous catalog, and many a great series, including an incredible fantasy saga you won’t want to miss.  Knightmare Arcanist (Frith Chronicles Book 1) starts things off.  In it, you’ll find relatable characters, who are very enjoyable to spend your time with.  Their  interactions feel real and rich, helped by the history that lies as the foundation there.  You’re not just thrown into a story that’s finding its feet, but living in a world that is deep and well-founded.  Stovall’s tale subverts expectations in satisfying ways, and builds on mythology and legends of old.  And possibly one of the most catching parts of the story is Stovall’s captivating magic system, which sees arcanists bonding with eldrin: magical creatures that bestow enchanting gifts. 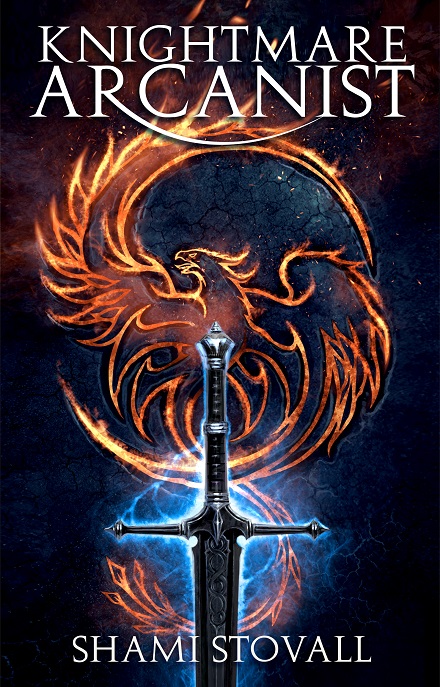 WINNER of the B.R.A.G. Medallion for Fantasy!

WINNER of the New Apple Literary Award for Fantasy!

“Knightmare Arcanist by Shami Stovall was rollicking good fun! Perfect for those who enjoy the Codex Alera series, the Homas Wildus series and the Harry Potter series. Stovall is quickly becoming a name I look for.” – Seattle Book Review

Magic. Sailing. A murderer among heroes.

Gravedigger Volke Savan wants nothing more than to be like his hero, the legendary magical swashbuckler, Gregory Ruma. First he needs to become an arcanist, someone capable of wielding magic, which requires bonding with a mythical creature. And he’ll take anything—a pegasus, a griffin, a ravenous hydra—maybe even a leviathan, like Ruma.

So when Volke stumbles across a knightmare, a creature made of shadow and terror, he has no reservations. But the knightmare knows a terrible secret: Ruma is a murderer out to spread corrupted magic throughout their island nation. He’s already killed a population of phoenixes and he intends to kill even more.

In order to protect his home, his adopted sister, and the girl he admires from afar, Volke will need to confront his hero, the Master Arcanist Gregory Ruma.

A fast-paced fantasy with magical creatures for those who enjoy the Furies of Calderon (Codex Alera series) by Jim Butcher, Unsouled (Cradle Series) by Will Wight, and Percy Jackson and the Olympians by Rick Riordan.

Readers will find that Knightmare Arcanist flies by, but it also flows smoothly, with great, easy to follow fight scenes, and well-paced story beats.  It takes place in an awesome world that is just begging to be explored further.  Stovall gives monsters and mystical creatures their chance to shine in ways that make them feel like more than just moving set pieces, and with each new book in the series, it’s that much more exciting to head back and spend time amongst that magic.  Next week the seventh book in the series will arrive, so readers have a huge world that they can dive into at their fingertips.  But it all starts here, with book one, which sets the stage for so much more.  Check out Knightmare Arcanist (Frith Chronicles Book 1) on Amazon today!