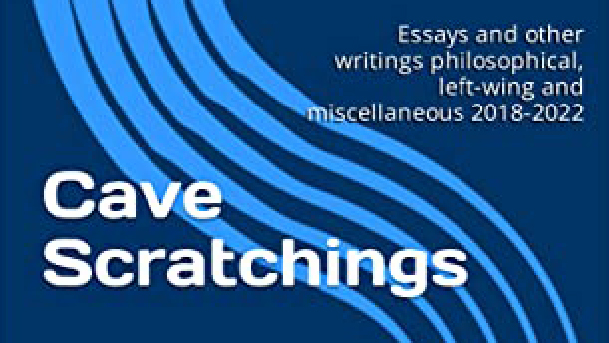 Howdy folks, and welcome to one of the weirder stops we’ve made in the Otherworld in recent times: the real world.  Today, we’re taking a look at someone whose work is tangentially adjacent to what we talk about on Tellest.  There’s a bit of fantasy, and a bit of sci-fi between the covers of this massive non-fiction book, and I’m of the mind that if someone has something to talk about that’s near either of those genres (or horror), we give them the platform to stand atop.  Read on to learn more about Cave Scratchings.

Author Philosophy Bear has recently released his first book, Cave Scratchings: Essays and other writings philosophical, left-wing and miscellaneous 2018-2022.  In a lot of ways, these essays could be considered musings.  There’s nothing definitive about where we’re going, though Philosophy Bear does a wonderful job at exploring where we have been, and using that data to try and scope out where we might go once we extrapolate based on that information.  The author takes readers on several different journeys with a scope and vision that not a lot of people get to experience. 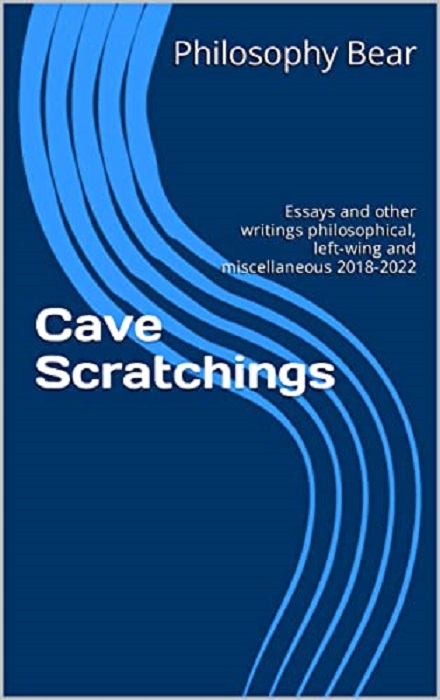 A strange collection of essays and other writings by Philosophy Bear, one of a small handful of grizzly bear writers in the world today [and do you know how few grizzly bears fit in a handful?]. A professional graduate student, lifelong OCD sufferer, longtime leftwing activist, and a passionate salmon connoisseur, Philosophy Bear scratched these essays into his cave walls while he should have been hibernating.

This anthology covers topics from socialism to folk music, from OCD to metaphysics, and from Oscar Wilde to AI. Its tone and quality vary from cascading sorrow to dam breaching hope, from white-knuckled rage to cold and rapid analysis, belles lettres to bawdy humor, well researched and circumspect writing to wild and irresponsible speculation. It’s long and cheap so we can at least promise that it’s good value in a narrow and quantitative sense.

Readers should be warned in a number of respects before purchasing this book:

1. It was written by a busy graduate student. It’s a labor of love, but a rough one. By my fermi-estimate, it contains 35 spelling mistakes. The fact-checking isn’t always up to the standard I’d like. I’ve tried hard, but there will be problems with the layout.
2. If the cost is too much (I’m not judging, I know what it’s like to be completely broke with not even a dollar to my name) you can get a free PDF version by Googling “Philosophy Bear Substack” and looking at the pinned post.
3. It’s very left-wing. If that annoys you, you have been warned.

The observations that Philosophy Bear compiles here are varied, and while they may not all be of interest to everyone, they are each scholarly and, yes, philosophical.  There is a lot of thought that went into these…well…thoughts, and it is interesting to delve into the mind of someone so completely.  If you want to go down the rabbit hole of someone else’s psyche, this may be just the book for you.  Check out Cave Scratchings: Essays and other writings philosophical, left-wing and miscellaneous 2018-2022 on Amazon today!

Please note: this author pulls no punches, and says things that, at some points, may intentionally offend. While Tellest appreciates free speech and openness, it does not necessarily share the same opinions.  As this is a philosophical book, it was decided to allow it a place on this platform.

One thought on “Fantasy Promo – Cave Scratchings: Essays and other writings philosophical”