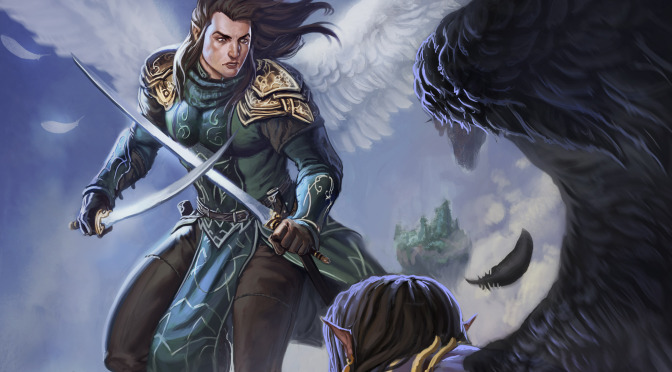 Elves are believed to be the first prime race that was put on Tellest by the gods.  Supposedly, they were formed from the trees that scattered the planet, which is why they can usually be found around forests.  Besides heavily mountainous regions, elves were known to originate from anywhere with an abundance of fauna.

Elves look incredibly similar to humans, though they have the capacity to often be fairer skinned, taller and more slender than humans.  The biggest difference between humans and elves are the shape of their ears.  While the tops of the human ear curs over, an elf’s extends to a point.  This is supposedly to aid their sense of hearing.

Elves are also known to look slightly more youthful than humans.  This is in part because of the lack of facial hair that the race is usually attuned to.  That is not to say that the elves cannot grow facial hair.  It is a choice made in part because they believe it helps them commune with nature better.  An elf’s skin is also known to be more delicate than a human’s. 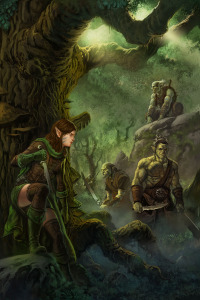 Through their everyday lives, elves will mostly wear only cloth.  Occasionally an elf will also wear leather padded clothing.

In battle, elves will sometimes wear chainmail.  It is exceedingly rare for an elf to wear a plate mail, and, if they do, it is usually made of mythril, allowing it to sit lightly on their bodies.

Elves treasure stealth and tactical mastery, and metal often restricts some of that ability.  As such, the quieter armors are largely trusted.

Elves do not have a rule against body piercing, though it is uncommon.  If piercing is apparent, it is usually only on the ears.

Tattoos are far against the culture of the elf.  In fact, the only times tattoos are used are in the form of branding.  The elves believe that their sins must never be forgotten, and tattoos are a sign to all of what they have done.

Elves and humans seem to be cut from the same cloth.  There is not a wide variety of difference that separates them.  Their personality and culture are perhaps the biggest differences that stand between the two races.

Elves are very worldly.  Due to their length of time walking the lands of Tellest, they appear very wise, and very intelligent.  Sometimes, this can come off as snide, but, in truth, they speak to everyone in this manner, including each other.  They often choose to approach a task with their minds, rather than through hard labor.  However, this is not to say that they back down from their decisions easily.  Like dwarves, elves are incredibly stubborn.  Unlike their small allies, they usually have many reasons why they are right.  Also, unlike dwarves, elves are very rarely known to apologize for their mistakes.

Of all the races of Tellest, elves are the most autonomous.  Though they ally with the other goodly races that surround them, it is not out of necessity.  They can carry on well enough alone, leading some to wonder why they have extended their hand to the others at all.

Elves live much longer than any other race on Tellest.  It is with this knowledge that relationships, while treasured on a deep emotional and personal level, are not as hallowed as those couplings by humans or dwarves.  This is in part due to the fact that elves determine significant others largely by the way two individuals complement each other.

One of the other basic differences between elves and other races is that it is not entirely rare for an elf to take several different lovers over the course of their life.  Sometimes this is due to the result of an untimely death, but sometimes it is just because as the individuals grow, their needs change.  It is not looked at, culturally, as a wrong thing to do when a companionship like that dissipates.

Elves live long enough to see several generations of offspring.  They stay close to their families, often occupying the same place for their entire life.

Though the elves are said to live for as many as a thousand years, they do not procreate as often as any other race on the planet.  Rather, it is almost as if their life begins anew when a child is born, and they start over.  No one knows for sure why the elves proceed that way, and the elves have never divulged that information willingly.

Elves live in grand cities, most made about the boughs of trees.  Their numbers abound, familial ties never taking individuals too far from where they were raised.

Because of the long lifespan of elves, many of them have a good deal of training in several trades.  Being proficient in multiple occupations allows them to easily shift production towards whatever is most necessary for them when they need it.  Because of that, the elves are known to be one of the most industrious races, even if they are only developing creatively.

Elves are very distant from all other races.  As a society, they are not looked at fondly when mingling with humans, dwarves or even gnomes.  The more tribal natures of the orcs and minotaurs are tolerated at greater depths, and if the kaja were not so skittish, they, too, would probably be given more respect.

This is not to say that elves are not friendly with the other races.  Besides being allied with them, the elves will come to aid any of the goodly races of Tellest.  There have also been countless instances where individual elves have gone against the grain, and openly expressed companionship with other races.

Elves are fluent in common and elvish.  They are also very knowledgeable in any of the other races they have come across throughout the years, their long lifespan aiding them in their search for knowledge.

Elves are able to write in elvish, as well as any of the other more popular languages.  They do not usually prefer writing as their primary means of lorekeeping.  This is largely in part to the fact that they live long enough to pass down important information aurally.

Elves, despite many having had personal encounters with the gods of Tellest, do not worship anything.  This has led to some of the other races fearing the elves, waiting for the wrath of the gods to fall upon them. 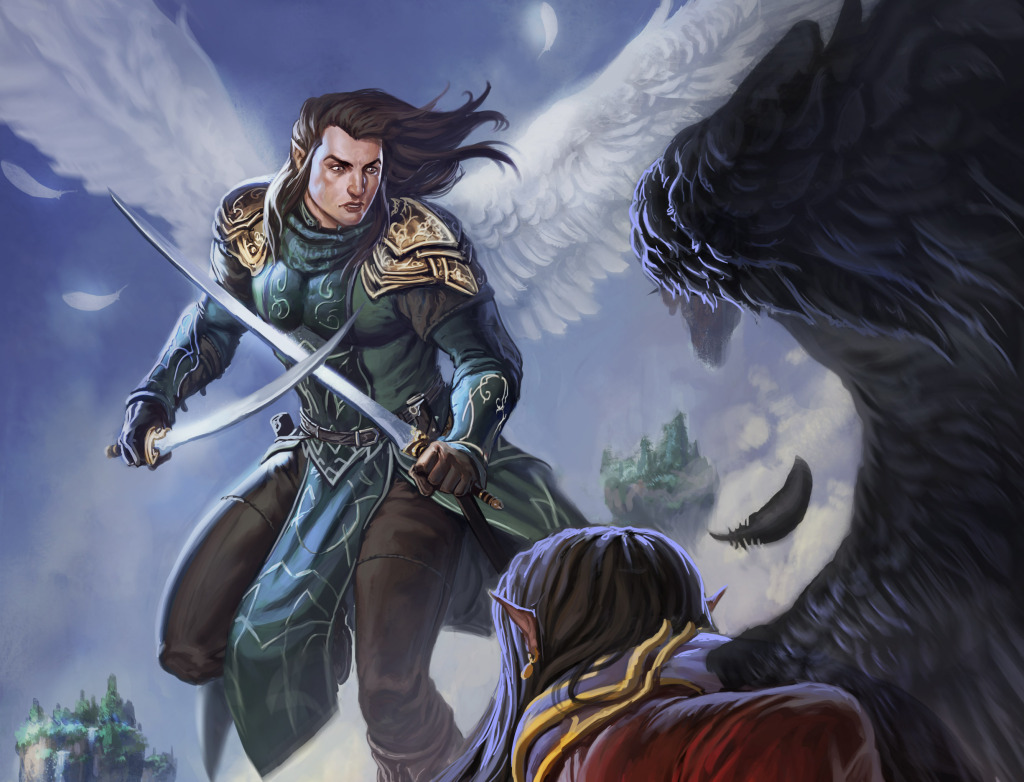 The elves were the first prime race that the gods created.  They inhabited the surface world of Tellest for a great while before the humans showed up as well.  While dwarves were the second prime race, the elves only became conscious of their existence when they finally emerged from the caves and mountains of the world.

The elves supposedly speak to nature.  With this in mind, they are able to record much of their lore through inanimate life.  Elves supposedly favor the great synoak trees for this endeavor, since those trees are known to outlast all manner of life on Tellest, including the elves.  It is said that the synoak trees have a recollection of all of the elves adventures and personal successes, but also keep deep seeded knowledge of their confessions, failings and sins.

The elves of Tellest look upon modernized technology with scorn.  Most technology requires the death of nature, something the elves despise greatly.  Rather, they embrace nature, bending it instead of breaking it so that both may find some use from each other.

Elves utilize nature as its primary source of technology.  While humans would carve a canal in the ground and line it with stone, elves will find a way to have nature perform the task for them.

Elves are affluent users of nearly all kinds of magic.

Because the elves have grown from nearly all the places of Tellest, different sects of the race have evolved into different kinds of magic.  The four basic schools of magic are embraced, though not so much as the more nature enriched druidic, shamanistic or geomantic magics.

Holy magics are a rarity, but they do occur.  Most of the elves, though not all of them, refuse to believe in gods, in singularity or many.  There are some interspersed sects of elves, however, that have a more personal relationship with their faith.  It is these uncommon few who have ventured forward to be priests or paladins for their cause.

Of the types of magic that elves generally stray from, dark and destructive magic are the apexes.  Magic was, to the elves, intended to help create, not to destroy.  Furthermore, everything is meant to have its place.  Resurrecting the dead or summoning evil beings to perform services for a caster is strictly taboo.

It is very rare for elves to venture into combat in anything but small numbers.  Instead, their prowess is shown through their intelligence and well planned tactics.  The elves are known to ambush their enemies from higher ground, generally from the hidden boughs of trees.

Elves make their weapons and tools out of aged wood.  The materials are blessed, the spirits of nature willed back to the earth.  Elves also use metal edged weapons, especially mythril.

The race prefers to use long ranged weapons, with bows being at the forefront.  Throwing knives, as well as glaives and chakrams also find their place during battle.

As it pertains to melee, elves find themselves most at home with staves and light spears.  They are also known to carry swords.  It is very rare to find an elf carrying a heavy axe or mace.

Elves are also supposedly the race responsible for perfecting the ballista.  It is said that their war machine fires the fastest, farthest, most dangerous ammunition that Tellest has ever seen.

Elves are very rare to see wars.  While they are perhaps the most powerful race on the planet, due to their excessive numbers and potent magical ability, they will fall back from most battles on a whim.  Elves have even been known to abandon their homes at the slightest sight of danger from an opposing army.  However, because they are so reclusive and opposed to warring, most enemies tend to leave them where they are.

While the elves have no true enemies, it is also fair to say that they have no real friends.  On an individualistic level, elves have made allies and companions out of nearly any race on Tellest.  But as a society, they feel better off left alone.