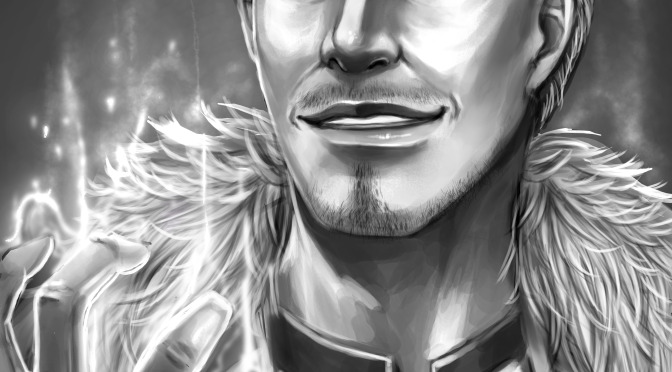 You can’t have a nice little art gallery on Tellest without featuring some of the bad guys.  We’ve seen glimpses of them on covers, and RedPear has done an excellent job with Schirner, but even he is secondary to the murderous necromancer, Juramentado.

While he is portrayed as a devious monster in The Bindings of Fate, it wasn’t as if he was born to be evil.  I don’t believe in things like that – in humanity anyway.  You’re the product of a lot of different things, and while a moral compass might be broken from the start, there’s usually some other components of your life that lead you in the wrong direction.

So, like her earlier work on Schirner, RedPear gives us a version of Juramentado that has a little more humanity. 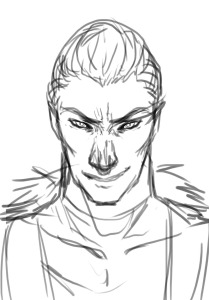 This one struck me a bit like he could have been a baddie in a Street Fighter game.  Akumamentado, perhaps.  But our necromancer isn’t as fierce looking as this chap.  Nefarious, yes, but Juramentado is a more like a weak-bodied, middle-aged wizard than a fighter with a broad body and a bad streak.

We moved in the right direction with this sketch.  Juramentado was a little more mischievous looking here, and began looking the part of your favorite supervillain. 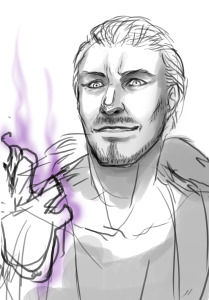 And of course, what better way to give him some extra character than to give him the evil mustache and goatee.  Now he just screams that throaty “mwahahahaha” we all know and love. 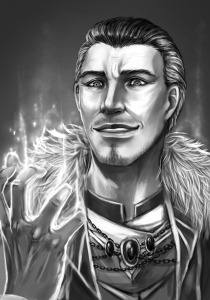 Look at that!  This is one of RedPear’s most impressive works to date, and I could not be happier with it.  She captures the eerie power of this character, and she does it in a way that makes him seem as though he could have been good.  It makes me want to lean on the way Marvel does things from time to time, and write some alternate reality pieces where Juramentado fought for the side of the heroes.

And as always, you can’t truly appreciate the work that she does without seeing that extra little splash of color.  Her work already has so much personality, but with that extra pop…

Juramentado was done very well, and I can’t wait to show you some of the other work we’ve done throughout these past several weeks!