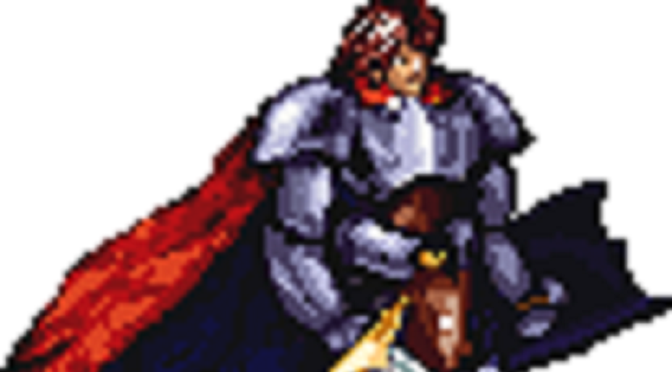 It has been quite some time since we’ve had a proper sprite anywhere on this site, and that’s far too long.  While I can’t tell you—yet—why we had these commissioned, I can give you some sneak peeks at a project that’s brewing behind the scenes.  Over the next several months, we’ll give you a few glances at the project as it comes together, maybe a few clues as to what it is, and then we hope to get you involved in a big, big way!

Our first hero that we’ll be showing you is a man named Benton Kearst.  He’s been a character that’s shown up a lot behind the scenes of various Tellest projects, but he’s never seen the light of day.  That changes today.

Alright, that’s not much to look at, but our artist, Chris (who you might remember from his work on the shelved project, Heart of the Forest), was just putting things together.

Benton is a man who has joined the Knights of Gardone in western Daltain.  He’s a noble fighter, and a resilient foe on the field of battle.  His allies would consider him very reliable, but in the case of this game and this story, he’s on his own.

There’s more to Benton than meets the eye, however.  He, his brother, and his sister all have an interesting origin story, though it might be a while before you see that.

Growing up in Tellest is tricky business for anyone, but for a stranger in a strange land, it can be even more oppressive and dangerous.  Benton spent a good part of his formative years trying to track down his two siblings, but again… that’s a story for another time.

Instead, let’s focus on the story at hand.  Chris put together a nice version of Benton that was informed by the work that we did on Heart of the Forest so many months (years?) ago.  We determined that we wanted to use Heart of the Forest as a kind of base of operations.  That is to say, if we make more games and properties in the future, it’ll work to our benefit to tell stories that utilize the same level of graphics and feeling across the board.

Who knows?  At some point, we might even see our ranger and this knight interacting together.  These next few changes are very, very subtle, but all that time was spent establishing the sprite as the very best it could be.

We joked about how many iterations this sprite had.  At one point, he had a pretty big honker.  At other points, he looked like a buff knight with the head of one of the Canadians from South Park.

This final piece showed Benton in all his glory.  He’s ready to headline his own game, don’t you think?  Well, maybe he won’t have to.  And just so you get a better idea of what the old boy looks like, here is a better look at him. 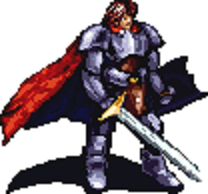 We look forward to bringing you more from this mystery project in the weeks and months to come.  Stay tuned!