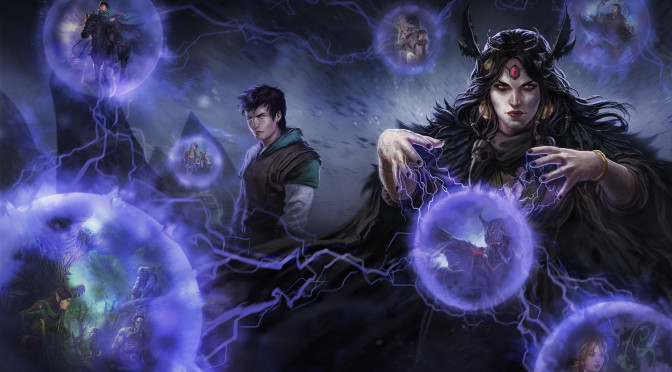 Once again, I want to thank everyone for their support of Tellest as we draw to close the first phase of our stories.  It was with all of you that we went on this journey, and I’m excited about taking the next steps.  Be on the lookout for more stories, art and other projects in the weeks to come.  Thank you so much!

Keeper of the Void

A Story by Michael DeAngelo

Before his eyes, the orb grew dark, his reflection peering back at him.  He did not realize it, but a great influx of mist had entered the void.  He shook his head, freeing himself of the trance that held his attention to the orbs.

“You see now what you are needed for?” Nyrshia asked.

Rhys turned and glared at the keeper of the void.  “No, not really.  Nothing I saw looked out of the ordinary in the slightest.”

“How could I set things right?  I’ve never seen any of those people in my life.”

Vedas shook his head while Nyrshia seemed to float away in the mist.  “You still don’t understand, do you?  Time is not some arrow shot forth to meet an end.  It is a series of waves on a distant shore, cascading against rocks, sending ripples through the ocean.  You are merely a ripple, Rhys, neither here nor there.  You’ve rescued these people from a break in the timeline, yet you’ve never strayed from your own.”

“You told me to witness the events in the orb, and so I have.  Give me the mirror, and let me be on my way.”

A smirk was all Rhys could see as Nyrshia disappeared into the mist.  “Very well.  Give him what he seeks, Vedas.”

While the keeper of the void disappeared into the miasma from whence she came, Vedas stepped forward.  He tossed the item to Rhys, watching as the human sprung forth to catch it.

“You know the power that thing holds, don’t you?” the cobalt-hued warrior asked.

“At the cost of your soul, perhaps.”

“Let me worry about my soul.”

As he said the words, though, the orb beside him transitioned once more.  He saw the woman inside, her smile so disarming he almost dropped the mirror.  Vedas caught that surprise, arching his eyebrow.

“You know, you should never steal something from a thief,” Rhys mentioned.

“Because they’ll steal something back.”

Before he had the opportunity to reflect on that comment—that threat—Vedas could feel his feet leaving the ground.  Rhys was already in motion, grabbing the orb beside him and holding it close to his chest.  He took several bounding steps while Vedas floated in the air.

“Your tricks will not work for long, boy!” Vedas cried.  “When I find you, I’ll rip out your insides and feast on your bones!”

As Rhys drew farther away, he snapped his fingers.  Vedas plummeted from the air, landing in a heap.  Mist scattered about, and when he rose to his feet, the human was gone.

Rhys inhaled a deep breath, straining through the miasma of the void.  With every long, quick stride, he could feel his lungs burning in his chest.  He couldn’t stop running, though.  Vedas’ words may very well have been true—perhaps his kind enjoyed the taste of human flesh.

Throughout his ceaseless race, Rhys could not find the exit.  Without any observable landmarks, there wasn’t even a sure way to know he had kept to the same direction.  Wary he may have been running right back to Vedas, he gripped the mirror and the sphere tighter.

“You know not what you do,” Nyrshia’s voice echoed out among the void.  It was almost as if it was rising from the ground beneath every one of the thief’s footfalls.  “Return the orb to us and all will be forgiven.”

Though her words sent a shiver up his spine, Rhys noted the concern in her tone.  The orb could be stolen—she was fearful of that.  Almost as soon as he considered that, he could see a swirling vortex in the distance: the exit.

“No matter what happens, you can’t bring her back,” Nyrshia insisted.  “It is a fixed point in time.  She was meant to be lost.”

That insight cascaded over him like a raging waterfall.  His pace waned for a moment, and he reflected on that idea.  His brow furled, and he resumed his hasty sprint, blood pumping furiously through his veins.

When he arrived at the portal, he could feel the perspiration soaking through his tunic.  A few labored breaths were all he allowed himself before he lifted the orb, peering at its contents.  Sure enough, it was the familiar woman again, peering back out at him as though she knew she was being watched.

One last burning breath was all he was afforded before he flung himself into the portal.  He wasn’t instantly faced with the lush countryside he had come from, though.  A tangible darkness swirled all around him, oppressive and filled with an unfamiliar energy.

A resounding crack echoed in that small area.  He lifted the mirror and saw his reflection, still unmarred.  Another crack roared out in that pocket of swirling energy, and he drew back, gazing at his other pilfered item.

The orb no longer displayed a single uniform image.  Dozens of events and places were shown across its cracked surface, and as it continued to lose its integrity, still more images appeared.

As though a powerful gust of wind had buffeted him, he was knocked aside.  Rhys watched while the orb rose in the air, luminescing between each of its many cracks.  The vortex, that little pocket of the void that he had entered, filled with that same bright light.  Silence entered the place—not the absence of sound, but the complete destruction of it, Rhys realized.  For as the orb continued to deteriorate, he could feel himself pulled toward it.  That painful tug had him screaming, but no sound emerged from his lips.  A shard of mirrored glass flew toward the floating sphere, and it took all his effort to turn the mirror about.

Fragments of glass remained, enough to see he was being stretched and torn in much the same manner.

The pain and the fear became too much to bear.  Rhys ceased fighting against that ominous pull and waited for the inevitable end.  Before his eyes, the orb exploded outward.  Hundreds of shards, many infinitesimally small, others large and vibrant, stopped in the air, locked in place.  He saw his outstretched hand and realized he, too, was unable to move.

The roaring of air preceded anything else, but the blinding radiance was quick to follow.  At once, those shards—of the orb and the mirror—drew inward, along with the man who dared to interfere with time.  In mere seconds, all those fragments collided and disappeared within the central point of the portal, where the orb had been suspended.  The portal, too, closed and faded.

All was quiet in the void, the displaced miasma settling once more.  Muted footsteps made their way toward where the vortex had been.  Vedas crossed his arms over his chest and scowled at the emptiness of the place.  He sensed the arrival of another  and pivoted back to the keeper of the void.

“He took the bait,” Vedas said.

“We knew he would,” Nyrshia replied.  “He is a part of time’s grand tapestry now.  Let’s hope he is good with a needle and thread.”

Vedas couldn’t bring himself to offer up even a polite grin.  Another orb swept by him, and he peered at its contents.  Sure enough, he knew the inhabitant.

Rhys climbed to his feet in a foreign time and place.  The mirror was shattered, though the frame was whole.  And beside him, a single fragment of the orb remained.

The keeper of the void was already shaking her head.  “It continues.”