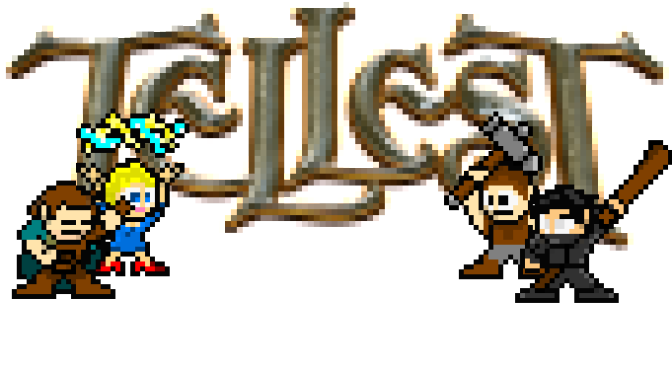 We’re rounding out the Tellest Pixels feature here on the site today. Over the past few weeks, we showed you what would have happened should we have succeeded with that initial Kickstarter – we were going to give out awesome little 8-bit inspired buttons.  We also showed you a second set more recently.

So far, we’ve seen the oldest heroes of the book series (Kaos, Dirk and Steel Tip), and we’ve traveled to Atalatha to see their champions (Alicia, Zachariah and David).  Today, we’re rounding out the biggest heroes from the second half of The Bindings of Fate.

Here, you can see the characters that we were introduced to once Westwick was discovered in the book series.  Christopher and Holklund were specifically found in that town, while Kaos and his companions happened upon Anson and Adelia on their way to stop Blacklehn from destroying Atalatha.  They’re all featured from top to bottom in the order they appeared in the book.

There’s a couple of interesting things to note here, too.  I made two versions of Holklund – one with pupils, and one without, to denote his power to see through other people’s eyes.  Anson is the only character besides Dirk not to be presented without a weapon or a spell.  And Adelia took me 16 different tries before I was finally happy with the version of her I ended up with.

So, that’s it for Tellest Pixels.  It was a fun little side project, but I mostly wanted to focus on the young heroes of the stories.  That isn’t to say there aren’t more that we could do.  You’ve got the Knights of Virtue, the antagonists, and everything from the rest of trilogy and the series to follow.  If I get a lot of positive feedback on these, perhaps I’ll consider adding more to the list!