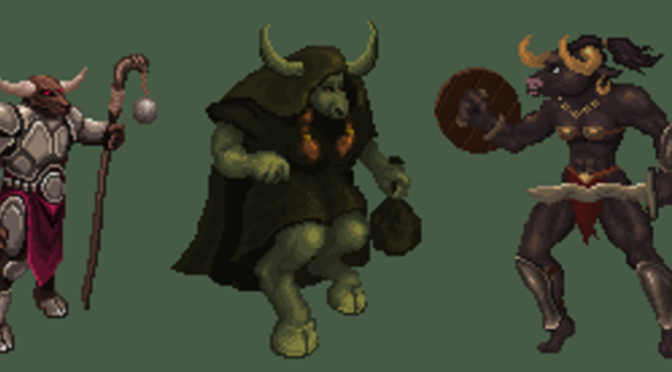 Representing from pixel land, people.  It’s time to flip the script again and… well first off, stop talking like that I suppose.  But anyway, we’re looking once again at the races in our card game, and it’s time to show off another set of good guys.  Next up?  The minotaurs.

We haven’t really seen any of these folks in the book series yet, though one does appear in statue form on the cover of the upcoming novel, Arise.  Just because the main characters haven’t reached them yet in any of their stories, that doesn’t mean they’re not important to the overall fit of the world!  And to prove it to you, check out our heroes from our card game:

Again, a lot of diversity here, like a lot of the other anthropomorphic races.  Let’s learn more about them, shall we? 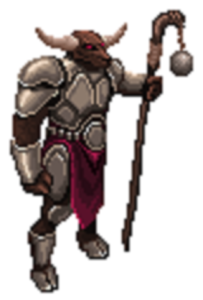 Krull is a mage from the capital city of Caledos in Daltain, which is open to many of the goodly races.  At first glance, he seems like a tough customer.  All that armor and a weapon that looks optimal for dishing out the hurt makes him look more like a warrior. Despite that, though, he’s pretty squishy.

You ever heard of a bull in a china shop?  Well Letti Lonvo definitely has the propensity to fulfill that idiom—if she weren’t a girl, that is. Yep, some of the minotaur on Tellest grow horns regardless of their gender.  She’s pretty tough too, able to endure a lot of damage before she would give in to the pain. 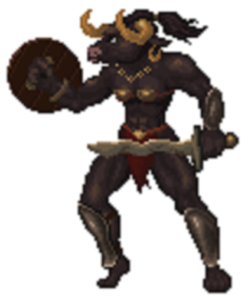 Finally, there’s Tarsa Paith.  Tall, vicious Tarsa is not someone you want to mess with.  She hails from the city of Asteria, where gladiator fights are a daily occurrence, and she’s one of their more renowned champions.  She doesn’t fight for glory, however.  No—money is more her style.  And she’s heard rumors that the dungeon that mysteriously appeared near the city has some glorious treasure in its depths.

And here you see all our minotaur heroes all at once.  We’re down to the last few races of this game, and then we’ll be turning around to show off some new components of it!  Stay tuned!