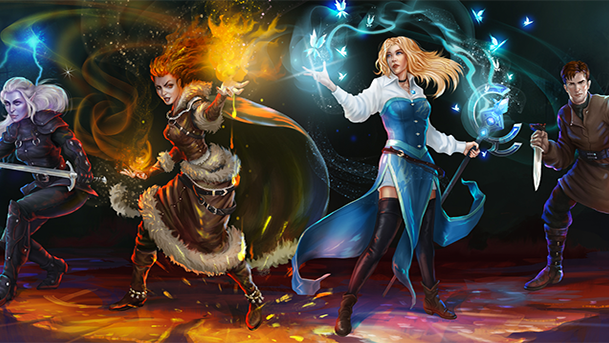 Howdy folks.  I’ve got a cool treat for you today, as it involves not just Tellest, but the works of a few fantasy worldbuilders.  A while back, I worked with each of the three creators of a few fantasy universes: Eric Barnum, whom we’d collaborated with before in Quantum Quest, Valena D’Angelis, who has written some Tellest tales for us, and J. Steven Lamperti, who has seen his Liamec books here on Tellest quite a few times.  We decided to pool our talents and headline the Persistent Fantasy Worldbuilder group, letting some of our most popular characters lead the way.

Below, you’ll see the first few sketches that we had Sergei work up for us.

He gave us a lot of options, but we ended up going for the one you’ll see below, which saw magic and effects practically pop off the screen.  Our four characters, Adelia, Dar Tania, Ahna, and Twee, represent some headlining characters from our distinct universes, but they also show up together here in a way that says that you can create such majesty by expanding your mind and your fantasy tapestry.

Here you can see just a bit more magic and tweaks to the formula to make it pop even more.  Side note: I love the juxtaposition of Adelia and Dar Tania side by side like that.  Watching fire and ice work together like that is so cool!

Each of us has spent time creating incredible worlds, and Sergei helped us bring this image to life in a spectacular way.  And this was just the tip of the iceberg, as we’ve expanded on the Persistent Fantasy Worldbuilders group somewhat considerably since its inception.  We team up on projects, offer insights on what works for us and what doesn’t, and more.  I’m looking forward to even more opportunities to collaborate with these tremendous people in the future, and can’t wait to show off new collaborations to follow!