Greetings travelers and welcome to a very special trip into the Otherworld today.  It’s not often that we have what I would describe as a golden opportunity to talk about one of the classics of speculative fiction, but in this case, we’re afforded just that.  Whether you’re keenly aware of it, or have only heard the title in passing, no one can deny the great cultural impact of L. Ron Hubbard’s Battlefield Earth.

One of the most loved pulp sci-fi books of the past century, L. Ron Hubbard’s Battlefield Earth: A Saga of the Year 3000, celebrates its fortieth birthday this year.  It’s popcorn sci-fi that gets its hooks in readers, and doesn’t let go.  Battlefield Earth is known for characters that are either loved, or who readers love to hate, as well as for endless chapters of space opera adventure.  And for those who are just beginning to venture into Hubbard’s fiction, there’s no doubt more that they’ll come to enjoy. 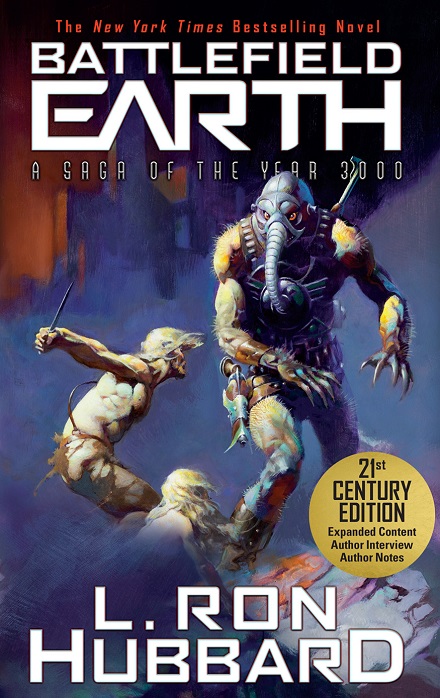 Is it the end of the world or the rebirth of a new one?

In the year A.D. 3000, Earth is a dystopian wasteland. The great cities stand crumbling as a brutal reminder of what we once were. When the Psychlos invaded, all the world’s armies mustered little resistance against the advanced alien weapons.

Now, the man animals serve one purpose. Do the Psychlos’ bidding or face extinction.

One man, Jonnie Goodboy Tyler, has a plan. They must learn about the Psychlos and their weapons. He needs the other humans to follow him. And that may not be enough.

Can he outwit his Psychlo captor, Terl?

The fate of the Galaxy lies on the Battlefield of Earth.

This book has captivated the hearts and minds of many, including some of your favorite creative geniuses.  From Brandon Sanderson, who praised its explosive pace across the massive narrative, to Kevin J. Anderson of the Dune Sagas, who hailed its adventurous spirit, all the way through to Neil Gaiman, who described it as “un-put-downable”, it’s been known to grab hold of even the most talented writer’s attention, and refuse to let go.  There is a reason that it’s endured all these years, and now, forty years after its debut, it has retained its charm, and continues to grab hold of new readers.  If you haven’t had the chance yet, do yourself a favor and give it a glance.  Check out Battlefield Earth: A Saga of the Year 3000 on Amazon today!

If you prefer an audiobook experience, you can pick it up here.  You can also click here to learn more about the Battlefield Earth universe.

And finally, a book trailer:

One thought on “Sci-Fi Promo: Battlefield Earth: A Saga of the Year 3000”