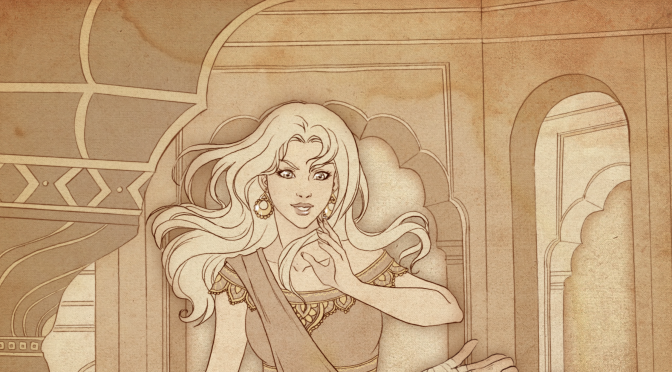 After introducing the Gathering, Lakmari’s interesting random celebration, we’ve got just a real quick one for you this week.  The second part of Remembered in Gold focuses more on the goodbyes than the glory that Kunal has the potential to find out in the world.

There are some potential links to follow-up material down the line if we find that people really dig Kunal’s story.

The journey back to his house was much more eventful than the one to the Gathering.  Countless citizens, even ones he was unfamiliar with, stopped Kunal in the streets to offer congratulations and advice.  All the while, Param was at his side.  When they finally did reach his home, the young men paused, hesitating to part.

“This is going to be the last time I see you, my friend,” Kunal said.

Param shrugged.  “It doesn’t have to be.  I’ve got nothing keeping me here.”

“I wouldn’t call your family nothing.”

“All older cousins who don’t even notice I’m around.  For all they know, I’m sleeping with the pigs.”

“Say no more,” Param insisted.  “I’ll even do the noble thing and leave them a letter.”

Kunal laughed and shook his head.  “You know much of this is kept in secrecy.  We’ve never seen one of the winners leave.  They’re always gone before sunrise.”

“And when the sun does rise, you can find me at Nordakai Falls.  I’ll be there all day tomorrow waiting for you.  Whatever mission the prince sends you on, you won’t be alone.”

A bright smile curled Kunal’s lips upward.  “Thank you, my friend.”  Both men stepped forward into a warm embrace for a moment.  “I shall see you in the light of the morning.”

Param clapped his friend on the shoulder and moved on.  Kunal watched his friend depart for a moment before pushing the door to his house open.

The sound of fitful sobbing was stifled abruptly.  When the young man closed the door behind him, he was surprised at the darkness of the abode.  The curtains had been drawn in the living area, and he could see the rest of the house had been similarly shrouded.  Still, dim shadows were cast upon the wall of the kitchen, their presence leading him there.

His mother sat upon one of the chairs surrounding their petite wooden table.  Her daughter had collapsed against her, buried within the folds of her sari.  Garati, his mother, looked up as Kunal entered the room, a weak grin appearing on her face.

“Why does Sesha cry, Mother?” he asked.

Garati shook her head.  “She knows you are leaving, child.”  The older woman gently patted her daughter’s head before allowing her hand to weave a gentle path through her dark hair.

“Sister,” Kunal said, “this is a great honor.  I go to follow in father’s footsteps – to find glory for our people.”

“You go to leave us alone,” Sesha cried.  She spun toward him, staring at her brother through tears.  The dark lines beneath her eyes had faded and run down her cheeks, and her mocha-colored skin was flushed.  She rose before her family realized and sped out of the room past her brother.

“What could be expected of me?” Kunal asked, sinking into a seat on the opposite side of the table from his mother.  “I am to tell the prince I decline?”

“Nonsense,” Garati said, waving her hand to dispel that notion.  “But your sister is right, you know.  Once you are gone, we two will have to fend for ourselves.  This house is too big for two women – too expensive.  Your father’s cousins will likely purchase it from us, and we’ll have to work their fields.”

“I won’t let that happen, Muhma.  I’ll send back whatever I can.”

“And your sister,” Garati went on.  “She is already an outcast.  With you gone, she will wither away in the shadows.”

“Sesha is growing up to be a beautiful woman,” Kunal contended.  “Why should she hide?”

The matriarch cast a sidelong glance toward her son.  “You know there is more to that girl than just a pretty face.  When the other children her age look into her eyes, they see the darkness there.”

“They’d be wise to steer clear of her then.”  Kunal stood again, placing his knuckles against the table.  “If Sesha doesn’t put them in their place, I’ll hear of it and return to exact my revenge.”

A sigh shook Garati’s weary frame.  “There’s no need for empty boasts, my son.  You and I both know none of the chosen have ever returned.”

Kunal circled the table and grasped his mother’s hand.  “I will, Muhma,” he said, lowering to his knees.  “I will do all in my power to make sure you are taken care of.  Sesha, too.”

Garati gave a gentle tug, pulling away from her son.  With her hand liberated, she tapped several times on his forearm.  “Better prepare yourself.  Wouldn’t want to show up to the prince in rags and smelling of sheep dung.  Go clean yourself in the river.”  She rose from her seat, tousling the boy’s hair as she followed in Sesha’s footsteps.

He could watch his mother depart for but a moment.  Kunal bowed his head.

One thought on “Remembered in Gold – Part Two”