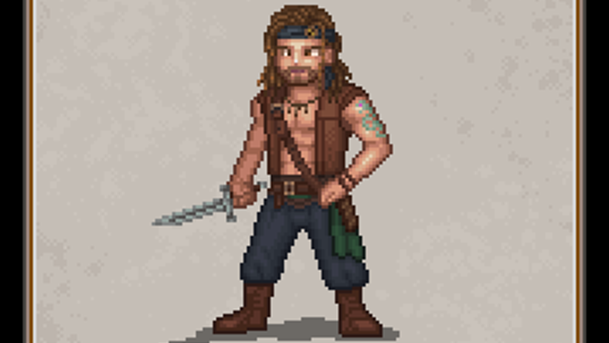 Howdy! It has been a tremendously long time since we’ve seen more characters in this awesome little pixel series.  A Relic game is something I would absolutely love to explore more of, but as of right now, we’re only working with one or two artists, and our main one can sometimes be a little inconsistent!  Serathus is an incredibly busy man, and sometimes we go months without an update.  It’s been a crazy couple of years in any case, so the delays aren’t completely without merit.  But, in any case, we ended up working with Serathus on a new character who hasn’t actually shown up in any of the books yet, but is well on his way.  Move along to see art for the pirate, Basta! 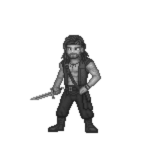 Now, while we haven’t seen the literary introduction for Basta yet, we have seen him illustrated by another artist, Barnswallow.  Serathus does a great job capturing his essence in this pixel art, and fits a lot of character into so few pixels!  When Basta does appear, it will be in at least two books—the first Relic book, as well as the second book in The Ranger series, Heart of the Sea.  Basta is one of the good guys, along with his paramour, who we will see at the beginning of next year. 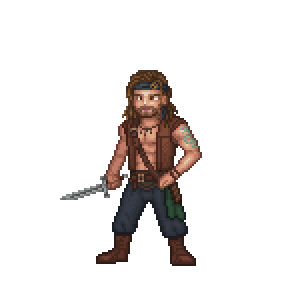 Basta is the first mate of the ship he’s on, typically, meaning he’s got a lot of work to do, keeping the rest of the crew in check.  In a lot of ways, he’s the face of the ship.  On the other hand, he keeps some secrets of his own, and they’ll be interested to unveil as time goes on.

As always, we close with a card version of our hero.  We’ve finally pushed into the second half of the hero characters, and while we left off with somewhat sad news last time around, I’ve got some other hopeful news instead going forward.  Serathus and I have partnered on additional sprites in this series, and he will be tackling some would-be enemies that the heroes might run into along their journey.  Again, his busy schedule may affect how quickly we can structure some of those for the website, but in any case, it’s interesting to think about.  On the other hand, we’ll see Basta’s love, Catelyn, in just a few weeks, so stay tuned!