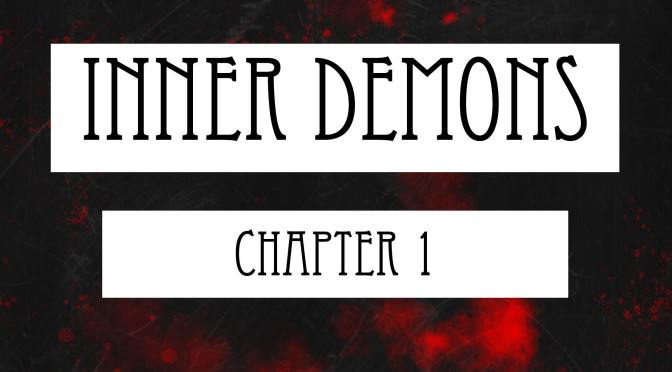 As many of you who have read The Enemy Within have already figured out, I have a penchant for demonic presence in my works.  Hexaeus wasn’t exactly a complicated villain, but he certainly did complicate things.  There wasn’t much complexity to him, which made the end game of the trilogy that much more primal than in the past two novels when the antagonists might not have been what they appeared to be at first glance.

One of the hard things to do is balance those demonic entities with all the other characters in Tellest.  I certainly could do it, but it might make more sense to write a novel set in the demon wars, which was highlighted several times across the board already, primarily whenever anyone mentions Semia’Laz, the Fallen Angel.

Instead, when I was given an interesting opportunity, I took it.

A lot of you are already familiar with DLeoBlack’s work.  He’s done several covers for me, and we’re getting ready to present the fourth one soon.  Several days ago, maybe a couple weeks back (my kidney stone episode has removed all concept of time from my mind), he expressed an interest in illustrating a weekly serial comic book, and wanted to know if I wanted to craft the story.

I think I might actually still be in shock.  In between my prescription-drug-filled haze and copious amounts of napping, I set my nose to the grindstone and got to work on building a setting and a vague summary.

We knew we wanted to focus on a character who had a dark side, possibly a demonic presence.  But at the start, that was all we knew. That was when Leo told me to get to work.

On the outside of the comic, I knew that Leo was planning on bringing the complete issue to a French editor when it was ready.  French editor, huh?  That gave me the where.  Popular opinion at the moment, including an upcoming Assassin’s Creed game gave me the when.

Inner Demons is set in France just before their revolution.  That’s not to say that we won’t grow into that point in time.  In fact, a lot of what happens in Inner Demons may be a retelling of what we think we know of history.  And the best part is that I’m not exactly restricted to moving forward.  Through the course of researching, I went back and forth trying to figure out when and where things made the most sense, and found a lot of cool points and places that would be more than worth looking into.

I really hope that this is another interesting thing I can share with everyone.  I’ve seen Leo’s finished panels for several of the pages, and he’s done a remarkable job.  I’ve often dreamed about an opportunity like this, and now that I’m a part of it, I still can barely believe its real. Stay tuned for more updates on Inner Demons.