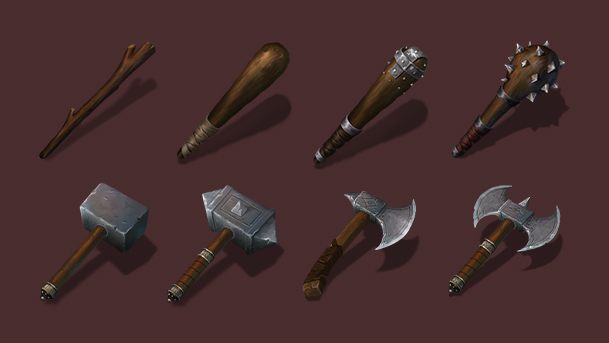 Howdy folks!  So, we are nearing the end of our time in Merge Dungeon (until we can reasonably come back to try and give it new life as a mobile title).  That said, we’ve still got a few things to show off, and we likely won’t be able to get everything wrapped up until February at the latest.  There is one chamber in the dungeon that is continuing to lift a lot, and that’s our equipment chamber.  It allows players to permanently upgrade certain aspects of their army, and gives them an opportunity to see some incredibly rare merges.  Today, we’re going to be looking at the first set of weapons.

It should seem pretty reasonable that the first set of weapons you could get in the game are pretty rudimentary.  We even start with just a stick, something that the simplest of monsters could swing around.  But as you move along, we get wooden weapons with a little more finesse to their creation, from cudgels, to metal-capped clubs, to spiked clubs.

After that, the blacksmith has his work cut out for him, because he’s crafting hammers and axes with a little more oomph to them.  We start with a simple hammer, then create one with some nice spiky bits, and then completely forego the blunt weapons and move to crescent-edged axes.

Each equipment room has thirty items that you can work your way up through.  That means that what you’re seeing here is just the tip of the iceberg.  We still have another set of weapons that we’ll show off, but only the most die-hard mergers are going to see the most impressive weapon sets.

We also have some defensive equipment we’re going to show off soon, so be on the lookout for that around the end of the year.