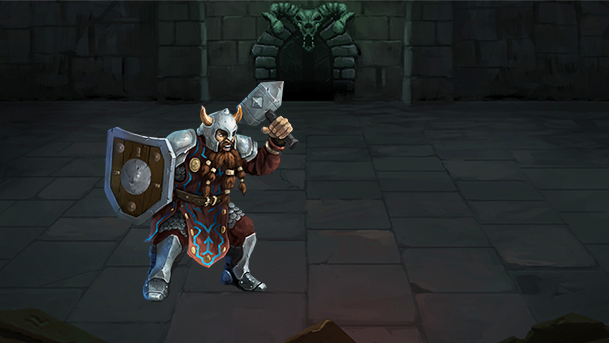 Hey there!  We’re back with another look at some of our heroes from Merge Dungeon, who, as you know, have received some pretty nice glow-ups from the card game.  Sergei joked that he knew these guys since they were little, but they’re growing up fast!

First off, we’re going to look at Vesso Jaith.  Vesso is a pretty handy trapper, and he’s a decent enough thief to boot.  There’s rumors that go around that he’s not a full elf, and that’s followed him all his life, so that could speak to the sourpuss we see here.  Vesso hasn’t had his chance to shine in the novelization, or Tellest books or short stories, but you never know when you’re going to get called up to the big leagues!

Next up, we’ve got another hero who has had a few rumors flung around about them.  Vya Moot is a kobold warlock, but over the years, it’s been said that she’s not a pureblood kobold.  Rather, they think she has some gnoll in her blood.  We also had a little bit of an interesting turn of events when Sergei first did some work on her.  Vya is a female, but the original sprite artwork was vague enough where it could have gone either way.  We had since had at least one more piece of art made for Vya, but Sergei likely didn’t see it.  Suffice it to say, we first ended up with a male version of the character, before it was tweaked to give us the female version you see here on top.  Hmm, could it be something to do with the Tellest multiverse?

Here, we have Vaulen Lightfoot, one of the stars of the show.  Vaulen was the main character that we used to push the first card game, so he’s got a special place in my heart.  He’s also one of the pseudo-leads in the upcoming novelization, and he’s awesome to hang out with in the book.  Thus far, he hasn’t shown up anywhere else in the Tellest universe, but that’s not to say that he couldn’t.  Maybe keep your eye out for any other mentions of the Lightfoot clan in the future!

Alexander Baron is known for being a rich, smarmy fellow.  He uses money to get what he wants, so he might have slipped me a little in order to show up as one of the characters in the upcoming novelization.  We haven’t seen the wealthy settlement of Kingsly, where he and a bunch of other ultra-wealthy people reside, but Francois is currently working on a set of sigils in which Kingsly will be represented.  Maybe we’ll hear a bit more about Alexander there.

And finally today, we have Devaniel Quinnis.  He’s another character who featured in the Kickstarter campaign for the original tabletop game.  Devaniel also shows up in the upcoming novelization of the game, actually meeting up with one of the characters I’ve mentioned above.  Devaniel is a pretty cool character for someone we know very little about, so I’m excited to give him a bit more of a chance to shine in the story, which will be here before you know it.

Well, that’s it for today, but we’ve still got more to show you when it comes to the Merge Dungeon crew.  We’re actually going to be making a hard right to something a little different after this next set, but we still have plenty of heroes to show off when we get back on the road again later this year.  Stay tuned!