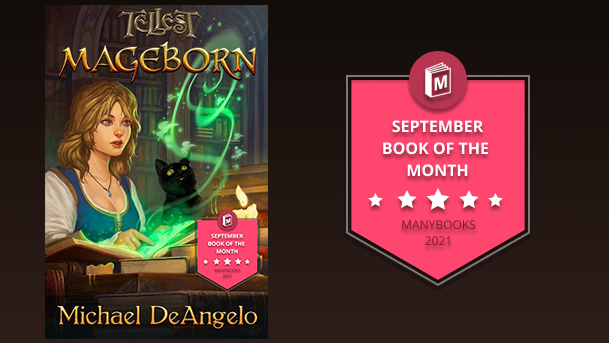 Well this is a pleasant surprise.  I learned yesterday that Mageborn, the first book in the Ancestral Magic series, was chosen as the Best Fantasy of September 2021 by Manybooks.net.  It’s a huge honor to me, and I couldn’t be happier to throw that little pink badge on my book cover!  You can click on the image below to head over to the article where Mageborn appeared, or just click here.

Mageborn is the first novel in the Ancestral Magic series by Michael DeAngelo. This fantasy story features a woman named Adelia Kreegan, who is summoned to Forsynthia by the master sage, Gaston Camlann, when she first displays her magical powers. Although Adelia is untrained, the wizard takes an interest in her and helps her hone her gift. However, while she is busy developing her arcane reflexes, Forsynthia falls in the crosshairs of an assassin bent on sowing chaos and unrest. Adelia is not just tasked with rooting out the assassin but also has to deal with a hungry dragon that has ventured too close to the city.

Mageborn is currently free on Amazon and other ebook retailer sites.

I’ll be looking forward to more of my books showing up on Manybooks.net in the future!