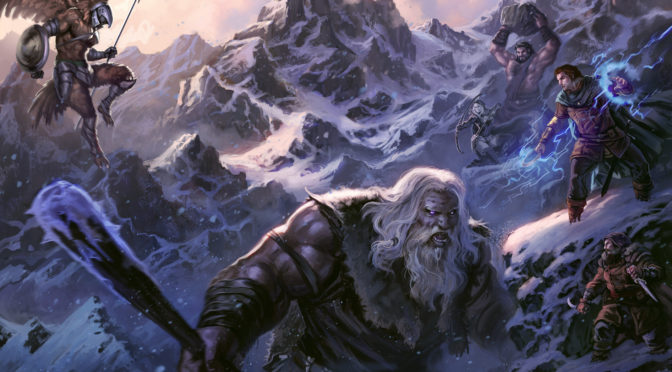 A crowd of dwarves surrounded the strange creature, who shared the pedestal beside Vaulen’s foot with only two others.  He looked to Bolt and Dorn instinctively as the shouts grew louder and angrier.

“He’s in league with them harpies as sure as I’ve had the beard since I was ten!”

“We should pluck him bare and see if he can still fly if we threw ‘em atween the cliffs.”

While Dorn worked to placate the crowd, raising his hands as though they had the power to quell the superstitious lot, another dwarf climbed onto the pedestal.  Bolt swallowed away the tension in his throat, having his fair share of conflicts with that member of the clan.

“Ye said the same thing about a human baby that came to us all them years ago,” Lund said, passing a glance in Bolt’s direction.  “We all know the stories.  And we know how it ended up.  Some of ye wouldn’t even be here if it weren’t for the tall bastard.  A bad omen?” He spit on the ground just beyond the statue.

Finally offered some quiet, Dorn inhaled deeply, and turned to the stranger.  “That still doesn’t excuse you for whatever it was you were doing up there.  That’s a link to our heritage—our history.  It’s not for folks to lounge about on and offer a place for tired wings to rest.”

“I wasn’t resting,” the bird man said.  His baritone voice surprised the lot of the dwarves, who half expected him to reply with a screech.  “I was trying to tug the mythril free.”

That incited the crowd again, and even Lund realized there would be nothing he could do to placate them.  He raised his hands in defeat and hopped from the pedestal.  Their loud cries to banish the winged thief echoed out until more of the clan emerged from the long hall.  Those closest to the statue almost fell over when a voice they had not expected boomed out.

“Quiet down, the lot of you!” Dorn cried.  His face had gone deep red, and even his son looked on with wide eyes.  “You think there’s mythril in the statue or on the hammer?  And that we wouldn’t be using it?  Never mind the fact that it wouldn’t even catch a lightning bolt—the whole reason the statue was built here.  Our feathered friend is wrong.  There is no mythril up there.”

“There has to be,” the bird man protested.  “The caravan drivers said—”

“No one knows this statue better than me,” Dorn interrupted.  “Now, you’d be better off telling us why you were trying to steal from us in the first place before you try to argue there’s mythril where there’s not.”

The stranger nodded, and the bronze feathers around his neck glimmered in the sunlight even in that subtle movement.  “My name is… ‘He who walks with the Sun’.”  He looked to the dwarves, noting their curious glances.  He gave a knowing nod, and spoke again.  “I am called Keota.”

“And was it the sun that told you to steal from us dwarves?” Dorn asked.

“We didn’t think anyone would notice or care.  No one sees the top of a statue unless they have wings.”