We always seem to go a few months between interviews at Tellest.  It’s nice because it gives those members of the Otherworld a chance to really let their work stick to the pages of this website.  Still, it’s always exciting to get the chance to work with one of them.

Early last week, we were afforded the chance to look at the work of Stephen Prescott, the scribe that gave us Out to Give a Dragon Treasure.  Well, we’ve landed an interview with the writer himself, and he’s sat down to dish on his novel and the future of his world.

Tellest: In Out to Give a Dragon Treasure, it is revealed that the prince has gone on many an adventure before.  Do you think we’ll ever see those adventures?

Stephen Prescott: While those tales would help explain where the prince has been the current plan is to move his character development forward. The next book is planned to be about his travels to the west with the third book bringing him back to once again deal with trouble in his homeland. I would at some point like to go back and give some more of the adventures of Naspeir and Reulok. It would be fun to explain how Naspeir gave up the adventuring life.

T: Since there was some evolution for the prince’s character, will we see a more refined, cautious protagonist, or can we expect to see him acting as foolhardy and brash as he did before?

SP: There is still a ton of growing up the prince needs to do. In the next book several of his advantages that he had in the first will be stripped away and he will have to rely on himself more which will bring entirely new challenges for him to overcome. Plus it is time for him to have someone that can go toe to toe with him and does not back down just because he is the prince. That is all the spoilers I can give at this time because the book is still in development.

T: Thank you very much for that little sneak peek.  It’ll be great to see the prince in action again!

T: How did you come up with the kingdom of Forlorn?  It’s quite expansive, and you’ve even got a map available to help your readers enter the world you’ve crafted.

SP: Forlorn came about from several different elements. Part of it comes from old D&D gaming sessions. Other parts came from designing a world in BioWare’s Neverwinter nights. The map helped me plan out how those places were connected and travel time between them. It also helps the reader follow along the story. When writing I found that I needed to build the map to plan things out. Plus the map helps explain why when they are making choices of where to go; it shows they cannot just drop by one place on the way to the rest since they are in different directions. 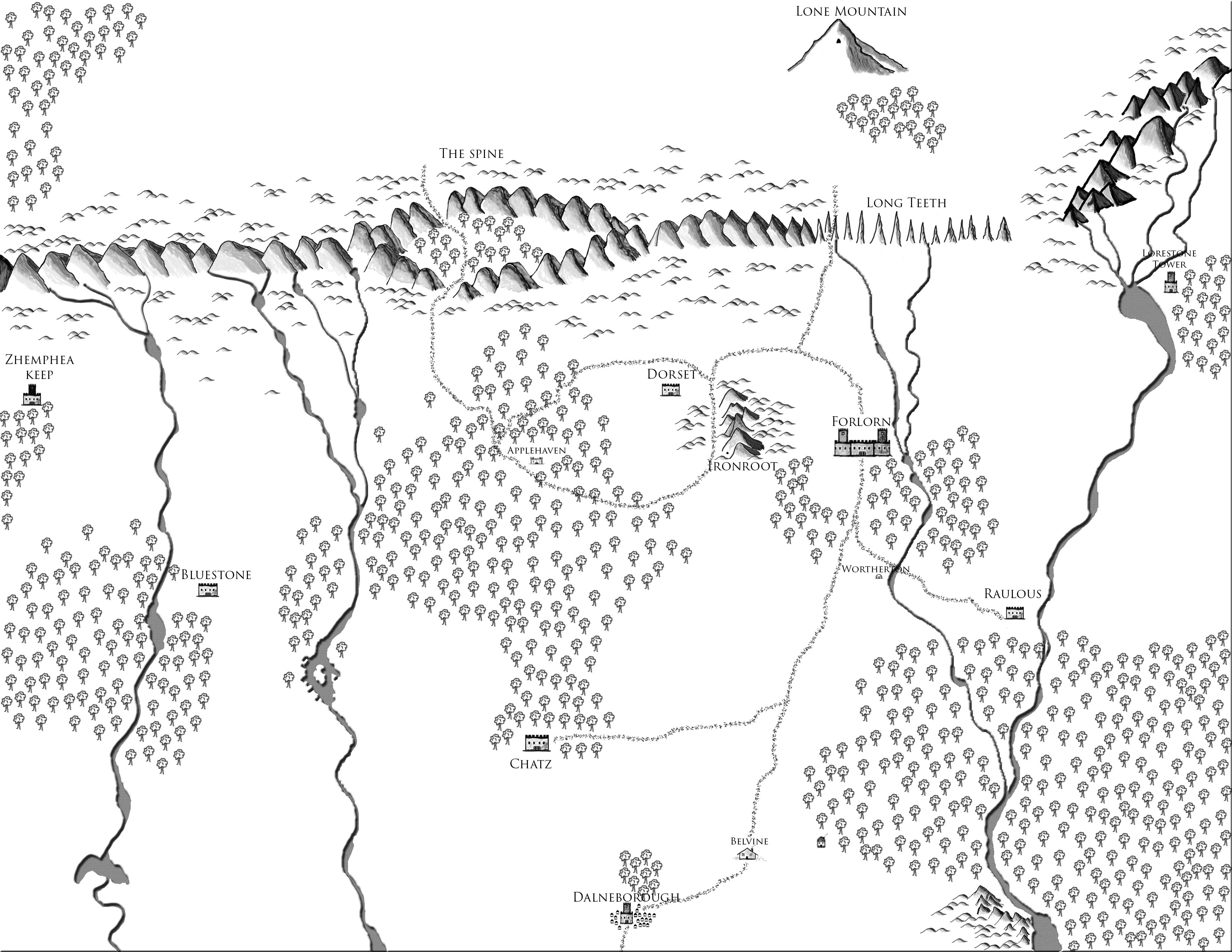 T: Out to Give a Dragon Treasure has a very personable sense of humor.  What authors have you found inspiration from to give you such a voice?

SP: Out to give a Dragon treasure is modeled after the style of Robert Asprin’s Myth series. I always enjoyed the blend of fantasy and humor with a little bit of wit. I also saw some of Questor Thews character from Terry Brooks Landover series in my character Blue, I mean Grayson von Ibin. Not the Questor of the first two books but the one after he fought Strabo and had finally found himself.

T: You mentioned that Dungeons & Dragons fed into the idea of Forlorn.  Have you seen it come back the other way?  Have your writings informed any other mediums, such as when you go back to play games like Neverwinter Nights?

SP: In the current online Neverwinter I did have the idea to build out parts of the world of Forlorn but I found the models and dialogue options did not fit what I wanted to do at the time. I do what to go back and see if I can do it justice in the future but currently I just have not had the time to invest.

T: Have you ever thought so far into the future about other mediums you’d like to see your world in?  Maybe you could invest in your own game development?

SP: I would love to see it come to the big screen but only if the world was kept true to the story so I doubt it would ever happen. I think the best part of that would be seeing how people would cosplay the characters and see how they envisioned them in their heads. Just because I am the author does not mean that this is not their world. The idea of it becoming its own tabletop or video game would be interesting. I guess if there was a big enough calling I could start a Kickstarter campaign but currently I need to flesh out the realm by publishing the other books then maybe I can find the time. You do bring an interesting idea though.

T: The main character is simply called by his title throughout the story, leaving his identity somewhat disguised.  Do you see any of yourself in this young, brash prince?

SP: If by see any of myself in him you mean my opposite then yes. I was not born into the upper crust of society and given anything I wanted which is the realm the prince is from. I wanted to tell a story where you see the main character evolve and become better and more open minded than where they are at the start of the tale. Also by not having a name it allows the reader to kind of meld and become that character themselves.

T: Do you think we’ll have more characters to identify with in the sequels?  Or is the plan to keep the prince the main focal point?

SP: This series is about the prince so to move away from his tale would not do it justice. I have always wanted to tell a story then tell it again from another character in the story’s point of view so maybe in the future if there was another strong lead I could see having the point of view switch back and forth but I am not there yet.

T: Can you think of any of your current characters who you’d like to see the perspective of?

SP: To hear this same tale from Alagar’s point of view would be interesting. It would kind of be like getting the story from Rosencrantz or Guildenstern’s point of view. He is a minor character and it would be fun to explain why he puts up with the Prince calling him Red all the time.

T: You’re also involved in digital art creation.  Will we see any integration between your two interests?

SP: I keep wanting to add drawings and illustrations into the books but I like to give the reader the ability to create how the characters and the world look in their own minds. Once I add a drawing of a person or place in then that kind of sets things in stone. Fantasy is about the imagination and where it can take you. If I add in anything I want it to broaden the world, not diminish or confine it.

T: Besides Reulok the centaur and Naferooth the dragon, Out to Give a Dragon Treasure features dwarves, hobgoblins and even a sphinx.  What made you decide to include such a variety of creatures in your story?

SP: I wanted to set the stage that this is a high fantasy realm so to do that it was just natural that the fantasy creatures would be all throughout the tale. 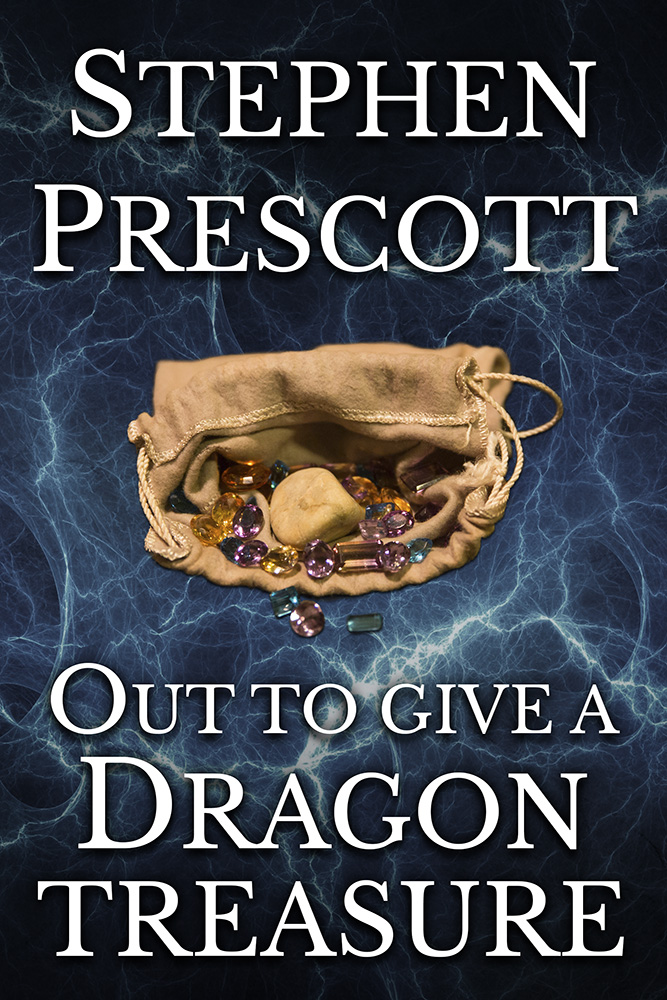 T: Can you give us any other ideas about races and creatures that you’re planning on adding into the sequels?

SP: The next book moves the story further to the east. Currently I have the character main cast filled out and certain character advancement and setbacks planned but no specific encounters written. I do still plan on expanding the creatures in the realm and bringing forth some that are specific just to it.  All of those are still in the very early stages and I am not ready to share anything that might not make it into the final book quite yet.

T: Is there any way that we could convince you to let us know if all of our favorite characters will be coming back?

SP: In the next book the current cast is scaled back otherwise there just would not be a challenge for this group. Once we move into book three, well then we catch back up with everyone and we find out if the whole group is up for the new challenge that is at hand.

T: Are there any other projects that you might be working on?  You clearly have a vast imagination.  Readers would be interested in finding out what else you’re working on.

SP: My current focus is writing another fantasy book with a completely different cast of characters. This group, while all being childhood friends (and two of them brothers), brings a classic fantasy tale to life. When you first meet them they are just kids. You find out how they gain their skills and then as the story advances you move forward with them as they grow into an adventuring group. Since they do have a time when they are all apart things happen that shape them and a few dark secrets are formed. Some they cannot even tell their own truest friends about for fear of what they would think.

If I can create the art work I also have an inspiring children’s book I would like to publish. There is also a work of on-again and off-again historical fiction I have been working on for years that I would love to finish, but the amount time and research it takes to credibly pull it off… I have no idea when it might be ready. I also have outlines for a few works of science fiction I would like to dabble in and see if I can actually bring those worlds to life.

T: It sounds like you’ve been working prolificly for quite a while.  In that case, we’ll let you get back to your work.  Thank you for taking the time out of your busy schedule to talk with us.  We can’t wait for our next visit to Forlorn!

We’re so happy that we were able to have a chat with Stephen Prescott.  He was a very humble guest, and we learned a lot about Forlorn and the world of Out to Give a Dragon Treasure.  We wish him the best of luck.  If you’d like to pick up his debut novel, check it out on Amazon.