It’s been quite a while since our last interview here at Tellest and the Otherworld. If you don’t remember it, it’s because it was way back in 2017. But we have been on a roll here at Tellest lately. Not content to just post about all the great new fantasies coming your way, we’re also aiming to speak to their creators. 2018 is going to be a busy year for interviews, and we’re starting with a very interesting one. H. Gorlitz Scott is the creator of the Sivoa series of books, and she’s got plenty to talk about. Read on to see what makes Scott and Sivoa tick.

Tellest: Welcome to our interview. It’s fantastic of you to join us. I’m going to shake things up a bit for this one as your eye for fantasy is a little bit different than some folks.  You’ve got a pretty vast reach with fantasy, across a few varied mediums.  Where did it all start?  Were you an artist first, or a storyteller?

H. Gorlitz Scott: Honestly, I was a consumer first. I always had my nose in a book or could be found watching movies. Following that, I suppose I was an artist, but I always drew with the intent of complimenting stories. 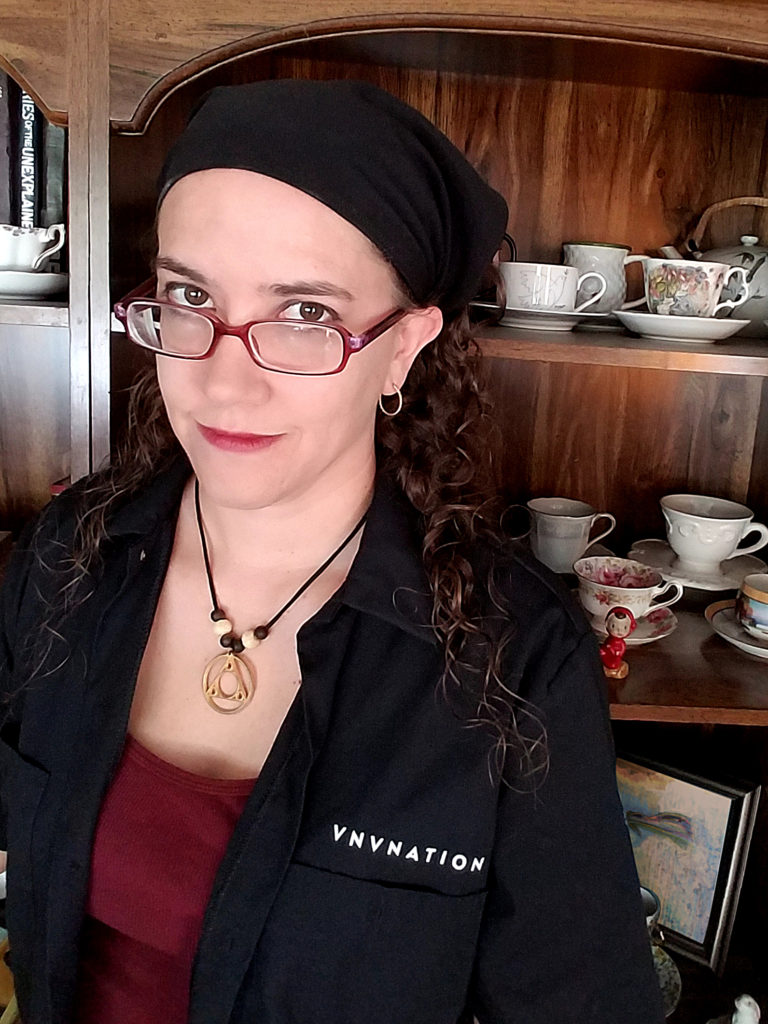 T: You also do work for others. What are some of those projects and how have they influenced your own work?

HGS: Working for others has actually improved the quality of the stuff that I do for myself. It used to be that I was content with simply getting my ideas down in sketches and notes. Working for other helped me realize that I could complete large projects with quality. They also helped me understand that the way I use my art to tell stories is something people desire.

My best example is that early on in my art career (fresh out of high school, in fact), I came across a contest to illustrate a children’s book. We had to draw our interpretation of the text for the first page and submit it in order to win the rest of the paid gig. As it turned out, I was the only artist out of hundreds to not “submit something that looked like Scooby Doo” and one of few that actually paid attention to the writing. I won that contest and the title character of Captain Halloween wound up being a prominent character in the St. Louis Halloween parade.

More recently, I have illustrated battle campaign maps for the Historical Game Company, which creates table-top alternate history games. I want to say that this particular project is why Sivoa currently does not have a map. It made me realize that I could do a much better one than the one that I have.

T: What inspired you to start writing?

HGS: Self entertainment I suppose. I used to write assorted scenes in sketch/notebooks that I thought would seem cool in other stories. At some point I combined my two creative outlets and started doing little one-shot comics for my brother.

T: Sivoa: Sunrise has obviously taken up some of your time. How long ago did you begin working on it, and how did the process begin?

HGS: Throwing back to my childhood, Sivoa was born of a friend’s typo and a group desire to make Mortal Kombat 3. After MK3 came out, it changed into these ongoing free-form tabletop game sessions that didn’t really go anywhere, but I kept the groups character notes anyway. Eventually, I came up with a real story for some of them in my sketchbooks – which were discovered by my friend Sarah many years later. She asked me so many questions about it that I eventually made a comic series to appease her. Many years of doing that led me to realize that I wasn’t a fast enough artist to get the story told within my lifetime. In 2014 I stopped the comic and started on the novels. There are three planned in total for the main story. 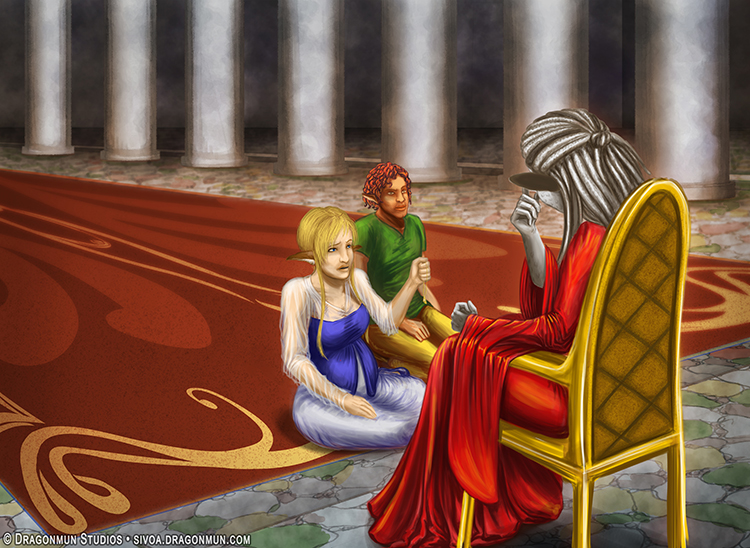 T: What about spin-offs and things of that nature? Sivoa seems like a world rich with content and other tales.

HGS: I would be lying if I said I didn’t have supplemental publications and spin-offs in mind. One of the things I’ve always dreamed of was doing a table-top role-playing game for it. My husband dabbles in creating such game systems, so we might have one eventually.

T: Are you thinking something as robust as D&D or Pathfinder? Being able to pull something off like that has got my nerd senses tingling!

HGS: Awww!!! Yeah, pretty much – though, perhaps a little more narrative than statistical. Something rules-light to medium. He’s been working on a new dice rolling system that seems relatively easy to build settings for and I can’t wait to try it out! Much of Sivoa is already put together in a DM’s guide-styled compendium because of its roots.

T: How did you come up with Dragonira as a character?

HGS: She was my only made-up MK3 character. For 10yr old me, I figured a dark-haired, punk, teenage version of myself would be cool. I also decided having a dragon tattoo on her would be cool, so I named her after the fact that she had a dragon tattoo.

When MK3 launched and we gave up the delusion of being the prodigal group of kids that made the next game in the series, I redesigned her.

T: But now you have the opportunity to make a Sivoa fighting game!

HGS: Haha! Funny you say that. There was a M.U.G.E.N set for it, made by some fans of the comic series. Maybe someone with a mastery of delving into the archives of the internet will be able to dig them back out again.

T: Considering your background and where you find inspiration, would that be another area you could see yourself moving into in the future?  Some sort of game development with your own stories at the forefront? Besides tabletop, of course.

HGS: With video games? No, not really. Even back then, I think that what we were looking for was the creative input and interactivity that tabletop offers, though we might not have known it at the time. That said, I would be willing to work with a video game studio if they were really interested. It’s just not something in the plans at current.

T: Who is your favorite character to write about in the Sivoa series?

HGS: It’s almost an exact toss-up between Dragonira and her Father. Both of them were fun to write for different reasons.

T: Could you tell us a little about Sivoa: Mourning?

HGS: Without going into spoilers, there’s a few characters that kind of fall out of the spotlight between Sivoa: Sunrise and Sivoa: Zenith (The second book in the series). I wanted to commemorate them with their own little illustrated scenes. I also like calendars, so I decided to release one of these stories a month throughout 2018.

T:Can you give folks a sneak peek of sorts to Zenith? Without going too deep into spoiler territory, who is your favorite new character you introduce?

HGS: There is actually a preview for it in the back of Sivoa: Sunrise – sandwiched between the glossary and acknowledgements segments. There is a significant time jump, which that chapter spells out. Because of this, there is a big cast of new characters and picking a favorite from them is difficult for me. I will say that I do enjoy playing Dragonira off of her antagonists, so I particularly enjoy writing this crazy high-priestess sort by the name of Majika.

T: It sounds like Dragonira has her work cut out for herself in Zenith!

HGS: Boy does she! Haha!

T: What are some of the other stories you’re trying to tell outside of the Sivoa books?

HGS: I have a pirate story on the backburner, as well a dream-based anthology that needs to be cleaned up. I have a comic scripted that delves into the dilemma of being an artist “without a style,” but the only non-Sivoa thing that I am currently working on is a web-comic collaboration with a friend. That’s primarily her work, but I do the lettering, background colors, and special effects for it.

T: Folks can find you on your website, www.dragonmun.com – since you do so much, that site is like getting lost in one of the most awesome mazes. It’s definitely a cool kind of rabbit hole to go down. Where would you recommend folks start?

HGS: It really is kind of a maze, isn’t it? I guess the best place to start would be the slider at the very top as it highlights my biggest projects and will take you to them specifically. I also have a sitemap linked from the top menu. It’s a simple page, but it divides the sections up so that anyone can easily go to what they came to the site for.

Of course if anyone needs a guide, they are welcome to email me at heather@dragonmun.com 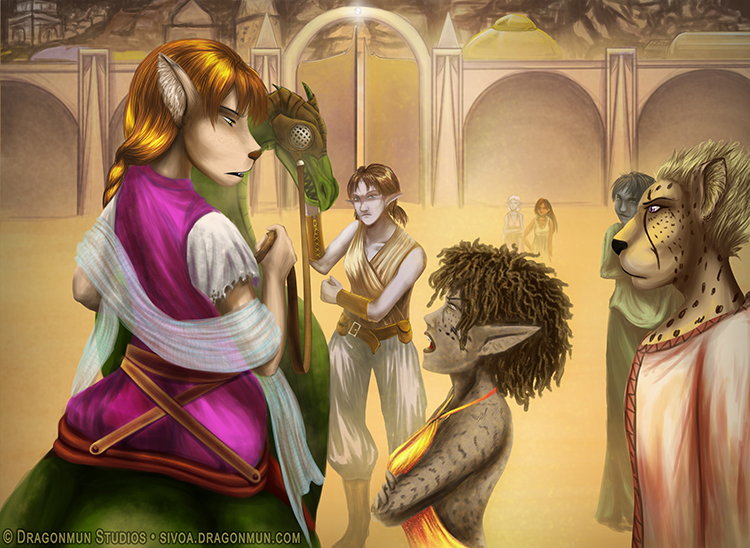 T: With so many forms of creative expression at your disposal, what would you say is your favorite kind?

HGS: Oh my gosh, picking one is impossible!

I love writing because I can dive into a character’s head and bring out their thoughts and emotions in a way that is relatable. I love illustrating because I can show people exactly what I want to describe. The marriage of the two in the form of comics is somehow a third outlet that lets me primarily focus on the action. Sometimes I’ll do art in one formto help me plan the others. I’ll storyboard the action of a scene that I will then write, I’ll write an image that I want to draw, and I will sketch the environment/characters/items that I want to write or draw.

While they are all technically different means of creative expression, they’re all part of how my brain works. I use all of them.

T: Is there anything specific you want future fans to know about you and your work?

HGS: Just that if I’m quiet, I’m either hitting the convention circuit or busy creating new stuff for them to enjoy. My occasional lack of presence on social media is not indicative of laziness – which seems to have become a common misconception working against many of the creative I know. If you’re worried that I’ve fallen off the planet, please check the website or subscribe to my monthly newsletter.

Also, they should know that I love them. 🙂

T: I’d like to thank Scott for partaking in this interview. It’s always nice to talk to a fellow creator, especially one you can tell is so passionate about their work. Don’t forget to check out Sivoa: Sunrise on Amazon!

One thought on “Interview with H. Gorlitz Scott”