Howdy folks.  We’ve got a surprise second entry today to take you into the weekend, and it’s a lovely bit of traditional fantasy that you won’t soon forget.  If you like your books filled with magic and dragons, you’ll love your first trip to The Kingdoms of Felspar.

From the moment you begin reading the latest work of author MJ Spires—her first feature-length fantasy—you can tell how much she loves the genre, and that goes beyond just reading and writing it.  You can feel the craftsmanship that has gone into The Kingdoms of Felspar, which is why it may feel like a book much older than its release date implies.  It feels like a classic Dragonlance novel, or some equivalent, although it is refined enough to make it fresh and gripping for modern readers.  One thing is certain: this book is made with love and passion. 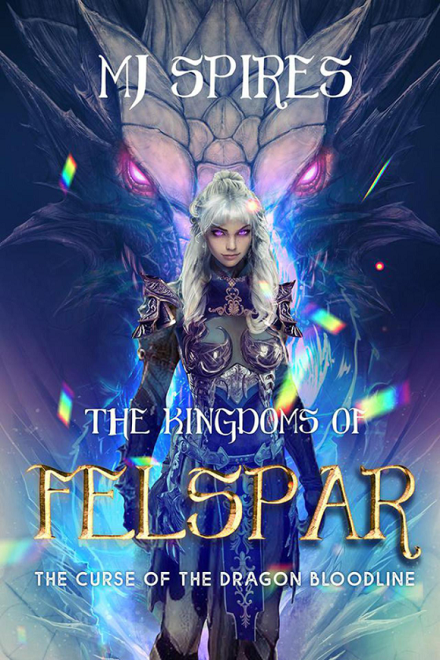 As guardians of the land, Dragons have ruled and protected Felspar since the beginning of time. Now, the greed of humans and their lust for power has grown to unimaginable heights. Enraged that the blood of her offspring has been shed for man’s gain, the Legendary Dragoona is determined to stop them. Even if it means destroying every last one of them.

The Quest for Power

Resentful of their own mortality, the Kings of Felspar have tried to harness the power of the dragons for centuries. Although punishable by death, some will not be stopped from seeking that power for themselves. After all, who would dare challenge a King who holds such supremacy?

As the Kingdoms of Felspar are plagued by the wars of men and dragons, a new bloodline is discovered. An abomination produced of both human and dragon blood. A bloodborne child strong enough to survive infancy with the traits of the dragons was unheard of before now. Could this new bloodline be the link to bring peace to Felspar, or will it be the end of all mankind?

Spires cares about each of her characters deeply.  The cast is spectacular, and readers will no doubt fall in love with each of them in their own ways.  They have a lot of heart and it is easy to be sympathetic to their plights, and to be captivated by their quests.  This first journey into Felspar is filled with page-turning revelations, a world of deep lore, and an epic scope.  The book is open-ended enough to warrant a sequel, but it can also be enjoyed as a stellar standalone, so don’t wait on it.  Check out The Kingdoms of Felspar on Amazon today!

Like Loading...
|  Tags: Fantasy Promo, MJ Spires, Otherworld, The Curse of the Dragon Bloodline, The Kingdoms of Felspar

One thought on “Fantasy Promo – The Kingdoms of Felspar”