If it appears that I’ve been a little scarce lately, I’d like to apologize.  I recently took a little holiday break, and didn’t attend to my twitter all that much.  That said, I wasn’t completely abandoning my duties as the lead Tellest writer. While in Atlantic City, I finished the penultimate chapter of one of the novellas, clocking in at about thirteen pages (it’ll be even more when it gets squished down to book size).  I’ve had issues in the past with action sequences rolling out of control, and this scenario was no different.  We have over a dozen dwarves doing battle with a ring of harpies, and things ended up looking very messy – no doubt Nace is going to have to help me tighten the strings on those events a little bit.

While I was gone, the very first secondary story was released.  Fallen takes place so far out of the way compared to the events of the Child of the Stars trilogy.  That was the wonderful thing about it though.  It was simple, it was isolated, and I feel like I told a lot in under 1500 words.

As I said before though, Tellest is not, and cannot just be me.  Within the next two to three weeks, I’m hopeful that we’ll get the first official story released that’s not written by me.  Becoming a Man will be released on Kindle for .99, and will showcase some of the established characters that we’ve already seen, but from someone with a much different perspective. 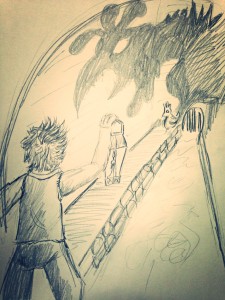 Concept Art for Becoming a Man

This past week also heralded the last of the “classic” encyclopedia entries.  We’re going to take at least this week to start working on making the encyclopedia have more of a wikipedia-like feeling.  You’ll be able to move from Kaja to Kobold to Romus Youngblood via hyperlink, and it should make the world of Tellest feel more connected.  After that, we’ll be back into the regular swing of things, releasing an encyclopedia entry every week for the foreseeable future.  I’d also like to try and find some way to give the readers the opportunity to decide what order the encyclopedia entries are released.