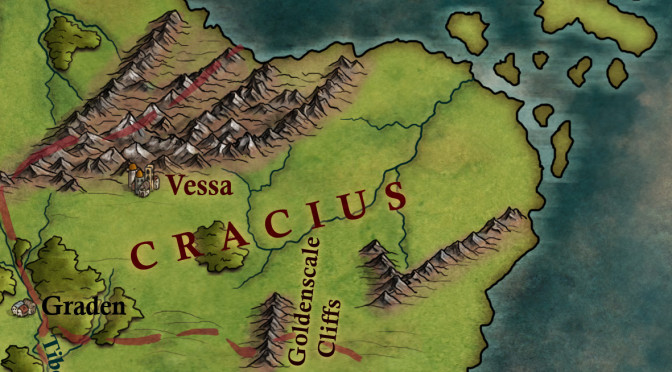 Cracius is named after an explorer, Hector Cracule from Erenea who sailed and mapped the majority of Tellest.  He was also responsible for the naming of Craceon, in the continent of Saveon, which was discovered first.

Cracius is bordered by mountains on its northwest and southeast, and by the countries of Raleigh on its west, and Warus on its south.  The ocean also borders it on its northeast, though several islands that are possessed by the different Draconian countries sit in that area.

Parts of the country are significantly colder than many of the other places in Draconis, due to the high elevation.  The capital of Cracius, Vessa, sits high up at the top of the plateaus of the country, exposed to wind and snow.

The majority of the civilized part of the country is moderate, and contains many forests and plains, as well as large lakes and rivers.

Because of the cold weather within much of Cracius, not many races actively live there.  The country was originally inhabited by humans, dwarves, elves, avarians, nagas and harpies.  The humans, elves and avarians all live at different altitudes, but the nagas and harpies only live at the plateau level or higher, leaving the elves relatively safe.  Most of the dwarves left Cracius several centuries earlier. 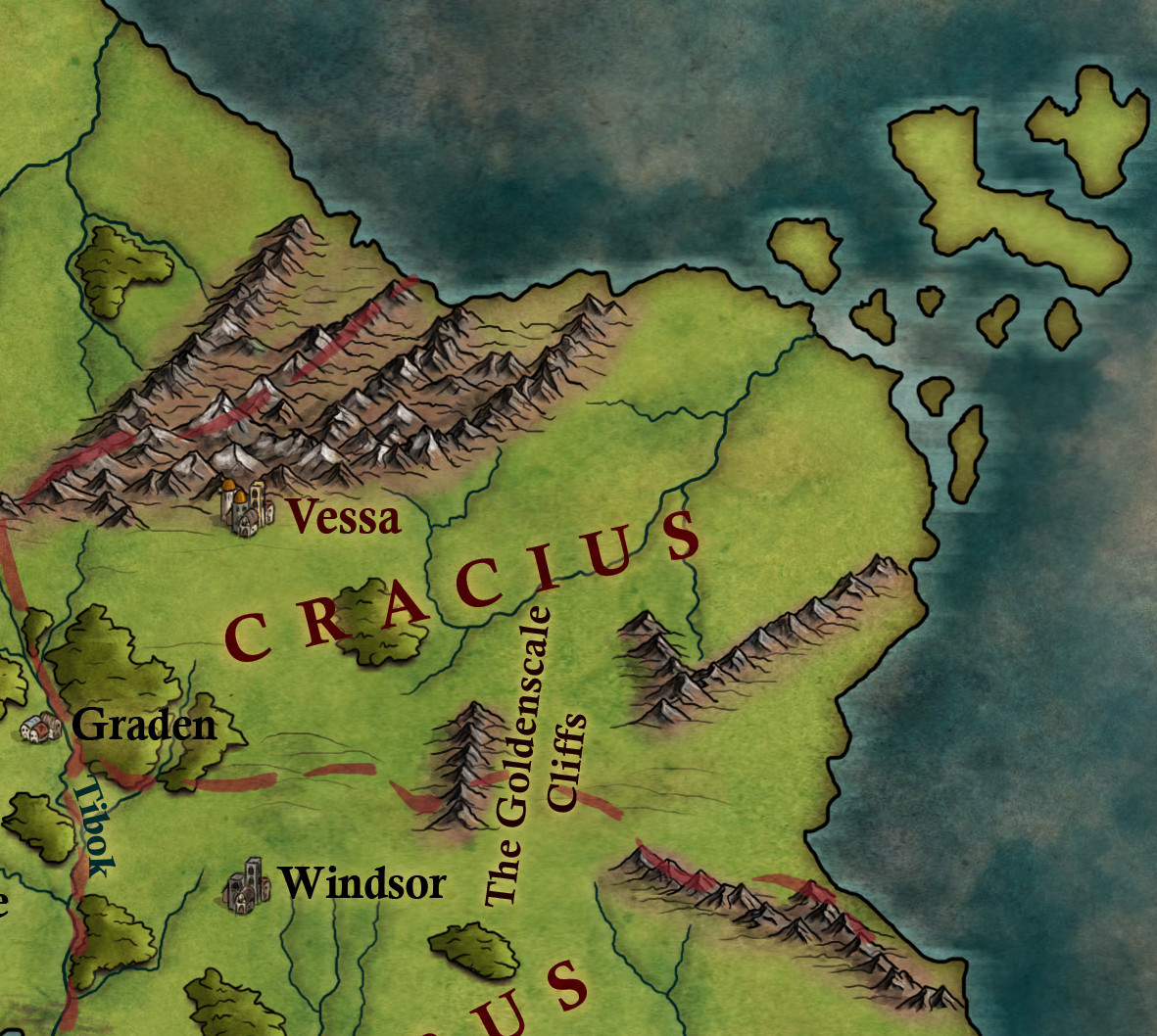 Cracius was the turning point for race diplomacy upon the continent of Draconis, especially among the three prime races.  The elves of Cracius were among some of the friendliest toward the humans, and the dwarves and humans fulfilled a symbiotic relationship of trades.  The avarians also expressed friendliness toward the other races.

The naga and harpies helped to solidify the companionship between the four goodly races of the country.  Being common enemies, it united humans, dwarves, elves and avarians, who fought diligently against the naga and harpies for centuries.

On Flamedays, 23, 917, an avarian named Braccada fell from the sky, landing within the fire of a dwarven camp that was on its way to a new mine which had been built in northeastern Cracius.  The dwarves thought that they were under attack by some unseen force, which only left Braccada in the fire longer, causing him grievous wounds.

Eventually, the dwarves rescued the avarian from the campfire, opting to bring him to the nearby elven city of Quen’allur for healing.  On the way there, Braccada was irrefutably weak, whispering in an unknown language to the dwarves.  When he was given to the care of the elves, they discovered that Braccada was speaking the language of the highborne harpies, known for their precognitive abilities.

A group of dwarves and elves transcribed, as best they could, the words Braccada was speaking, and began their travels to find the highborne harpies, passing through human settlements as they went.  When ascending Cracius, the group stayed at Prassa, the human capital.  Reginald Fagan, a leader of the humans, joined their ranks.  Eventually they passed through avarian territory as well, and two of the bird-people joined with them as well while they made their way to see the highborne.

The group reached the highborne harpies on the 14th of Obsil, 917, and finally told their tale.  Several of the companions had fallen to vicious enemies upon their journey, and the harpies, unbelievably, were gracious hosts to the fellowship.  When the dwarves and elves shared their transcribed message from Braccada, however, the harpies quickly changed their stance.

Braccada’s message alluded to a great evil falling upon Cracius, which would pit all the races against each other.  It all hinged on one human, who the harpies believed to be the son of Reginald Fagan.  However, when he confirmed that he had no son, his companions aided him against the highborne.  The message translated, the group fled for safety, leaving the harpies to their madness.

Over the next several months, all of the surviving members of the fellowship returned home.  Upon returning home, Reginald was named a successor to the human throne of Cracius.  However, when his wife was summoned to Prassa, Reginald discovered his wife pregnant, and near to her delivery date.

To try and avoid the prophecy of the highborne, Reginald Fagan had his unborn child killed while in the womb through the art of magic.  His wife became mad and eventually committed suicide.

Still, Braccada’s words were being uttered, despite Reginald’s sacrifice.  After several years, Reginald was driven to solitude, and disappeared, never to be seen again.

The Exodus of the Dwarves

The dwarves of Cracius had grown fearful of the prophetic words of their avarian guest, and prepared to leave the country.  A statue of Braccada was erected at the entrance of the dwarven tunnels, blocking access to it.

The race left Cracius within the year, bringing Braccada with them.  The dwarves traveled southwest toward Daltain, where many of them made their home.  In the absence of the dwarves and their avarian seer, fear was quelled, and silence once again fell upon the country.

Years later, a woman came forward with a kingdom shattering revelation.  She had bore the son of Reginald Fagan out of wedlock, confirming that she was his mistress.  Her son, Warrick, was the rightful heir to Reginald, and the true successor to the throne.

To help alleviate any fears that Braccada’s prophecy would come true, the council at Prassa decided to allow Warrick to rule under their guidance.  Since the disappearance of Reginald, the council had looked after Cracius without a figurehead leader, but would guide Warrick’s hand, in an effort to avoid the dark omens of the past.

The Journey of Enlightenment

As Warrick grew, he was told of the terrible prophecy surrounding the origins of his birth.  He trained to be a strong, benevolent, and levelheaded ruler, who the humans, and even the elves and avarians could come to depend on.

But still, the prophecy ate away at him.

Warrick wanted to prove Braccada wrong.  He wanted to let history see him as the do-gooder he was, and not as the potential cause of Cracius’ internal strife.  He wanted to be seen as a hero, and began his search for his own path, leaving Cracius under the care of the council that had worked hard at molding him into the gracious king he had become.

Around that time, Roark, the fallen king of Blacklehn, was raised by his curse, once again bringing his blight about Draconis.  Warrick joined forces with several other heroes, and worked to drive Roark back into the depths from whence he came.  Accounts even claim that it was Warrick who delivered the death blow to the undead ruler.

The Return of the King

When Warrick returned to Cracius, his deeds united the country more than anyone could have dreamed.  Through his personal quest, he had helped to solidify diplomatic relations that had proved the prophecy of Braccada to be false.

With his mind at ease, Warrick let life take him down other paths.  He became a husband, and a father.  He began extending his reach to the ocean east of the country, assembling the most powerful navy in Draconis’ history.  He then set to train the world’s greatest army, seeking to avoid any incident like the rise of Roark ever again.

The Curse of the Fallen King

All was not at peace within Cracius.  Day after day, Warrick was changing.  Some say that it was because of the stress of the fight with Roark, the nightmares that came from that encounter.  His family was the first to notice it, his personal behavior changing well before that stature of his ruling.  His wife, the queen, was often on diplomatic errands to other countries, and his son, Artemis, was training with the navy and military, honing his skills as a warrior and tactician.

Finally, Warrick Fagan snapped.  He ordered the capture of all of the other races within Cracius, not just the naga and the harpies, but the avarians and the elves as well.  He had many reasons for his decisions, but all were disjointed and chaotic.  Members of his military mutinied, disappearing within the wilderness of the country, and they too, became sought for capture.

Warrick’s wife reached out for aid, realizing that Braccada, the avarian seer, had predicted the future correctly.  Her husband, her king, had become the tyrant the prophecy had foretold.

Warrick found himself standing against the same heroes that he had fought beside against Roark.  After personal struggles, as well as a great war that pitted Warrick’s loyal military against that of Raleigh, and the liberated elves and avarians, as well as dwarves from Daltain and kobolds from Warus, the king of Cracius was slain.

Warrick’s son Artemis took the throne of Cracius, aware that the stigma of his family line sat against him.  But he took the first steps to alleviate some of the pains of his ancestors’ terrible decisions.  He released all the surviving prisoners of his father’s tyrannical schemes, including the naga and the harpies, hoping that it would give them some common ground in the future.  He redistributed the land for the other races as well, withdrawing his forces from their territories.

Cracius also disbanded most of its military, as well as its naval fleets.  Many of the ships still commissioned became escorts for merchant ships.  Artemis wanted to show Draconis that it did not intend to begin another war.

Artemis Fagan is still the ruler of Cracius.  Though he is a young ruler, he is greatly respected and admired for his decisions.

Unfortunately, race relations within Cracius are strained.  None of the races are especially trusting of each other, although the humans are trying the hardest to restore the country to the state of peace and coexistence that was established toward the beginning of Warrick’s rule.