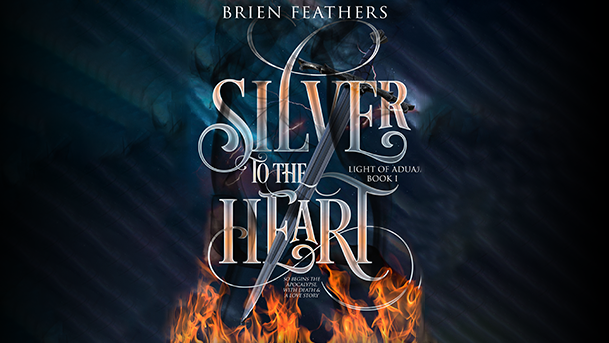 Welcome back to the Otherworld, travelers!  It was a busy weekend for me, as I’ve been scouring tons of books, and talking with a multitude of great storytellers, both new to Tellest, as well as old friends.  One such old friend is the talented Brien Feathers, whose recent debut has enthralled a slew of urban fantasy readers, but she’s ready to captivate even more.  Read on to learn more about her awesome book, Silver to the Heart.

Brien Feathers is passionate about the tale she writes, from the story that unfolds, to the world that exists just beyond our own in the shadows.  But what she truly enjoys and excels at, is writing incredible characters.  The cast of Silver to the Heart (Light of Adua, Book 1) is the main selling point of her writing.  Each of them is captivating, and charming in their own way, and readers can’t help but to grow attached to them as they make their way through harrowing dangers and apocalyptic warnings.  With such complex, dynamic, and catching characters, its no surprise that they’ve become new favorites for urban fantasy fans.

So begins the apocalypse, with death and a story of love

An old soul (several centuries old), the lover, fighter, and telekinetic Drake receives an order to safeguard Ana, a mortal with Elder Talent.

Ana, an artist beset by haunting visions, falls for the perfect stranger while venturing home to mediate emergent family chaos.

Past-warlord and present commander Sasuke wields his telepathic might to outwit Council traitors in an effort to save the human realm and its Guardian from a new Dark War.

Criminal and light bender Lou, now sought by the Council to answer for his sins, seeks shelter with the Reverend—an Elder fit to bypass rules of magic meant to be unbreakable.

As time’s last grains of sand deplete, an ancient battle may renew, with pieces of the fractured realm imperiling man’s modern world. Though few on Earth are cognizant, dark days now lie ahead.

Though Silver to the Heart is the first work that Feathers has published, you’d be hard-pressed to believe it.  It’s full, it’s wild, and it’s refreshing, as though she’s been at work on it, honing her craft for a lifetime.  The cast of characters that she introduces really makes the world stand out, and gives it a chance for wonderful longevity.  Her writing craftsmanship connecting them to the unfolding tale is magnificent as well, with the prose appearing carefully thought out and expertly executed.  If you’ve been waiting for a new urban fantasy, the wait is over.  Check out Silver to the Heart (Light of Adua, Book 1) on Amazon today!

One thought on “Urban Fantasy Promo – Silver to the Heart (Light of Adua, Book 1)”