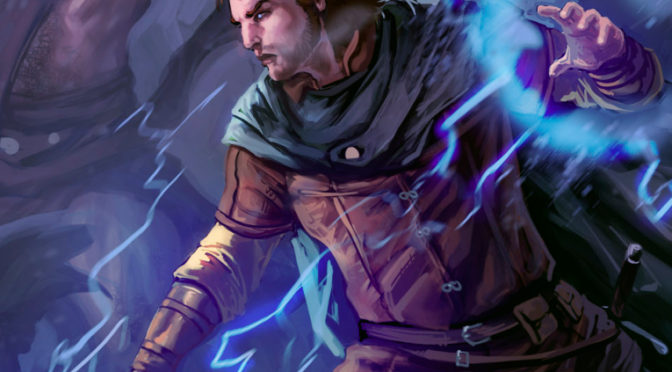 Howdy folks.  This is the first time that we’ve had the occasion to bring you two “State of Tellest” posts so close together.  I’d say that is a very good thing, because it means things are coming together at a quicker pace than ever before.

Part of that could be due to the fact that Tellest now encompasses so many different projects, from a handful of different people.  Let’s get right to it, shall we?

A while back, we had mentioned that Brandi Salazar was brought on board to help us clean up our act—Act I, that is, to be clear.  She’s done a very good job of putting a further layer of shine on the stories from the original Tales of Tellest volume.  If you are one of our readers from the get-go, you should be able to update your reading devices to get some cleaner prose than before.

We’re coming along well with the Tellest Legends books.  The timeline is still looking promising, and we’re getting ready to run our second wave of edits on Lord of Thunder, starting today!  Those edits should go relatively quick; I’m assuming that the book is going to end up being roughly 4.5 hours total in reading time, so usually, my second pass takes about that long as well.  Then, it’ll go to our two wonderful editors, and we’ll get it ready for the Tellest Street Team prior to the March release of the book.

Since it’s November, most of the focus has been on the NaNoWriMo book (more on that in a moment).  We have to shift again in December, back to Dragonspeaker (which is first-pass complete), and to Stealing Seramore, which needs to find its feet again.  Arise, meanwhile, has been seeing some steady progress.  I write that book on the train to work in the mornings when I’m in my satellite office, so that’s been doing well.  I have a feeling that is going to run longer than the previous books of the new collection, but I’m still optimistic that we’ll get that prepared in time for the planned release date. After all, it’s still 2016!

I’m very happy to announce that we’re moving back into position with the Tellest short stories.  In fact, I made a whoopsie and didn’t include one of Aaron Canton’s shorts in the Tellest Newsletter as an exclusive like I believed I had, so we’re starting the new shorts up again today!

With my focus on the longer form novellas and novels at this point, I’m going to be letting Aaron helm our short story department for at least a little while, but I’ve got a handful that I want to put out before the second short story collection comes out in 2018.  Don’t forget, we’re trying to release at least 24 new shorts—but you’ll be able to catch most of them here first.

I went from believing that my NaNoWriMo project, The Silver Serpent Chronicles, was going to end up being too short to fit the 50,000 words required to be a victorious novel.  As it turns out, I’m probably set to reach at least 75,000 words by the time the story is done.

Now for the bad news: I lapsed!  Between funerals, podcasts, noodgie dogs and just a little bit of writing burn-out, I fell about 3,000 words behind.  Now, that’s not exactly difficult to make up—I’ve had 4,000 word days before, and with a four day weekend in front of us, I can likely make that up—but it is just one more obstacle before me.

In any case, I have my doubts that I’ll be able to finish the project in its entirely in November.  What we’ll probably end up doing is shifting some things around to find a focus on the books that are coming out sooner rather than later.  I have to do the same thing for last year’s NaNo project, which is even longer than this one.  Once I fall back into that one, we’ll be in a very good place.

Phew… tired of reading yet?  If you are, I’ve got some great news for you: the first round of audiobooks are complete, though we’re still waiting for ACX to approve the fifth and final “Tales of Tellest” novella, Awake.  Once that’s done, we’ll have five books in audio form, and that’s a pretty cool feeling.

We had considered also having the short stories produced for ACX/Audible, but there are too many hoops to jump through to do that properly, so the idea we’re entertaining instead is bringing on another voice to our team in order to capture the short stories in audio and deliver it straight to our site.  We’re still prepping that relationship and those goals, but keep your eyes and ears open for that in the near future.

Further away, what we’re anticipating for our audio goals is that we’re going to work on getting most of our novella and novel length projects narrated a lot earlier in the game.  Previously, we waited to see if people enjoyed the written content of the Tales of Tellest novellas before we moved along.  This time, we’re going all in on day one.  The day the new books release, they should have the appropriate level of polish, and we’re going to begin the process of prepping them for audio.  For sequels, we’re anticipating continuing along with the narrators of the first books in each series.  For new properties (Dragonspeaker, Heart of the Forest, Silver Serpent Chronicles), we’ll look for new narrators to bring to our team. There’s a very real chance that we’ll end up running over ourselves eventually.  20 weeks isn’t that long when it comes to whipping up some decent audio, but we’ll see what we can pull off!

Yes, we’re still working on this little side project!  In fact, it’s coming along very nicely.  All of our alpha art content is completed, though there has been some thought given as to whether or not we could get one or two more sets of assets.

In any case, we’re getting ready to prototype our game in the coming weeks.  Christmas is a great time to test how all kinds of different people enjoy the game, from nerds to regular ol’ folk.

The great news is that even when we had zero art, the game ended up being a lot of fun to people who liked tabletop.  I’m hoping the gorgeous art we’ve been acquiring for around 18 months really helps to step up the enjoyment of the game even further.

You can see the latest cards—full cards—on our Facebook page. There are adventurer cards up now, but we’ll be showing off a selection of dungeon cards in the coming weeks as well.

Now, there is a spot of bad news here.  Since this is the first time we ever put together a tabletop game, there’s still some things that I’m trying to put together and understand.  The timeline is one of the things that I didn’t realize was going to be so hard to stick to.  Here’s our dilemmas so far:

We aren’t going to make it to Magfest and PAX East (sold out, drat!).

What we are still going to try and do is make it to AnimeNext, Philly Comic Con and Metatopia next year.  I really want to run the circuit for this game, and if we see a lot of genuine enjoyment out of it, we may try and jump into some other places as well.  The ultimate goal is to try and Kickstart this game, ala Boss Monster, but we shall see what we can pull off.  I’m very happy with the journey this game has made (even though I still haven’t settled on a final name for it yet). Time will tell if the destination is a happy one!

That’ll about wrap us up.  Even though it’s only been a month, it seems we had plenty to talk about.  Here’s hoping the next time we get to chat, there’s even more incredible Tellest news.  Thanks for tuning in!