Greetings once again from Pixel Land.  How is everybody doing today?  It’s been a long while (well, for me it’s only been a few days because I’m scheduling this post well in advance), but we’re finally back with some fresh sprite art to show off from our card game.

You’ve already been shown the dwarves, the elves and the gnolls, and in keeping with our alphabetical order of things, it’s now time to show off the gnomes!

There you’ll see our mighty five.  Just like the previous groups, these gnomish heroes come in different shapes and sizes, and their personalities don’t necessarily match either.

Without further adieu, let’s get a little closer to these folks, and see what makes them tick:

Ana Hilluff is a thief with some kind of Robin Hood-esque qualities. She’s got plenty of good intentions, but she doesn’t care so much about what pains she may bring to others to arrive there.  When you’re as petite and vulnerable as she is, you take extra steps to assure your survival. 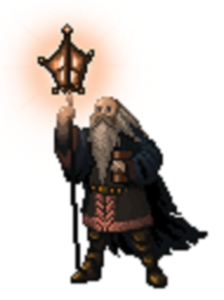 Known as the lightbringer among his people, Berras Ames has only grown more fearless in his old age.  When a mysterious dungeon appeared near his home, he knew that he needed to make a pilgrimage into its depths.  He believes that only he can make sense of the dark and dreary place, though he wouldn’t mind some of the treasures that may await below.

Few among the gnomes believe in the tales of Gnoemi, a thief who has mastered the arcane arts as well.  Perhaps that speaks volumes to her talents, as she surely does exist.  She’ll pit all those skills against the dungeon that has appeared in the wilderness. 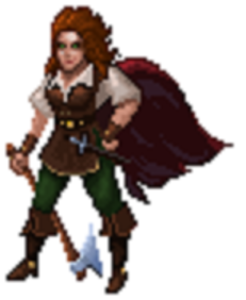 Luna Aren defies the size of her people, and brings the hurt wherever she goes.  A citizen of Hillheim, she’s accustomed to life among gnomes, dwarves and humans.  She never let her diminished height affect her courage, and she’s comfortable using many different kinds of weapons.

Urrabar Riese doesn’t quite look the part of the thief, but he plays his role well.  More a hunter than anything, he’s used a combination of all his skills to survive the harsh wilderness near the mountains of Daltain.  Some say he’s lucky, and others say the name Urrabar is just passed down from one incredible gnome to the next.

And here’s the whole crew, side by side.  This one might be a little more interesting, in that two of these gnomes may have met before.

Stay tuned for the next set in a few weeks!