Hey there folks.  This is another one of those times where we have a sprite to show you from a game that we haven’t announced yet!

This sprite artwork that you’ll see here is not indicative of what the final game will look like, but it’s important to see where we came from.  These initial graphics are all a part of the journey to our final project.

Chris started us off with a black and white variation of our character. Gnoemi is a thief with some magical tendencies, hence her dagger that’s been made of ice.

Chris took some cool liberties with the character, and kind of made her similar to the miniature thieves with the bags from golden axe. 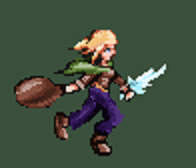 Here, you can see an embiggened version of the character.  Now, remember, this isn’t quite what we’re left with anymore, but it’s a good idea of where we came from.