Over the past couple of weeks, we’ve taken a few looks at other worlds, or takes on ours.  I bet you’ll think you’ve seen it all, but how’s this for a stop to the Otherworld?  Today, we’re actually witnessing someone from Earth taking a stop in another world!

Matthew Carter brings a very interesting tale to light with The Genesis Portal, which can be described as a Science Fantasy story.  It follows a man who imagines and then meets the woman of his dreams, and Carter captures the tale in such a way that you simply must turn the next page over and over again to find out how everything pans out. 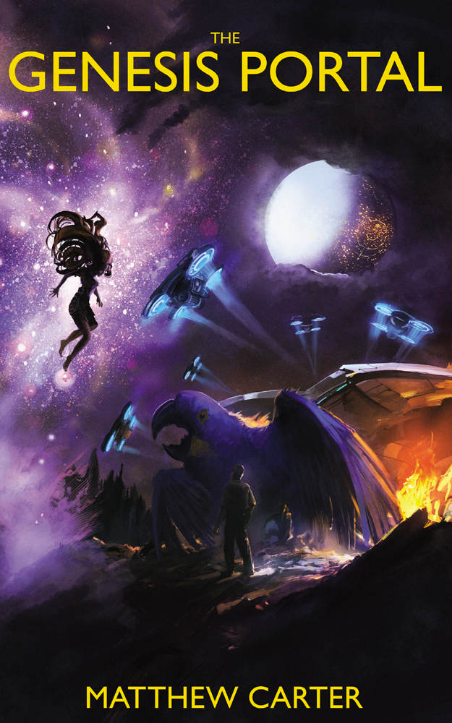 Every night since he can remember, Jasper has been haunted by the dreams of the same beautiful woman. Sanya has been there for him his entire life and over the course of time, the two have come to steadfastly believe she is more than just a figment of his imagination. Sanya claims she is alive and real, trapped somewhere that she can’t wake up. Convinced he must rescue her, Jasper is determined to cross space and time to finally find her.

If only Jasper knew he’s not the only person looking for her.

The Genesis Portal is a sci-fi fantasy novel that will take one man across the galaxy in a high-stakes journey for a woman who’s beyond ordinary – a woman who just might hold the fate of the entire universe in her hands. It all depends if he finds her first.

What readers have said:

“While I read a lot of science-fiction, I have generally stayed away from anything hard core simply because I feel as if plot and character development are often lost in world development. Still, the concept of The Genesis Portal was so intriguing, I had to give it a read. And I’m glad I did! While there are certainly elements that will appeal to even the most hard core sci-fi fans, there is an extraordinary amount of character depth. I was so intrigued by the relationship between Jasper and Sanya – their interactions and emotions came to life on the page and are really the center around which the entire story revolves.

“That being said, these characters exist against a well-crafted backdrop that colors their world in the most original way possible. I have to say that the author wasn’t afraid to stretch boundaries and think creatively, going against the usual grain. And that’s what makes this book such a diamond in the rough. The plot is strong, if a little slow to develop in a way that makes things immediately clear for the reader. I would definitely recommend this book to anyone who loves science fiction of any sort, but also to those who love a good love story. I’m eagerly awaiting more work from this author!”

Obviously, as you can tell, The Genesis Portal is being favorably reviewed.  When you read a few pages of Carter’s work, it’s easy to see why.  It’s a fun, deep read, and you’ll likely agree that it’ll be nice to see more work from this incredible author.  You can pick up The Genesis Portal on Amazon today!