Check out some of the places you’ll find in the dungeon:

First up today, we have our antimagic chamber.  Adventurers can’t use any of their special abilities in this room, which is already a hit in the gut, but it also prevents you from getting a lucky roll and gaining extra mana.  And of course it also damages one member of your party.

This variation of the card is kind of cool because it has a promotional sprite in it.  We opted to take him out because we felt like this version of Kaos didn’t really fit with what we were trying to do. 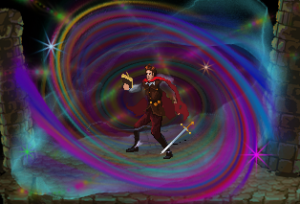 Instead, we gave one of our other characters a chance at the spotlight. 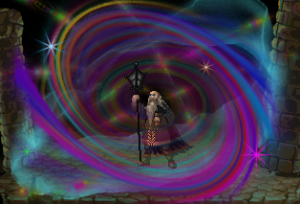 Berras Ames is one of our gnome adventurers, and he typically has a shining lantern atop his implement.  Because of the antimagic chamber, though, that light has been snuffed out!

Gross.  This blood demon is made of—and hungers for—that lovely crimson life force.  While most perils in the dungeon have an equal chance to deal damage to just about anyone, this denizen of the underworld takes its aim at the healthiest heroes.  They have the most blood to spare, after all.

This is one of my favorite dungeon chambers.  Every now and again, your adventurers have a chance to set off a spell, and this one in particular can be kind of rough.  It’s one of the more powerful rooms in the game, and when you own it, it can be a real game changer. 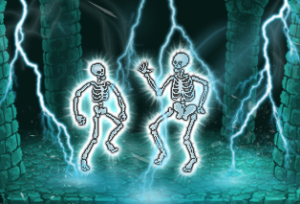 This set is actually full of some of my favorites.  I really like the way Sergei put this fellow together.  Usually, when you’re trying to gain control of the dungeon, you’re moving forward.  The second you confront this guy though, he has you moving backward instead. 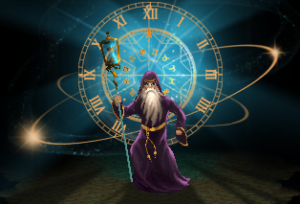 This is one of the worst chambers to land in.  When you do, you instantly lose control of one of your other chambers.  The good news is that its too powerful to be controlled by any player.

I love the way this one looks, too.  It almost feels like if you look at that darkness in the center, it spreads.  It’s a really cool effect. 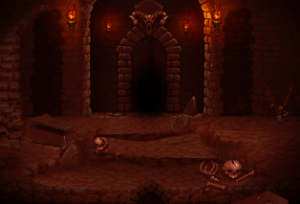 This guy holds one heck of a grudge, it seems.  Perhaps he’s a little upset that one of his cleric buddies didn’t do enough to keep him alive.  In any case, he takes his rage out on healers more than any other party member.  Good luck to whatever clerics come through this room!

Here, we have a very similar room.  These demons know that the mages who venture into the dungeon have the power to send them back to whatever realm they came from, though, so they target the various arcanists that they find.  That’s incredibly dangerous too, since mages are known to be among the squishiest of all the adventurers. 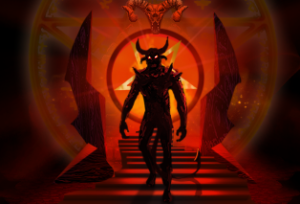 Another room that has a connection to one of the others.  Whereas the blood demon hammers away at the healthiest heroes, this spell trap weans away the health of the meekest adventurers.  This can really disappoint you if you’re down to one hit point and you’re trying to keep your character safe to score one more room.

Arguably the most important room in the game, this is where you start, and where your characters continue their journey.  Every time your heroes think that they’ve made it through the dungeon, they end up back at the start.  But it’s not all bad news.  The Entrance sort of acts like Monopoly’s Go.  It’s a safe place, and it gives players mana, the currency of the game.  Unfortunately, the only way for the adventurers to make their way home is to gain control of the dungeon, so in through those doors once more they must go. 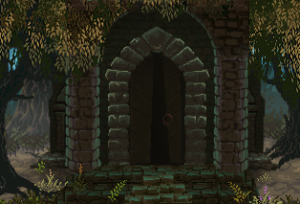 This is a heavy hitter, for sure.  Golems are known for packing a punch, but the good news is that they don’t usually care unless a lot is going on at once.  If you’ve got a small party, you’ll make it through without catching the attention of one of these big brutes.  But if you have a larger force, you can be sure one of them is going to take a hefty bit of damage.  And if you’re playing with more than two players, and this room is haunted, it’s almost a guarantee that one of your adventurers is going to bite the dust. 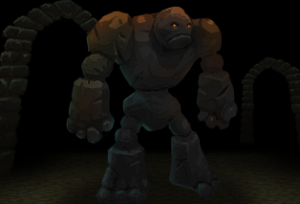 It’s like the Golem Foundry, but worse.  This particular dragon doesn’t care how many people show up—he just wants some carnage.  He deals just as much damage as a golem, too.  This is definitely one of the more important chambers to gain control of as you play the game!

Well, that’s it for this set, but before the end of the month, we’ll be back with another set of chambers.  What dangers do you think you’ll see before we launch our Kickstarter?  Stay tuned!