Phew, now that was exhausting.

As many of you may know, I participated in NaNoWriMo this year.  It was a completely new experience for me, since most of the writing I’ve done for Tellest thus far has been pencil to paper in a notebook before it’s transferred to the computer.  In that way, I end up editing my book twice as I write it.  For NaNoWriMo, I knew that I was going to have to leave that kind of writing to the side, or I would never make my target word count in time.

50,000 words in 30 days is something that seemed a little beyond my skills, but as of today—with one day to spare—I’m proud to announce that I was able to meet that lofty goal.  I’m a NaNoWriMo 2015 winner.  Heart of the Forest is well on its way.  At that word count, we’re at about 100 pages written, and I’ve just started the twentieth chapter.  It’s still a long way to go, but I’m committing to a new task going forward, as a result of this first NaNoWriMo experience. 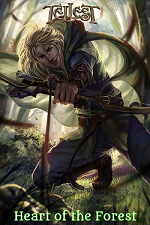 From now on, I’m going to write at least one chapter of a story per week directly on the computer, just like I’ve done throughout this November.  It’ll be my writing in its rawest form, so it won’t necessarily be the best display of my ability, but it’ll fulfill my promise to you that there will always be more content from Tellest that is ready to read.

Now, this will go on to serve two purposes.  First, it’ll mean that there will be more stories to read at a quicker pace.  My guess is that Heart of the Forest will be around a forty chapter story, so I’m about halfway there.  At this rate, I’ll have it done by the end of April.  At that point, it’ll be time to sit down with it and throw in some heavy edits to make sure that it’s a story worthy of your attention.

That brings us to our second purpose.  Writing in that style gives me the golden opportunity to bring my stories to you a lot quicker than the way that I currently do.  The Tellest Patreon page is the place where chapters of Heart of the Forest are currently being uploaded every Wednesday.  You have to be a patron to get early access to those snippets, but I’m announcing today that you only need to spend $1 a month to get that access (it used to be $3).  And here’s some even better news: even if you’re not a patron, there’s a chance you’ll see some of our exclusive early content there.  There’s a 1-in-3 chance you’ll see the art we commission early, and there’s a 1-in-10 chance that you’ll get to read Heart of the Forest early.

And I guess that kind of serves a third purpose then.  The more people that we know we’re working for, the more diligent we are.  If you know anyone who wants to be a part of that, let them know.  Tellest will only grow because of it!

Last but not least, I wanted to let you know about Tales of Tellest.  We started this campaign a long time ago (it’s almost been two years!), but it’s about time that it’s wrapping up.  In the next couple of weeks, all five novellas will have been released, as well as all twelve short stories that we committed to.  At that point, we’re going to be releasing the entire collection on Amazon, followed shortly after by a paperback release.  I wanted to personally thank everyone who has been so patient with all of that, and we’re looking so forward to bringing you that piece of Tellest.

Here’s hoping for more frequent updates in the future.  With NaNoWriMo just about wrapped up, we’ll be back to our regularly scheduled broadcasts!