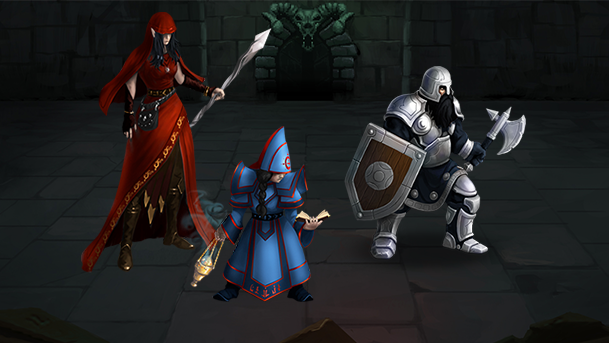 Well howdy folks!  We’re getting to a point now where Merge Dungeon has been out on Kongregate for over a year at this point.  While I’d like to think the mobile release is still on the horizon, there’s a decent amount of work that we need to do as a team to make sure that it is the best experience it can be.  Part of that relies on time, and part of it relies on budget.  But in the meantime, there’s so much Quantum Quest stuff to show over the next “however long” that I’m fairly certain it will take us well into 2023 if I do something like a three week rotation.  So, with that in mind, let’s start our slightly bunchier first couple of weeks, and take a look at some of the adventurers you’ll be fighting in the arena, starting with some non-hero characters.

Let’s actually begin with the tiniest of the goodly races, the gnomes.

You’ll see that we have multiple versions of the same characters.  For the “generic” characters, we wanted to have a few different options for color palettes, because we wanted to be able to give the perception that you’re running into multiple different opponents in the arena as you go along.  We therefore stuck to one class for the generics, and ended up with between three and four color swaps.  In later updates, we even went so far as to get weapon or armor swaps as well, which turned out pretty cool.  Our gnomes were clerics, and you’ll see above we had four different options.

Since we’re making our way up in size, why not go with the dwarves next?  Our dwarves were some of our warriors of the generic sets, so we gave them some shining armor across four color palettes.  You’ll notice that the beard colors also change, so that’s something.

We’ll finish off with our mages of this week’s set.  We opted to make our elves our mages since they seemed the most magical of the bunch.  You can see that Sergei gave us a lot to work with here.  The runic writing changes color, as well as the outfit, the amulet, and the staff.  Lots of stuff going on here!

That’s it for our first little showcase.  I’ll actually have more for you just before Halloween, where we see another sizable set of non-hero characters from the game, spanning some of our more colorful races.  Stay tuned!