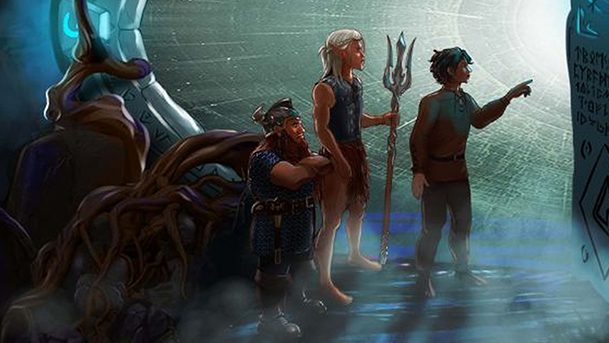 Greetings fantasy fans!  We have got an awesome treat for you today, and it’s one that I cannot wait to share with you.  We’re partnering with a talented author from overseas, Nathan D. Latrev, and helping him to spread the word about his translated book.  It’s the kind of tale that is sure to delight, so let’s not waste too much time.  Read on to learn more about Latrev’s book, Juvenile Tribulations.

Author Nathan D. Latrev had already unleashed his incredible fantasy debut on his native France, but English speakers can now delight in the tale as well.  Juvenile Tribulations, the first book in the Isthariun’s Dreams series, is captivating and suspenseful.  Beyond rich and vast worldbuilding, the author stiches together a perfect tapestry of storytelling and character growth.  Latrev develops his story with a great sense of humor, and with characters who are fun to witness as they interact with one another.  Juvenile Tribulations turns a lot of fantasy tropes on its head, especially those related to the fantasy races.  You’ll see refined dwarves, aggressive elves, and almost flowery dwarves in Latrev’s world, instilling the genre with a much needed breath of fresh air.

Latrev narrates his story with a sort of poetry to the prose, a win indeed, especially as the book has been translated from French.  With a cadence and a descriptive palette that draws readers in, the book is addictive and easy to lose yourself in.  Before you know it, you’re enthralled by the adventure.  Fans of fantasy that are looking for something with tinges of familiarity, but that also bravely strides forward will enjoy this book.  It will be out in just under three weeks, but you’ll no doubt be entranced by it once you get your hands on it.  Preorder Juvenile Tribulations: An Epic Fantasy Adventure! (Isthariun’s Dreams) on Amazon today!