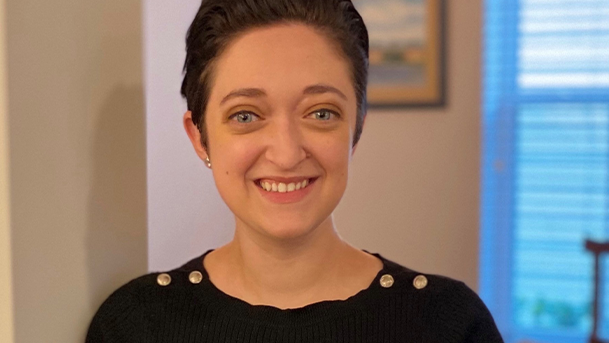 I was recently given the opportunity to work with T.R. Hamby, the writer of several wonderful books, including the story of a different kind of fallen angel in King of the Wicked.  Hamby is consistent with her work, as the other two books she’s published as of this writing are just as phenomenal.  Read on to find out more about what makes Hamby tick.

Tellest: Hi there T.R.!  I appreciate you taking some time to participate in this interview.  I’ve seen how quick you’ve cranked out your second book after your first one launched, so I know you’re likely hard at work outside of this chat.  I’m looking forward to helping your budding audience get to know you and your books better.  Let’s get right to it!

T.R. Hamby: Thank you for chatting with me!

T: Your author bio states that you started writing once you were tall enough to reach the computer.  What stories or authors or people in your life inspired you to start telling stories of your own?

TRH: Before I could reach the computer, I was inspired by children’s movies and fairytales. I would draw pictures depicting my own stories. Then, when I was able to read, authors like Beverly Cleary and Barbara Park convinced me that I could write stories like them.

T: What are your favorite children’s movies that you’ve used to spark your imagination?

TRH: The Harry Potter series are some of my favorite childhood movies, and I do think they influenced my development as a writer. The story has a thick plot, rich characters, and is a mixture of genres–fantasy, romance, action. They’re also based off the novels, too!

T: The first book series you began publishing on Amazon is the Banished series.  It’s also the series in which you’ve released the latest story.  What made you decide to work on King of the Wicked and Queen of the Immortals, and how were they inspired?  Did you know it would be a series when you began on it?

TRH: I was inspired by the story of Michael the archangel, who sent Lucifer to Hell in an angelic war. I wondered what would have happened if Michael had decided to be merciful to Lucifer instead. The idea grew from there and inspired me to begin to write about an angel who was wronged by God, and who was banished to Earth for eternity. I always knew it would become a series; I love my characters too much to let them go! 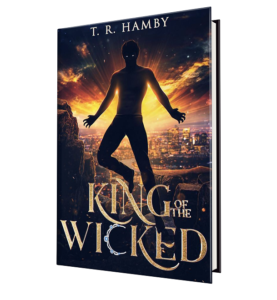 T: By the end of Queen of the Immortals, there’s still plenty of room to explore the characters and the world you’ve built for The Banished Series.  Can you confirm that readers can expect a third book in the series?

TRH: There is a third book coming, and it is full of twists and turns! The characters are about to discover so much more about their world, and about God, who has been pretty mysterious this whole time.

T: Is three the magic number, or do you suppose you have room for more in this little universe of the angelic you’ve been creating?

TRH: It depends on where things go in Book 3! But a fourth book is a big possibility. My characters have a lot to say.

T: If you were going to write additional material in the Banished Series, do you think you would be writing another sequel, or could you see yourself writing a prequel?  There’s a ton of time between the flashback in the beginning of King of the Wicked and the modern-day time period.

TRH: A prequel would definitely be a fun twist to the series! I also think a spin-off, told from the point of view of new characters, would be a lot of fun to write. Those ideas are definitely in the back of my mind!

T: Over the last three months, you’ve released three books on Amazon.  Are you just a ridiculously quick writer, or do you have a massive back catalog that you’re funneling into Amazon?  Either way it seems like readers have a lot to look forward to!

TRH: The characters are honestly what drives my writing. They tell their own stories so boldly, so it’s been easy to follow them on their journeys and write as I go along. It has been fast–it’s been a rollercoaster ride, and our heads are spinning!

T: So, one of the things that I see you do a lot is help other authors spread the word about their own books.  Throughout your Twitter account, you can see that you’re always looking to tell people about the next big book, no matter the genre.  Are you part of any writers groups or are you just finding books you enjoyed and sharing them along with the authors?

TRH: I really enjoy spreading other writers’ work. The writing community on Twitter as a whole is very caring and supportive, and we’re all eager to spread the word about each other’s stories. There are some true gems being shared, and I want them to get to as many people as possible.

T: The Banished Series is not your only brain baby.  You’ve also got a mysterious and intriguing Victorian style suspense story called The Chatter that looks just as compelling as the rest of your growing catalog.  What can you tell readers about that story, and can readers expect any other books in that genre from you in the future?

TRH: The Chatter is about a young woman with a dark past, who goes to live with a wealthy family as their governess. Strange things start to happen to her….the mistress of the house is playing tricks on her, and the master is growing attached to her. The previous governess died mysteriously, and no one knows how. It’s a thrilling read, a romance and a mystery, with strong characters caught up in a dangerous game. I loved writing it, and I’m sure there will be similar stories set in this genre to come.

T: Beyond the third book in the Banished Series and any spiritual successors to The Chatter, do you have any other books that are gnawing at the corners of your mind?

TRH: I’m hoping to write a romance when the time comes. I’ll read any book with romance in it, and I’d like to put my own touch to the genre.

T: You’ve written an interesting romance in King of the Wicked!  What do you think makes for a captivating chemistry between two people?

TRH: Friendship is the best way to develop chemistry. The couples in my stories aren’t just lovers, they’re good friends, and I think that’s what really drives their relationships. Physical attraction is important, but it’s the friendship that makes good chemistry.

T: What are some of the challenges you’ve found in writing or publishing, and what advice would you give to others who are trying to break into the self-publishing industry?

TRH: I would have to say staying patient has been my trouble. Gaining readers and recognition takes a lot of work, and you really have to put yourself out there to get noticed. Having patience is the key to being successful. I also think that staying true to your spirit and the spirit of your stories is essential when self-publishing. Knowing your worth as a writer will help you as you share your work with the world.

T: What advice would you give to a storyteller who was just starting off, and eventually wanted to self-publish their own work?

TRH: If I could go back and give myself advice, I would tell myself to always keep reading and writing. You learn so much from those two things–you get inspiration from the other writers out there, and you develop your own writing style, and your own stories. It’s hard when you have writer’s block, but just writing anything will help you get through it. Writing is always the answer. 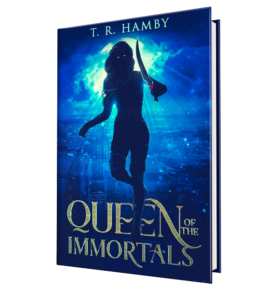 T: With as much as you’ve got going on with all your books, there’s still a lot for folks to find out about you.  Where can readers go catch up on news about your releases?  Do you have a newsletter?

TRH: You can find information about my releases under my Twitter account, @TRHamby1. You can also check out www.trhamby.com for my author page.

T: T.R., I want to thank you once again for taking the time to chat with me about your books, your writing process, and what’s coming next for you.  This past year has been a tough one, and I’m sure people love diving into great books like yours that help them escape to another version of our world!

TRH: Absolutely! Thank you for taking the time to chat with me!

T.R. Hamby’s most recent books are King of the Wicked and Queen of the Immortals, both books in the Banished Series, as well as the standalone dark thriller, Chatter.  Hamby is definitely a storyteller to be on the lookout for, and you can bet we’ll keep you up to date on any releases she sends out into the world.  Check out King of the Wicked on Amazon today!